CH →
Walkthroughs →
In The Wake of Gods → Gorynich
﻿

Recommended bonus: whatever you wish (I chose wizardry)

First, collect all the resources around. When you find a chest, and you have to choose between 0 gold and -500 experience, choose 0 gold because you WILL have -500 exp. While exploring, you should find a monk. Don't visit him unless you see the puzzle and the other monks east. After that, talk to him and he will disappear and give you access to the puzzle. This is probably the trickiest part of the map. What you have to do is, make a column of the same terrain. Here are some hints:

You can divide the task in 3 parts:

If you still don't get it, then visit the monks randomly. You will get it eventually. It's like a game of rock-paper-scissors or tick-tack-toe. After you take the grail, make sure that you've saved the game! Get out of there and walk west. Gorynich should tell you that he built a castle, which looks like a cave. Enter it, leave the pikeman there and demolish each and every building (right click on a building to demolish it), except the blacksmith, which you can't demolish. Exit the castle screen and walk one square down. You should receive warning messages, which tell you that you will be eliminated from the game. Stand near the castle for 6 days. To the west of the castle, is a little forest, which is burning. When a message says that you have one day to capture a town, go to the castle that you've destroyed and you will fight a pikeman. Hire 5 ghosts from the blacksmith and leave through the burnt forest. Save the game. 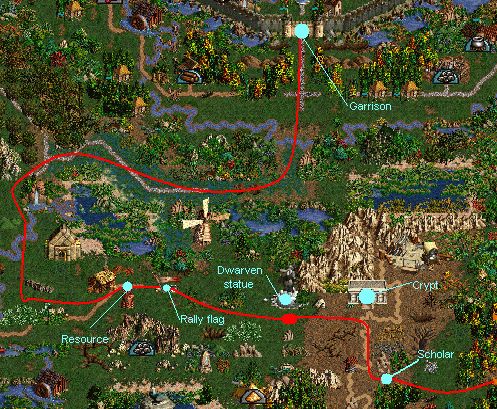 Go to the scholar and then walk to the left a few squares and then, north, and then towards the dwarven statue. You will stop there and have only 3 days to capture a town, even if, before you stopped, had 5,6 or 7 days. Go west, and visit the rally flag. After that, collect the resource, right on the left but don't pick the campfire. You should see the unicorns to the west, go towards them a few squares, and go up immediately! You should see a gravel road. Walk to it, and go east, ON the road. After you see the clearing, walk north towards the garrison. When you reach it, go up one square to activate the trigger, or else you will be eliminated. Take a look at the picture below if any problems...

Once you are in the town, take the creatures that want to join you, and visit their dwellings. Make sure that you've visited the dark-yellow tower, so you will able to "see again". After you can't recruit anymore, leave the town. Walk around, and when you go to the peasants, don't pick them! Fight them, so you can improve the number of your ghosts. Visit the peasants' houses until you get about 300-400 peasants. First fight the 1st level creature to improve your ghosts. There should be an imp cache around...

There are 3 enemy castles that you must demolish: a fortress, a rampart and a necropolis, which is blocked for the moment. Once you have about 800 or so ghosts, attack the fortress, which is in the NE corner of the map. Make sure you've attacked all the gnolls around and dragonflies attack the lizard warriors, which defend the heroes. Split the ghosts in two packs and ATTACK. Fight the enemy hero. Watch out for the frost ring...it can hurt BAD. After you defeat him, there should be some gnolls around, so attack them. Should be piece of cake for your ghosts...Attack and demolish the fortress. Do not go back to it! Kill other creatures that are around and go back for more peasants. Use the quick-battle option if you don't want to fight yourself. After you've gathered around 300 peasants again, fo to the rampart which is in the SW corner of the map. Defeat the centaurs, dwarves and elves that are around, including those that defend the enemy hero. His main spell is slow. Before you fight him, you should spread the ghosts in 2 packs again. Defeat him and demolish his castle. A message should appear and ask you if you still believe the Gorynich. Answer "No". Explore the map...

There is a sanctuary in the east of the map. Talk to the scholar near it. Go south and visit the war zealot. A message will pop-up and ask you if you want to attack him. Answer "yes". Pick the chest. Go west, through the trees and bushes. It might not seem passable, but it is. There is a monk there. Go to him, and he will join you if you do one last thing for him...

There is a crypt in the south of the map that you can see in the 1st picture. Visit it and fight the guards. Now you can go to the Necropolis town, in the NW corner of the map. It should be harder to fight the necropolis hero and the castle, so make sure that you've killed all the level 1,2,3,4 and 5 units on the map. You should have about 1500 ghosts, so attack the Death Knight (Vokial, I think). Attack and demolish his castle. Go back to the monk that asked you to do something for him, and...TADA! The map is completed!