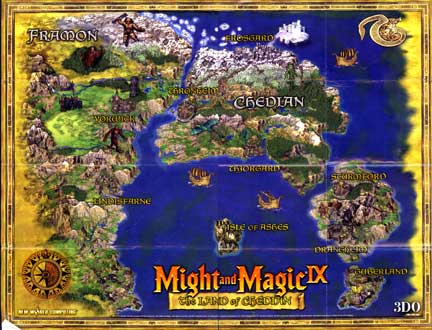 In many ways, MM9 is the best RPG yet in this highly respected series -- well above that of MM7 and 8. The basic, underlying game design, balance, originality, maps, etc. all are superb. As you would expect given the financial turnaround and industry upheaval as 3DO was releasing this game, there are some glaring trade-offs in the implementation of MM9 that detract from the game. A reasonable guess, with no confirmation from 3DO, is that things like the lack of flying, relatively little environmental eye candy, poor documentation, and others were difficult development cost tradeoffs that 3DO was forced to make. The first patch (v1.2) addressed a couple of these. Hopefully more patches are forthcoming that will fix the worst of the issues. There are the usual number of bugs for a new release. The most troublesome of these are scripting issues. And there is one major UI flaw (the dreaded "Promotion Quest Lockout") that is a killer! This flaw is the equivalent of Wizardry8's horrible "Retreating Enemy bug, or Diablo2's lack of an out-of-village save. Make this mistake, and you can have no way to recover days or weeks of play except to start again! Make sure to read the "Bugs and ONE HUGE WARNING!!!" topic BEFORE you begin to play.

Might and Magic IX (interesting -- no official subtitle like "Day of the Destroyer" or "For Blood and Honor) is vintage John Van Caneghem. Your innocent little band must united the clans of Chedian and save the continent from destruction. Sometimes you do it with brains, sometimes with diplomacy and a gentle word, and often the old-fashioned way -- with some serious head bashing. MM9 lives up to it's promise of " fewer enemies ... but smarter." Gone is the MM7 and 8 overuse of Wars of Attrition (you against a zillion basilisks, pirates, or ogre mages.) A carefully crafted and trained team is far more important than the most recent MM titles. This is like the classics in the early part of the Might and Magic series again.

(Thanks RedFox .. apparently MM9 was originally subtitled The Writ of Fate. No known reason why this seemed to disappear from the packaging. Anyone know why?)