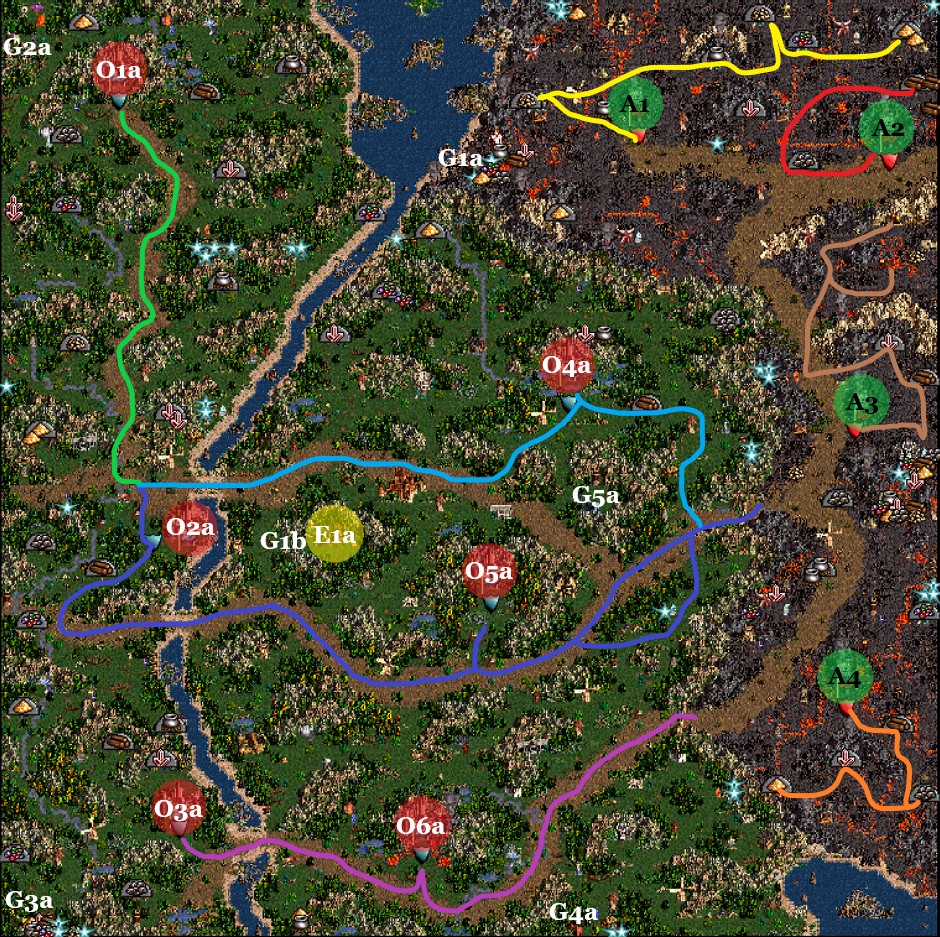 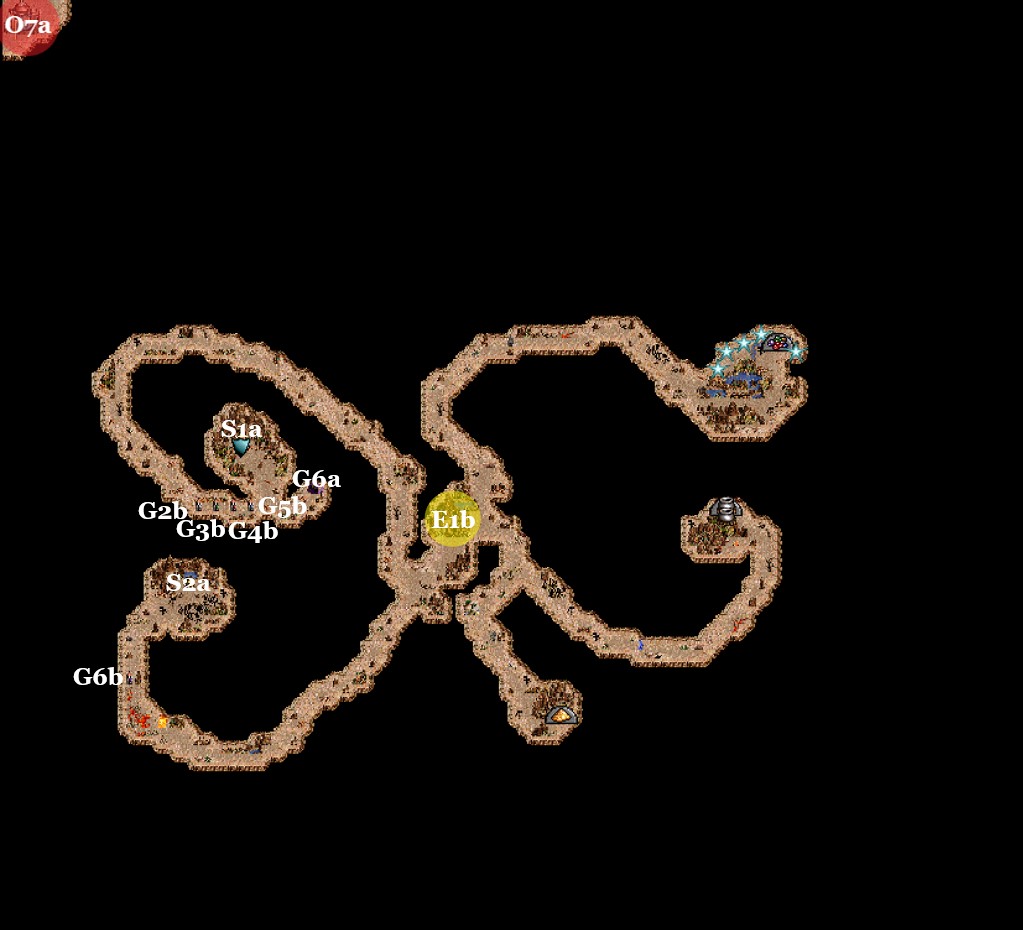 The enemy has six cities to your four, but the starting enemy heroes are weaker than your starting heroes and you start with better armies and better built cities. As in the previous scenario your territory is rich in resources and external dwellings. I recommend an aggressive building program followed by a multi-hero assault on enemy territory in late week 2 or early week 3.

All three of the bonuses are useful, but the Loins are significantly slower than the other options. I recommend the Pit Lords if you plan to farm your Hell Hounds into Demons, or the Upgraded Kennels if you prefer to have Cerberi.

In addition to Xeron, you start with Rashka, Calid, and a random Inferno hero all at level 12. It may be worth restarting until you like your 4th hero and your skills. Rashka usually has Expert Scholar and Wisdom, enabling him to pick up Xeron’s L1-4 spells and transfer them to your other heroes.

All four of your cities have Castle Gates for easy movement of heroes and troops around your area.

Rashka should buy a spellbook, visit Xeron to learn spells, and then visit your other two heroes to distribute them (your 4th hero may also need to purchase a spellbook). This can also be used to rearrange your troops. I recommend building a Marketplace in Scorch (A4) and a Blacksmith in Dagger Peak (A3), and hiring a hero from the Tavern. Have Rashka buy the 2 Efreets in Scorch and visit the other heroes. Xeron should end up with the 2 Efreets, your 4th hero should get the Pit Lords, Demons, Hell Hounds/Cerberi, and Magogs, and Calid should get the Pit Fiends, Gogs, and Imps.

Xeron should gate to Scorch and move along the orange path flagging mines. Your 4th hero should kill the Air Elementals guarding the large pile of resources east of Dagger Peak, then head north to flag mines, take out a Fire Elemental stack guarding some artifacts, and then continue north to flag the Demon Gate, Fire Lake, and Hell Hole. Send your tavern hero to grab the resources and artifacts that the 4th hero opens up, then have them head south towards the unguarded large pile of resources southeast of Dagger Peak.

Calid should move along the yellow path flagging mines. Have him focus on the mines and ignore everything else, and plan to hire another hero from the Tavern to follow behind picking up resources and flagging the Windmill and the various dwellings.

After distributing troops, Rashka should grab the treasure chest near Vandal Hall (A2) and then plan to buy the Devil in Scorch. This purchase may need to wait until day 2. Once he has the Devil, send him back to Vandal Hall and flag the ore pit and sawmill on the red path and grab the nearby wood piles.

If Xeron has Dimension Door or Fly, consider bypassing the big Psychic Elemental stack southwest of Azrael Field and flagging the Forsaken Palace with the help of some spells to take out the Devils. Otherwise, he and Rashka can flag the mines and dwellings between Dagger Peak and Scorch.

To bolster your army you want Citadels in Vandal Hall and Scorch and Fire Lakes in Vandal Hall and Dagger Peak by the end of the week. If possible, also build a Citadel in Dagger Peak and a Castle in Scorch. When you have enough wood get a Marketplace in Vandal Hall, and consider a Kennels in Scorch. Extra gold can be invested into Hell Holes and Cages. When planning, know that you will lose 4 wood, 4 ore, 2 of each of the rare resources, and 2000 gold at the start of day 6.

Plan to upgrade the Fire Lake and Hell Hole in Vandal Hall. Buy all the Efreets and upgrade them to Efreet Sultans and buy the Devil(s) in Scorch. Pool your armies and artifacts to take out the Psychic Elementals and flag the Forsaken Palace if needed, then prepare to invade enemy territory.

Give Xeron the Devils and Efreet Sultans and send him along the dark blue path. Try to scout to see if the Equestrian Gloves are still available on the southern branch—they’re well worth the slight detour if the AI hasn’t found them yet.

Pick another hero to take the rest of your troops plus whatever reinforcements you can afford along the purple path - O6a starts with a Magic University so this hero will have an easy chance to pick up whatever magic skills you want. O4a and O5a start with L3 Mage Guilds, making them good candidates to search for key level 4 spells.

Once you’ve bought your troops, build priorities are a Fire Lake in Azrael Field and Citadels wherever needed. Try to build a Forsaken Palace in Vandal Hall, and build Castles in Scorch and Vandal Hall. In Conflux towns I recommend only building up the mage guilds, with the exception of O2a which is worth full development since it’s the only town that can build Firebirds.

Week Three and Beyond

Your first two invading armies should be capable of sweeping away any resistance the AI can muster in the first month without reinforcements, so plan to have one of your other high level heroes pick up the third week’s Efreets and Devils and invade along the light blue path. You may need to send a fourth hero with your new Gogs/Pit Lords/Demons to help hold the central territory while your first two heroes push westward. After you take over the six enemy towns, focus on exposing the map and hunting down any stray heroes. You can’t defeat the enemy thanks to the inaccessible O7a, but that city only exists to ensure the guard on S1a sticks around if you take over the other towns. Once the overworld is clear of enemy presence you can relax and take the rest of the map at your leisure.

G1a is needed to access the underground gate. G2a, G3a, G4a, and G5a are all needed to access S1a and G6a. The enemy hero guarding S1a has a very powerful army including 25 Phoenixes, 35 Magic Elementals, and hundreds of lower level troops. S1a will ask for 30000 gold in return for a Sphere of Permanence. Take this along with the Sword of Hellfire, Breastplate of Brimstone, and Shield of the Damned past O6b to S2a to build Armageddon’s Blade and win the map.

It is possible to sideline Xeron if you want to avoid building him up.  Have Rashka take over Xeron’s role (and his artifacts!), a tavern hero take on Rashka’s role, and use Xeron as one of your side heroes picking up resources. It’s also possible to win with an immediate breakthrough of the mid or south garrisons (the north garrison has a much stronger guard) and invasion of enemy territory, but the lack of strong following heroes can make it difficult to contain the enemy heroes.