Armageddon's Blade → Shadows of the Forest

Defeat all your enemies to win the scenario. However, if Gelu is defeated in combat the scenario is lost.  Gelu will be allowed to advance to 12th level and carry over his experience, skills, and spells into his next scenario. 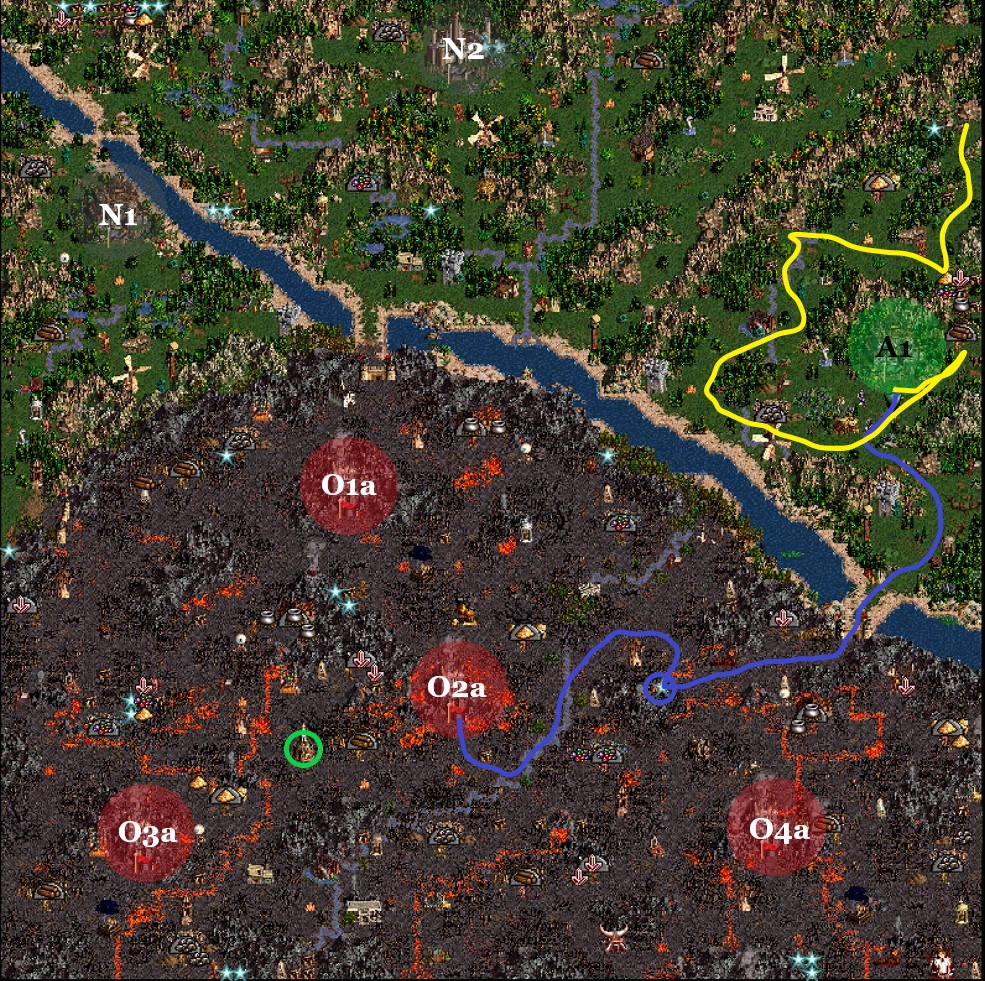 I recommend you take the 10 Sharpshooters.  The other options are weaker until you have enough gold for Gelu to convert them into Sharpshooters (5000 for the Marksmen, 2625 for the Grand Elves), and it is difficult to accumulate that gold without compromise in other areas.  Gold is such a scarce resource on this map that I recommend taking gold from all Treasure Chests.

Try to get Gelu to expert Wisdom since six of the seven towns on this map can build a level 5 Mage Guild.  Gelu can only learn one new skill besides Wisdom if you want to ensure this happens by level 12.

The map has numerous Scholars.  Most of these give extra stats so you should try to visit them with Gelu.  The one north of A1 teaches Luck and the one northwest of O3a teaches Pathfinding.  I recommend avoiding these Scholars with Gelu; neither skill is very valuable in this campaign.

You start with one town to the enemy’s four, and your town is more restricted in its max development than any of the enemy towns.  Enemy territory also has more mines, better artifacts, and plenty of loose resources.  Therefore you must make a timely push into enemy territory or you will be overwhelmed by the enemy’s superior production.

To your advantage, your starting town is nicely built up and you have access to a powerful starting army.  Send Gelu directly to town, picking up the 30 Elves.  Move the 60 Elves off of Gelu into the town garrison so you can upgrade them to Grand Elves, buy a Spellbook for Gelu, and recruit another hero.  Upgrade that hero’s troops and have them pick up the Archers, Marksmen, Sharpshooters, and Grand Elves to save Gelu’s movement.

I recommend splitting these troops as follows:  Gelu keeps 20 Silver Pegasi, 10 Sharpshooters, and 60 Grand Elves, and is given the 30 Archers and 20 Sharpshooters picked up on the map.  Gelu should upgrade the 30 Archers to Sharpshooters for 9000 gold.  The 2nd hero keeps 10 Grand Elves, 20 Marksmen, and whatever troops they started with.  This gives Gelu an army strong enough to defeat almost anything on the map with minimal losses (split the Grand Elf and Marksmen stacks for extra flexibility), and the 2nd hero an army strong enough to clear the starting area.

Send Gelu down the blue path through the garrison to pick up the Boots of Speed (blue circle) while the 2nd hero uses the yellow path to flag the Sawmill and Ore Pit.  Gelu’s next objective is to capture O2a while the 2nd hero breaks into the area north of A1.  Hire a 3rd hero in O2a, leave their troops in the city garrison for a little protection, and send them to the nearby Cartographer (green circle) to expose the map.

Building priorities are to get a City Hall in A1 and to build a Citadel, Demon Gate, and Hell Hole or Fire Lake in O2a.

With full knowledge of enemy hero locations and the movement boost from Boots of Speed, Gelu should be able to capture O1a and O3a while killing off enemy heroes.  Hire some extra heroes to pick up loose resources, flag mines, and defend your towns.  A secondary army assembled from your Inferno towns and/or your initial town can help with cornering any remaining enemy heroes.  Once this is done use the secondary army to trap the enemy in O4a.

With the map under control you are free to level up Gelu, visit places of learning to increase his stats, and build up your mage guilds to teach him powerful spells.  Be sure to build Orders of Fire in all of your Inferno towns for extra Spell Power.  Have secondary heroes visit the Witch’s Huts to see if any of them teach skills you want to learn with Gelu, and consider building a Magic University in N2 to teach Earth, Air, and/or Water Magic to Gelu.  Once you are satisfied with your Gelu, take O4a to win the map.