[HOMM 5] Custom Heroes help
Today, 02:47 by Aethris (4 replies)
in Modcrafting Guild
Thank you, I will ask them.

MAP – H4 WoW: Archmages (Sent for...
16.01, 23:36 by Karmakeld (15 replies)
in Mapmaking Guild
However, if Equilibris increases size of neutral armies by three, it may be even harder to overcome...

The big sites have had their say, and now it is our turn to speak. Just added to our list of game reviews is our in-house review of Might & Magic X: Legacy.

The review is written by Tress, one of our loyal members and a real fan of the Might & Magic series.

Having had to be quite stern in our criticism of the previous instalment of the Heroes series, it is pleasing to see that the results of Limbic's efforts, while it would never produce a AAA title, does indeed seem to be a good step in the right direction. Hopefully this is a step that may lead to more, bigger, games in the future.

With a gap of almost 15 years since the last M&M game being released and the RPG segment of the game industry having evolved to something completely different than what it was during the first period of M&M games, seeing a game of such a genre today is quite uncommon. As someone who grew up with M&M 6-7 and becoming a fan of the whole series, of course any continuation of the series would be welcome, but that will also highten expectations of the game. With the game industry being what it is, it is understandable that such a game would be developed on fumes and would certainly not be on the scale of bestsellers of the latest TES instalments. Fortunately, the game authors managed to create an immersive game, even if it is not reminiscent of the classic M&M 6-7 games that many of us grow up with. In fact, it stands more as a well-polished version of the XEEN series. 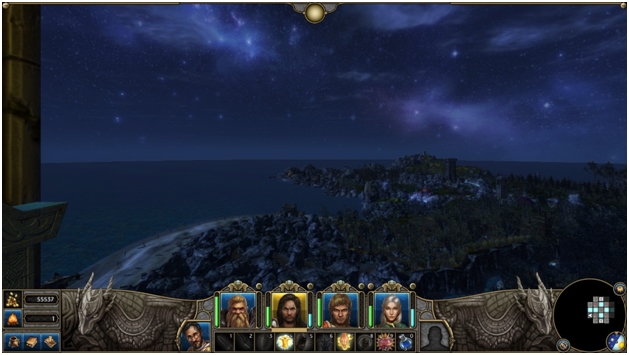 It is possible to see almost the entire world from high vantage points. While that make the game setting smaller to make up for more realistic scale, it does not mean that game world is significantly smaller than its predecessors.

As most RPGs (the M&M series certainly not being an exception), the first thing that we always encounter in the game is its character creation, and it would not be an overstatement to say that the character creation part of this game is the best in the series. Not only does it have the largest class selection to date, but it also allows for the biggest variety of various classes while not making every class similar. Of course it does seem to have its flaws: that some classes seem very important and less replaceable. There was no feeling that I would have an extremely flawed team if I skipped some class, with the only exception being the human caster – Freemage.

Without delving into too much detail, the game features selections from magic, might or hybrid archetypes, with each race of four races having wildly different version of a class. Aside of the aforementioned freemage (which is the only class that is able to learn dark magic, which in turn is the only school for revealing secret passages in dungeons without resorting to using hirelings or some other late game methods like spells which I currently did not seem to have as viable alternatives) no class seems to have distinct advantage over others.

While character development have its roots in classic M&M games, it has a few fundamental differences, one of them being that character stats are dynamic and points of them are spendable on level-ups. This change from my view is somewhat unnecessary, and while it provides with an option to make a more shaped character, it also makes it possible to break a team member since you might not realize that the HP or mana pool is too small until it is too late, while being too excited about raising primary parameters for attacking. And while it may be exciting to have the option to create characters in a way you want, it may become frustrating even on the lowest difficulty, as there is no way to know beforehand which stats are the baseline for your next encounter. 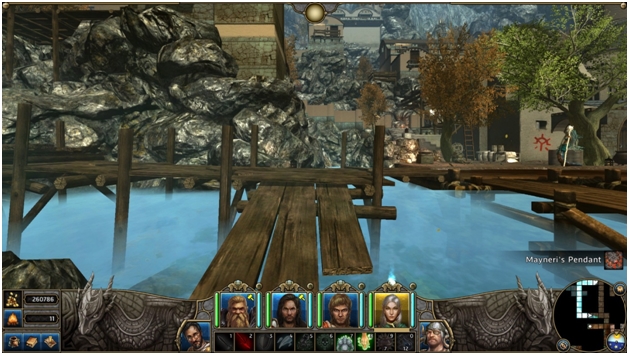 The game features only four towns, but each have its distinct setting and feel, starting from the Imperial city to a pirate cove.

With this game being a niche product and able to take liberties that most modern games do not, true to its name and retro style, it tends to "not hold your hand". This is true in almost every aspect of the game be it combat, character development or exploring. With combat oftentimes being challenging even on 'adventurer' difficulty, it is the first game of the M&M series that has forced me to stop and look into the bestiary to check for the exact monster stats in order to win encounters. While most modern games (like Skyrim or Fallout 3/NV) provide you with a compass to the exact location of objectives, M&M 10 forces exploration, often providing vague or almost no clues.

While M&M 6 sometimes gave quests which forced such exploration, "Legacy" sometimes acts even to a point I found somewhat cruel. For example, one of the quests wants you to find 3 pieces of artifacts without a single clue where to start looking. While by that time I had found pieces one and three, with some meta thinking I presumed that it should be located somewhere in between, which resulted in approximately one evening of scouring the first part the game. After eventually completing the quest, I could not shake the feeling that I was deliberately being trolled by the developers. Even though most puzzles that are required can be solved with some thought, some seemed to be very hard and admittedly at least for one I had to look up for solution in order to progress.

Of course I couldn't say that this experience was negative or there was no rush in searching; this is oftentimes absent in modern games, and perhaps this is part of a gameplay that the authors want to encourage. Still, the game would benefit from a much more effective journal and note system, as most notes you will need to write down. Skill trainers are the worst offenders, especially for the fact that next tier trainer location is mentioned only once after learning the rank. So if you learn a skill level for character and forget to read where the next one is during that one chance, there is no way of knowing aside of scouring the world or resorting to various external materials.

When the game was first announced, many (including me) were disappointed that gameplay was announced to have square based mechanics, typical to retro games like World of Xeen, Wizardry, or Eye of the beholder. While such constraints give a much more hampered feeling of exploring the world, it surprisingly alters the combat mechanism in a more positive way, making it a very tactical experience, albeit not without flaws. As mentioned, combat can be extremely challenging, although it oftentimes is achieved by making ambush-like encounters, which sometimes feel as a cheap method of making an encounter harder.

Unlike older games, where monsters sometimes have high resistance or immunity to some of the schools of spells, in "Legacy" this is extremely common, often leaving monsters with a chink of single or two schools in its resistance armors rather than an exception of a school it can resist. This prompts attacking several targets at once based on their individual resistances. This is also one of the moments that can make the game somewhat artificially harder and encourages planning the party setup beforehand, like my choice to skip fire magic made my encounters with nagas somewhat painful. Watching retrospectively on encounters passed, with the correct spell choice and setup they would be much easier.

Paradoxically, fighting multiple enemies at once is easier than a single enemy, due to some AoE spells whose potency raises several fold the more enemies we have. This aspect especially affects the endgame, as the monster difficulty seems to cap at the start the of third act, making act 4 encounters somewhat easy, albeit with very large numbers of enemies which did not provide as much of a challenge as the midgame, making the endgame of act 4 a somewhat dull meat grinder in an otherwise interesting game. 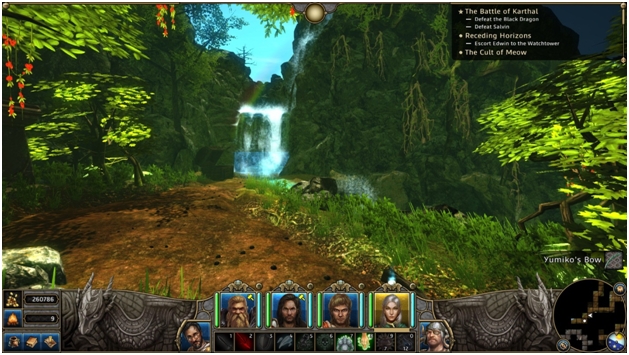 Even though the game does not feature the variety of landscapes of its predecessors, like volcanic lands and deserts, it still manages to provide with various and exotic settings like jungle.

Of course, a grid based world makes exploring less interesting, and unlike the XEEN series, the world is much more constricted. If in classic M&M games with all skills learned we could walk over most obstacles, then the overland layout of "Legacy" is much more reminiscent of games like Eye of the Beholder, where areas (especially forests, mountains etc.), are made of corridors. Combining that with fighting mechanics, it means that exploring areas out of your league is not possible since there is no alternative to dealing with monsters short of killing them. They won't stop until defeated and even outmaneuvering them is rarely an option since even if you manage to do so, you can't interact with the world until combat ends.

There are moments during act 3 when you can really feel freedom of the game, and can explore the world, which admittedly is encouraged due to some quest items hidden around. During this, the game truly felt at its peak, which really compensated for a somewhat linear start and somewhat dull endgame.

An extremely pleasing aspect of game is its abundance of small details, starting from small things like the fact that most GM skill trainers have some extra idea behind them, on to the fact that the game features huge amounts of lore-like material, or simple nods which oftentimes connects and refers to classic M&M games. And while this gives extra immersion in the world, aspects like the lack of descriptions for non-artifact items, or the lack of memorable music that would give strong associations with explored areas, somewhat diminishes it.

While not a too important aspect, the game's graphics are very pleasing to eye, and most who have played Heroes VI would probably have gotten an impression of it already due to the same engine and many of the assets being used.

There again, of course, there are flaws of various severity: the inability to change texture quality during the game; some resolution settings are absent (which for me is not a huge deal, but if we remember the controversy around Bioshock, it seems to bother rather large percent of people); the fact that the game seems to be poorly optimized in some select parts of the world, producing extremely poor frame rate performance. Nevertheless, such problems are few and far between, while the fantasy world provides players with immersive images. 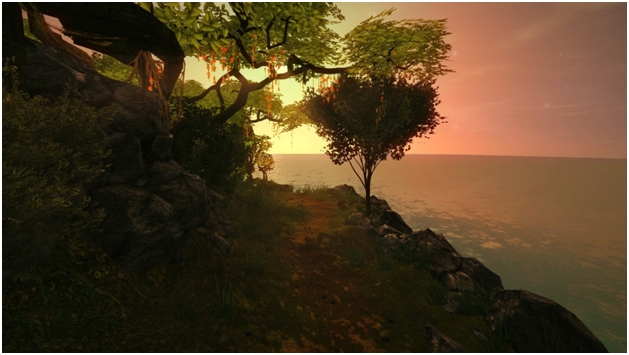 The feel of seeing the day end and start is not lost in "Legacy".

Graphics: While not the state-of-the-art graphics we expect from many modern games, it is style and art which truly carry the game and gives immersion.
7,5/10

Sound/Music: Unfortunately, the game does not provide as immersive music as its predecessors, with the only memorable track being the combat music during boss fights, which is borrowed from M&M:DM.
6,5/10

Gameplay: As the most important part of game, the gameplay aspect delivers, making it a true classic RPG experience. And while the endgame is a bit long, with somewhat disappointing plot twists (reminding me of M&M 9 in both), it truly is a good RPG experience for anyone who wants to play a modernized classic RPG. Well worth its money.
Act 1-3: 8/10
Act 4: 6,5/10