Underrated game
2 minutes ago by Belcanzor (5 replies)
in King's Bounty
I understand now.
Well , I cant judge, sometimes I go out for 3 or 4 years and come back.
After play...

CH →
Walkthroughs →
Elixir of Life → Valley of the Dragonlords
﻿

Elixir of Life → Valley of the Dragonlords

This valley is the land of the Dragon Lords. They must be defeated and the Ring of Life located to win the scenario. Gelu is limited to level 20 but will carry his experience, skills, and spells on to the next scenario.

Starting Bonus: 1 Green Dragon or Boots of Speed or 3000 Gold. 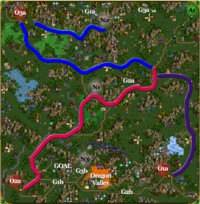 This is where building up two other heroes through the first two maps will really help you out. Unfortunately, they won't follow you to the next map so you won't have to spend time with increasing their level or taking them to places of learning. Take the Boots of Speed and be sure to have Gelu put on the Ring of Vitality that you got on the previous map.

As usual, give Gelu all of the Wood Elves and turn them into Sharpshooters. I had Gelu follow the blue path to defeat O3a and take over N2 to secure the northwest quadrant. I gave Jenova who was essentially a might hero (she only had Expert Water Magic) all of the troops except the Green Dragon and had her follow the purple path to take out O1a. Elleshar, my magic hero, received the Green Dragon and followed the pink path to overtake N1 to make use of its Gold Dragon cave. By the end of the first week I had overtaken both O1a, O3a, and N1.

After restarting this map a few times, I have come to realize there is a factor of luck in which town will hire a Gold Dragon. If it's O3a then I would have no problem since Gelu had Implosion and could easily take out a Gold Dragon by himself. If it was O1a then I was at a disadvantage since Jenova didn't have the troops at such an early stage to handle a Gold Dragon. Sometimes both towns will hire Gold Dragons! I recommend that you place a higher priority on O3a since the enemy will often try to get N2 and you don't want them to have that advantage.

Elleshar took over N1 and upgraded his Green Dragon and bought an extra Gold Dragon and continued on the pink path to O2a. I divided his two Gold Dragons into stacks of one and used Implosion to take out the enemy Gold Dragon on the first around. I used magic extensively to win this battle since I would rather not attack with the Gold Dragons if they'd get damaged badly from the retaliation. Hunt down any wandering enemy heroes (View Air works well for this) and you can eliminate the Orange enemy either near the end of the second week or near the beginning of the third week if you move fast and have good secondary heroes.

After such an exciting start, the rest of the map is rather anticlimactic. Build Castles and City Halls in every town that don't have them and be sure to build a Capitol in one of your towns. The only troops you want to have are Wood Elves (to turn into Sharpshooters) and Gold Dragons. War Unicorns are nice but aren't essential. As you're building up your towns, flag mines and take Gelu to all places of learning and make sure he's level 20 before the end of the map. When you're finished, load Gelu with Sharpshooters and Gold Dragons and head up to the garrison west of N2.

You have a rather easy battle in the garrison but it was worth it as you get access to a Library of Enlightenment (+2 to all stats) and a School of Learning (for the possibility of learning a good skill) and G1a that opens up a path to the Dragon Valley. Have either Gelu or a secondary hero take out the Unicorns that are guarding G3a which west of A1 and flag it. Then have Gelu travel to G1b which is east of O2 and enter to see dragons of nearly every color. This is a good spot for Gelu to make it to level 20 by fighting the dragons and the artifacts aren't too shabby either. N3 is guarded by five dragons of every type but it is not essential to attack it as the only dragons you can hire from it are Gold. Once you're done playing around, open up G3b which is southwest of N3 and visit the Quest Tower that will only admit Gelu. Beyond that is the Ring of Life and victory.

Underrated game
2 minutes ago by Belcanzor (5 replies)
in King's Bounty
I understand now.
Well , I cant judge, sometimes I go out for 3 or 4 years and come back.
After play...