Stop a group of rogue AvLee lords from selling the Ring of Vitality to a Death Knight lord in Deyja to win the scenario. However, if Gelu is defeated in combat, the scenario is lost. Gelu is limited to level 15 but will carry his experience, skills, and spells on to the next scenario. 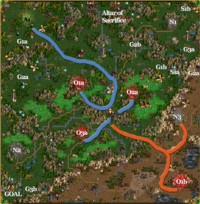 If you don't get aggressive right from the start you are going to lose. This is because you start out with one town while the Tan enemy gets three (O1a, O2a, O3a) and the Red enemy gets one (O1b) with a netural town (N3) within a day's walking distance. That's why you should take the Equestrian Gloves as your bonus because Gelu will have to get to the enemy before they have the time to build up.

Give all of the Wood Elves to Gelu from the two heroes who traveled with you from the first map as well as from your allied town and turn them into Sharpshooters. Hoof it on the teal path and make it your first priority to take out the Tan enemy. Put the remaining troops on a second hero and have them follow Gelu to help take out scouts so Gelu can focus on the harder heroes. Use the third hero to flag mines.

Remember to hire more Wood Elves as you conquer each of the Tan towns and turn them into Sharpshooters. Give the other available troops to the second hero who should be aiding you in eliminating the Tan hero. Ensure that none of the towns are retaken by having Gelu watch over O1a and O3a since, with the Equestrian Gloves, he can easily reach either towns. Put the second hero near O2a. If you work fast the Tan enemy could be eliminated within the first week, especially if Gelu or the second hero has good magic abilities.

Be sure to build Citadels in each of the formerly Tan towns to give you extra Wood Elves and hence Sharpshooters the following week.

Now that the Tan enemy is defeated, your next goal is to eliminate the Red enemy. Get additional Wood Elves from O1a, O2a, and O3a and head on the orange path where you will find the Red enemy. One tactic is to go north because you will probably find a Red hero up there who is looking to take over N3. Sharpshooters plus Expert Slow plus lack of enemy shooters will ensure that you win every battle. Then follow the orange path southeast and take out the other Red town at O1b and defeat the only enemy remaining. Now all you need to do is visit Guard Tents in order to get the Ring of Vitality.

Build City Halls in your towns for gold since Sharpshooters are expensive. Also build Castles in A1, O1a, O2a, and O3a so you can hire as many Wood Elves as possible. Have Gelu and the two heroes travel around and visit places of learning, flag mines and creature generators, pick up artifacts, and generally explore. I also built the Mage Towers in all of the towns for the most chances at getting important spells such as Resurrection, Town Portal, and Chain Lightning.

There is a neutral town southwest of O3 that Gelu could take quite easily and it's another source of Wood Elves although it's not really necessary. It's nice for the extra Mage Tower however.

When you are ready to move on to the next map, you have many Guard Tents to visit. First visit G1a which is south of A1 and then visit G2a which is either directly west of O1a or north of N3 (there are two light blue tents). Then visit G1b and the Quest Tower beyond (which only lets Gelu through) to pick up the Badge of Courage. Then go northwest to go through G2b. You can conquer the neutral town at N1 if you wish and be sure to visit the colleseum as well as G3a. There is an Altar of Sacrifice west of N1 so you can sacrifice usless artifacts for experience. This is very helpful for your two secondary heroes considering Gelu will be engaging in most of the battles. You will be finding very many artifacts so it's possible to make sure all three heroes to level 15. Go to S1b who will take the Badge of Courage and give you Angel Wings as a reward. Have Gelu travel to G3b which is in the southwest corner of the map, travel through it and to the Goal where you will give the Seer your Angel Wings for the Ring of Vitality. This task accomplished will win the map.