Might and Magic 6, 7, 8 merge based...
4 minutes ago by GrayFace (5522 replies)
in Might and Magic
Currently, in MMMerge, swamp trees (as seen in Mire of the Damned) look like disgusting green glitchy...

GrayFace MM6 Patch v2.4 [Sep 17, 2019]
59 minutes ago by raekuul (516 replies)
in Might and Magic
With one exception, the Doors in the Superior Temple of Baa that require perception do not properly...

Your goal is to defeat all of the enemies without having Gelu being defeated in battle. Your heroes are limited to level 10, but Gelu and two other heroes will move on to the next map.

Your choices for starting bonuses are the Speculum, 15 Grand Elves, or 10 Sharpshooters. 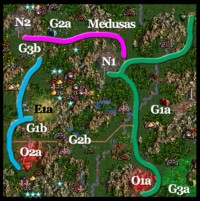 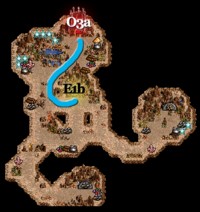 Definitely take the 15 Grand Elves as your bonus as Gelu can turn them into Sharpshooters himself. You do that by putting the elves in Gelu's army, double-click on them, and press the upgrade button. It does cost some gold but it's definitely worth it.

In this map you should get Earth Magic at expert level because Mass Slow will be the key to your success on this and the other maps. Expert Water Magic is also good because Expert Forgetfulness makes enemy archers not fire, and they are a big threat to your Sharpshooters with their low health. Water Magic is also good for Bless which is my most favorite skill of all time. Armorer, Ballista, and Resistance are also good skills with Wisdom being optional if you want to use skills like Town Portal or other high-level Earth Magic. However, it's not necessary as your Sharpshooters are strong enough on their own.

The two wandering stacks by Gelu will join for free so take them and follow the green path to conquer the N1 town. It's protected by some skeletons but your sharpshooters will handle them very easily. Dump all the troops except for Elves to get as many Sharpshooters as possible. Leave N1 and continue south along the green path to O1a and take over that town. The town will not be built up and the enemy hero very weak so it will be a piece of cake.

Now you are relatively safe since the enemy is trapped in the south by a Guard Tower with the Guard Tent on your side and by a pack of Medusas in the north. So I recommend hanging around the area to flag minds, get resources, and build a castle in N1 so you can get as many Elves and thus Sharpshooters as possible. I liked to seperate my Sharpshooters to two or more stacks so they do as much damage per round as possible.

After about two or three weeks of collecting Sharpshooters, head on the pink path and face the Medusas. You should do just fine and lose very few Sharpshooters. Forgetfulness will help you immensely here, even if not at expert level. Go a bit west along the pink path and take over the second netural town, N2. If you work fast enough this town will not have been taken over by the Red enemy and it will be an easy battle.

Now get as many elves as possible and turn them into Sharpshooters and head south on the teal path. Your goal is the second enemy town which should also be a piece of cake since few enemies can withstand the might of Sharpshooters plus Slow. Now you are totally protected from the enemy since there is a Guard Tower in front of the exit with the Guard Tent right by O1a. Since the enemy just has one town and you have four, you can easily get many more troops than the enemy does.

Now you can spend some time having Gelu visit all of places of learning to improve his statistics as well as having two other heroes leveling up as much as possible. Having two additional heroes in the next map will really help you out at the beginning. Remember to build a Hall of Valhalla in the one Stronghold town to give your heroes +1 to Attack.

When you're ready to beat the level, have one of the heroes visit G1a which is a bit south and east of N1 so you can pass through the Guard Tower at G1b. There are no places of learning down here, so combine the troops on one hero and attack O3a. One idea is to give a secondary hero the troops so they can get additional experience since Gelu has most likely reached the maximum level already. O3a should not have many troops since it will have a lack of resources and gold so the final battle shouldn't be tough at all. With the defeat of O3a, the map will be completed.