CH →
Walkthroughs →
Elixir of Life → Thief in the Night
﻿

Elixir of Life → Thief in the Night

Steal the Vial of Lifeblood from the Vampire Lord Vokial to create the Elixir of Life and win the campaign. However, if Gelu is defeated in combat, the scenario is lost. Gelu is limited to level 25 but will carry his experience, skills, and spells on to the next campaign. 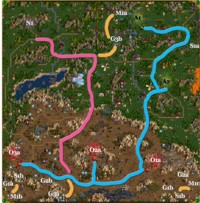 The starting bonuses are 3000 Gold or 20 Rogues or 10 Sharpshooters.

Definitely take the 10 Sharpshooters because you will defeat the enemy with them. Necromancers have a weakness in that their low-level troops are weak and slow and if you attack them quickly, they won't have any means of defending themselves. Unfortunately, the two heroes that you have been building up won't be with you so you won't have their troops to work with. This is partially why you have to work quickly.

I have verified for myself that Gelu won't transfer over to the next campaign even though you are told that he will be. Therefore, it's not necessary to visit any places of learning or go out of your way to gain levels.

Now go west along the teal path and take over O2a. You might meet some enemy heroes along the way and I suggest you fight them since it shouldn't be too tough to beat them. O2a will be a tough battle since Vokial is a tough hero with many troops but with Gelu's Sharpshooters and magic, you will still emerge victorious. Capturing O2a is important because it is nearly built-up and the longer you leave it alone, the bigger danger Vokial will be. Hire a hero and leave it in O2a as you continue along the teal path west.

O3a is the final enemy town and conquering it and any enemy heroes you come across will be a piece of cake. The biggest threat you have is their Magic Arrow but, with their limited mana, that shouldn't be very much of a bother. Build a Citadel in O3a and hire a hero to watch over it as you track down any remaining enemy heroes. Once that's done, the Red enemy will be eliminated and you will have the map to yourself.

Your goal is to bring two artifacts from the southeast and southwest corners of the map to a Seer that is east of A1. Unfortunately, the artifacts are guarded by Dragons so it's a good idea to build up your army before taking them on. So take Gelu along the pink path and take the neutral town at N1 which will provide gold and Sharpshooters.

My proposed building order is Homestead, Castle, City Hall in that order. This is because Sharpshooters will make up the majority of your troops and upgrading them from Wood Elves take a lot of gold. After this is done, I'd get as many War Unicorns and Gold Dragons as possible because they are strong and take up two hexes so they are good at protecting the Sharpshooters from damage.

Once you have a big enough army, visit G3a which is southwest of O2 along the orange path. Then go up north to G3b, pick up more Sharpshooters and the other goodies here, then travel through the two-way Mirror at M1a. You will be taken to either M1b or M1c. To get to the other, just press the space bar without leaving the Mirror.

Now all you need to do is defeat the dragons that are guarding the artifacts that you need to win this level. Once defeating one set of dragons, simply use the Mirror to get to the other corner and get the other artifact. If you have Town Portal than you can quickly travel to A1 and then east to S1a. Otherwise, use the mirror to get to M1a and travel south and east. Once you trade the artifacts for the Vial of Lifeblood, you will have won this map.