Might & Magic: Heroes VI → Dungeon → The Call of Malassa

This map is hectic, but not near the pain map 4 is. You are pressed for time in the first couple of weeks, and then have to protect your towns. Since there are multiple ways your enemy can reach your towns, this becomes quite the challenge. The good news is, the enemy only out numbers you two towns to 1, and your enemy can not get dragons. There is a pesky inferno town and heroes to deal with, but you should be able to negate them early, and make the town numbers a little more even to boot. Dynasty Traits. Since we need to get as far as we can as fast as we can, I chose the logistics dynasty trait and noble steed. Noble steed only works the first week, but by that time it should become redundant. I also went with first hero free, +3 core creatures/week, and +10% to all sources of gold. The 10% doesn’t help much in the beginning, but once you have a capital in your main town, it really shines. 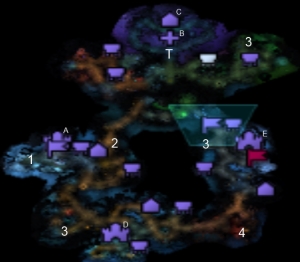 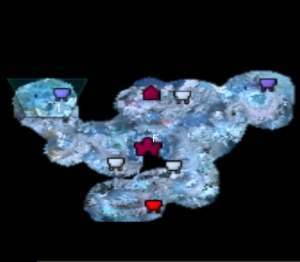 You start out with Town A, and at 1 nearby you get a quest to capture the sawmill at 1 above ground, and defeat the creatures there. Since we really need a sawmill anyhow, it is a good idea to flag it and the ore mine near your starting town. The way to Town D is blocked by some doors, so while you can clear out that area, and claim a gold mine, keep in mind that the creatures blocking your way to the town and the gold mine are a bit tougher than what you have been facing.
At 2 you will be met by Menan, and he tasks you with reaching the dragons at C before anybody else does. Since we plan on doing that anyhow, go for it. You will face three trials. They are not that difficult, and they give you good experience points, so go for it. You will also be asked to decide if you want to back Nightshard (Tears) or Soulscar (Blood)… the following walkthrough is backing the tear candidate. Before you panic, it is a ‘If you are defeated’ question… you are not actually backing either candidate.

When you hit T, you will have to fight some lurkers with a stack of Assassins and a stack of Shades. The quest says you have to kill them before they spot you, but really all you have to do is get past the doors before your stacks become visible... and then kill them. There are no worries there.

Claim Fort B, port in any reinforcements, and rush toward C. Here you will have to fight some Black Dragons, so do that and claim your prize. Not only do you get a few Black Dragons, you get to build the dragon buildings in your towns. You will find yourself back at your starting town, and get a cutscene where 3 doors open.
Start heading south. You will get a quest to train with three Faceless. The Faceless are marked at 3. You will also get a quest to help one of your heroes to get to 4. Claim Inferno Town D and convert it asap. Just a note: often, Inferno will have a hero wandering around, you will have to stop them before you get the quest to purge the Inferno complete.
Keep an eye out for attackers headed toward your towns, but head toward Town E. Might as well have that hero stop at 4 to claim some extra troops, but keep in mind it is a trap... so have your main hero nearby to kill the Inferno troops that appear from nowhere. All that is really left is F, but there is plenty of experience and things to clear out before you go. 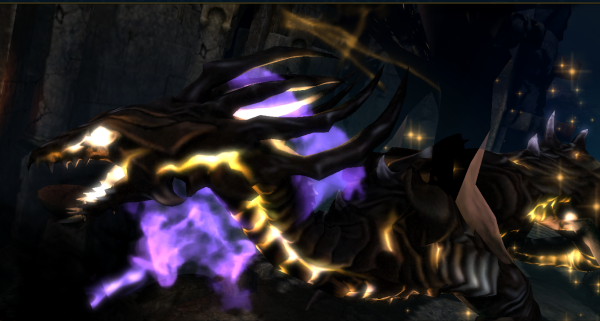