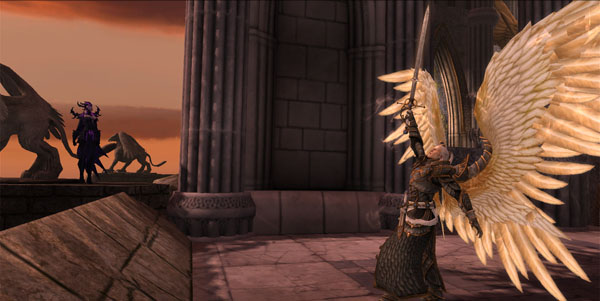 Warning: Wearing over-sized wings could result in unexpected loss of balance and back muscle strain.
INTRODUCTION

While Epilogue 1 happens on the sky, Epilogue 2 takes place deep in the abyss. The last mission of Heroes6 is actually beautifully designed and well balanced, featuring a spectacular finale and review of the regular campaigns: legions of neutral creatures, decent mini-boss fights with Sanctuary, Stronghold, Haven, and Necropolis (no Inferno - probably because they have been defeated in the regular campaign), and a final boss that surpasses anything else big you have brought down in the game. 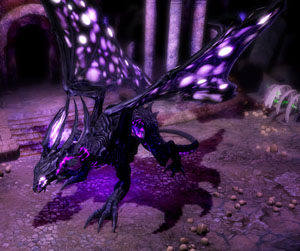 All you need to do is to pick your best Blood character and enjoy the thrill! This walkthrough features Anton (Blood + Might) because I have never seen Imperial Griffins' battle dive (it was bugged before v1.2). Please feel free to try other characters.

This mission is very linear. You have to defeat one faction after another; they don't come together. So this mission is easier than it seems - you always focus on one enemy at a time. You gain powers from taking each faction's well-developed towns, which are quite lightly defended like in mission 1. There will be aggressive heroes hunting you down as soon as you enter, but they are just as week as those back in mission 1.

At the end of each faction's territory, there will be a mini-boss fight that unlocks the next area. While the mini-bosses often carry armies that are above Moderate threat (up to Deadly), none of them should be overwhelmingly difficult as long as you keep a steady pace and waiting for the next week's growth should you find a battle too difficult... to win without any loss. 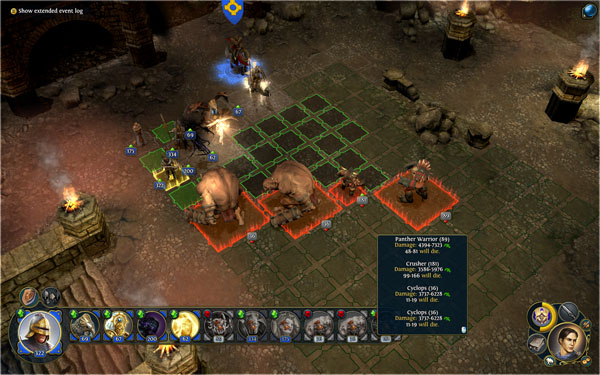 A Marksman's dream: all enemies voluntarily line up for a perfect shot during high morale + luck!
Guess what, you will be able to collect Moon Fragments again! However, there is NO Tear of Asha in this mission (feature or bug?). All you get for collecting four fragment is the completed moon disc that enables you summon 3 pheonixes, which is completely useless by the time you get it (unless you use Sandor, you should start a mission with one anyway). The location of the fragments will be omitted from the map.

But even when there is no Tear of Asha, there will be enough towns to give you a gigantic army to fight the final boss. If you don't upgrade all creature buildings, you should have enough resources and gold to hire all creatures. 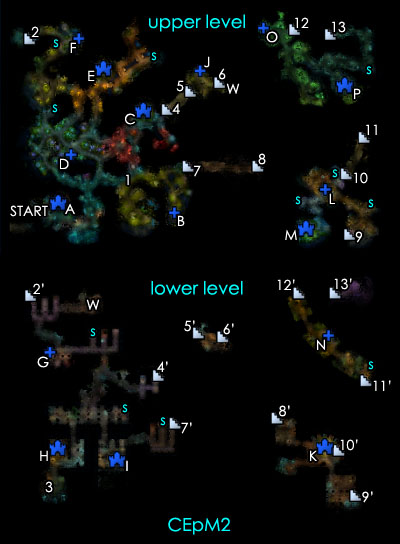 You start the mission at the lower left corner (start). Since this is the abyss, you are actually on the upper level. Your main character stands beside Town A, while your side kick hero should spawns beside Fort B. Take out all neutral stacks around Town A, collect resources, and flag the resource buildings on your way out. You can clear the neutrals at (1) so your side kick hero can contribute her/his army to your main hero. South of (1) you can flag a crystal mine. 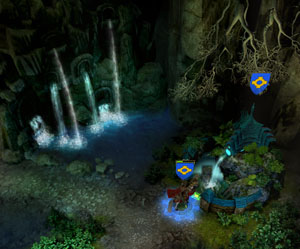 Your town is very underdeveloped, but the Sanctuary AI's towns are very well built. To harvest AI's towns as soon as possible, you can use your income and loots to hire generic heroes, and combine their army (shooters preferred) with your main hero. Your first enemy is Sanctuary, who owns a few towns and forts to your north.

If you have a good magic hero, it is possible to venture into the Sanctuary territory in Week 2, defeat a mobile Sanctuary hero, and take Town C. Otherwise, you can clear your own areas first, wait for more creatures, take Fort D first, then go east to grab Town C. From here it will be very straight forward - take Town E to the north and Fort F further north. The first mini-boss of the mission, a familiar face, is located in front of the stairs at (2). He does not move, and he will wait for you to outgrow him.

Note: Your Realm-ability expert secondary heroes can convert towns at discounted resource and gold, too. Besides, converting forts (v1.2) has now become a decent investment - you start breaking even after 15 days or so even (slightly better than buying gold chests artifacts).

After taking all towns and forts in the Sanctuary territory, take some time to clear every neutral creatures on the reachable upper level. Don't challenge the mini-boss until you have run out of things to do. Even if you can marginally beat this boss, in the next area an even more powerful hostile hero will come to you shortly. So take some time to load up your character with battle and weekly bonuses. Handle the mini-boss and use the stairs (2-2'). 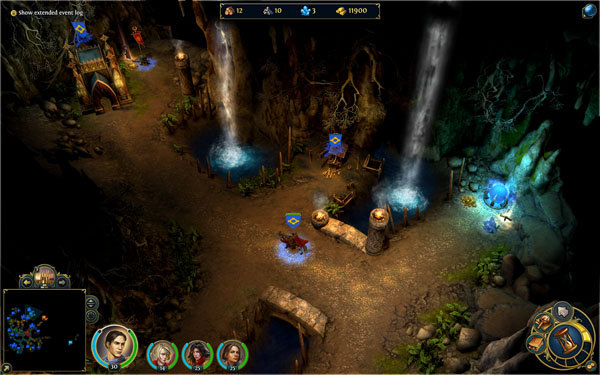 Your next opponent is Stronghold on the lower level. In my game, there was a hostile hero coming at me on the second day from the south. The Stronghold territory also consists of a few towns and forts - Fort G, Town H, Town I, and the mini-boss' Fort J. Grab Fort G as soon as possible to give yourself a basic town portal destination, and flag the Warpath Lodge (W) in the dead-end area to the northeast.

Your next goal is to take Stronghold's Town H to the south. Feel free to skip encounters on the side of the road - you will have the time to come back for them later. By the time you reach Town H, it should have been fully built. Interestingly, I did not have enough resources to convert Town H before a new week arrived, and I received a scripted 7-stack Stronghold army meant for the AI! 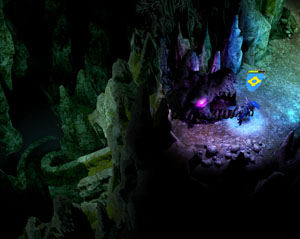 The nice things about Stronghold towns is that you can buy artifacts before converting them. (If you are Haven or Sanctuary then you can build the Advanced Market anyway.) Definitely look for the Emerald Yumi Bow, the Ring of Haste, the +8 Leaderhip and Destiny accessories, and any part you lacked. Another interesting find is that the Warpath Lodge in stronghold towns are independent of the Warpath Lodge you flag on the adventure map. In my game, at one point I gained +8 movement points per battle! Anton had some very, very long days.

Local attraction: there is a ruins south of Town H at (3). It gave me 200 Dark Elementals at (4)! They are very helpful before I eventually replaced them with Celestials close to the end. With the reinforcement, go after Town I and disable the Stronghold faction for good. Now you have all the time to come back to deal with neutral stacks.

When you have done everything on this lower-level area, you should be ready for the mini-boss fight. Load up your main hero with units and battle boosts. Take stairs (4-4'), (5-5'), and eventually (6-6') to the upper level. In this small area you can challenge the quite-powerful Stronghold mini-boss guarding Fort J. There is also a second Warpath Lodge (W) to flag.

After you defeat the mini-boss, the first barrier is lifted. You can go back to Town I and use stairs (7-7') and (8-8') to advance to the next area.

Your next opponent is Haven, controlling Town K on the lower level, as well as Fort L and Town M on the upper level. The two areas are connected by stairs (9-9'). The Haven mini-boss in front of Fort L, and he is also dormant. However, as you can expect, there will be at least one hostile hero coming at you. 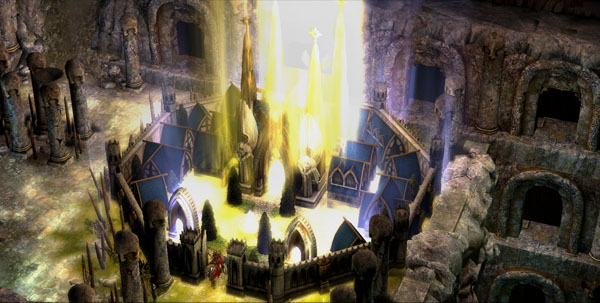 By now you should be mighty enough to handle the town garrisons and mobile heroes with ease. Clear the area except the mini-boss. Then wait for your new week for more units, and visit as many battle boosts as possible. This mini-boss is the most difficult so far! (Too bad, can't fight Jorgen as a faceless). If you received another a stack of creatures back in the ruins at (3), leave them in your town. You will get a good group of upgraded top-tier units after this fight. 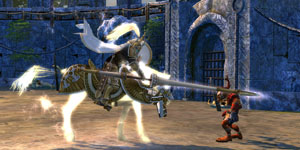 Your last opponent is Necropolis (so you might want to adjust your weapon and equipment), controlling Fort N, and, after stairwell (12-12'), Fort O, and Town P. This is largely a linear area, with the exception of a small dead-end south of Fort O harboring a creature building. Same routine here - beat a mobile hero and take everything from them!

The immobile Necropolis mini-boss guards the final stairwell at (13-13'). So you know what to do - after taking all the forts and towns, visit battle boosts and wait for a new week's growth. The mini-boss looks menacing, but should go down pretty quickly. You can always wait for another week if you don't feel comfortable.

Now there is no other enemies except for the final boss! Your army should be more than enough to defeat it. But hey, feel free to wait for a kick-ass army and visit more battle boosts. This is the last battle of the game, so you may as well be as powerful as you want! 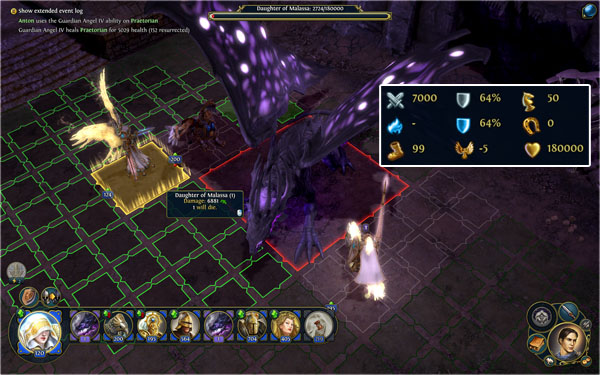 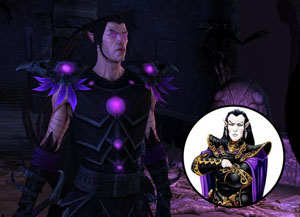 180K hit points - the "healthiest" boss! The dragon has 99 movement points, but it does not move. Instead it uses a powerful ranged breath attack that shoots out like an Imperial Griffin's battle dive. So don't line up your units to let the breath hit multiple targets at once. You will receive an achievement if you always avoid the breath to hit multiple targets (it is ok to let it hit a stack protected by Praetorians, though). The breath also temporarily disables the target stack's special ability.

Otherwise, just cast your best mass buffs and keep swinging at the boss. She is a living creature, so Life Drain works on her. There is nothing to hold you back!

Congratulations for truly finishing the Heroes6 campaigns! I hope you had a great time! Let's wait and see what Raelag will do to eventually make him Agrael in the expansion. :D