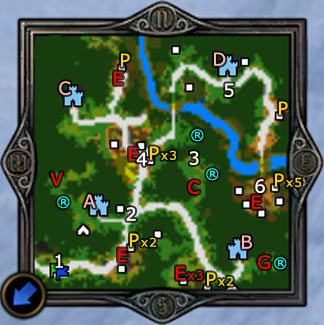 The 2nd mission of the new Haven campaign is fairly easy and short. There are four Haven towns to be destroyed (marked with pink letters A to D). None of the towns feature significant garrisons and the enemy heroes inside (if any) are completely dormant.

Instead of flagging Peasant Huts, now you need to burn them down. Compared to the last mission, you need to burn nearly twice as many - 14 huts to be torched in total. They are again marked in yellow P on the map. 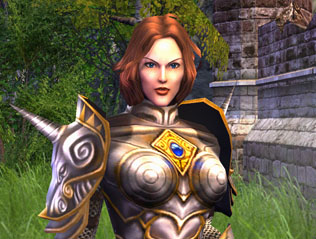 To add some spice to the mission, you are given a strange secondary objective - to save (pick up) the "innocent" peasants (Enforcers, marked with red letter E). You still torch their huts to the ground, though. In order to complete this side quest, you need to pick up about 5 stacks of Enforcers. The reward is really nice - Freyda gains 1 point in each of her 4 stats.

Personally, I picked the Blind spell as the starting bonus, because it is the only bonus that carries over to future missions. The spell helped me reduce losses in a few battles. This mission is quite easy anyway, because you will pick up fairly large stacks of Renegade units throughout the map. The 10K gold bonus is actually a little bit "too generous", because you won't have enough places to spend it.

Freyda starts in the SW corner (1). Laszlo is still around, but now he has his own mind. Laszlo follows Freyda closely (he can act even before his turn comes up), and from time to time, he gets rid of neutral stacks lying ahead. Laszlo can also pick up your Enforcers (required for the sidequest), so as soon as you see an Enforcer stack or any Renegade stack (which always joins you), rush for it before Laszlo does!

Laszlo might help you pick out a few Peasant (Inferno) stacks, but nothing bigger. 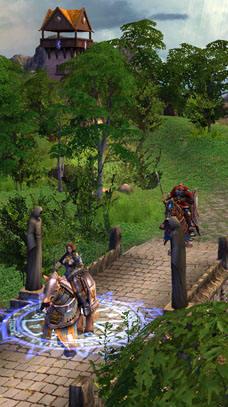 Proceed to the east to pick up your first stack of Enforcesr, and burn down two Peasant Huts. When I tested difficulty on this first stack of Enforcers, I got 81 Enforcers to join on easy, and 51 on heroic. So it seems that difficulty does play a small role here. The Peasants in this mission usually turn into low-level Inferno creatures. These Imps and Familiars never hesitate to suck your mana dry.

Follow the path north to flag an Archer Tower (2). You can see the first Teal town (A) immediately to the west. Take it! Too bad you won't be able to keep and develop any town in this mission. From Town A, if you proceed further west, you can pick up a fairly scary stack of Vindicators (V) inside. They are very useful cannon fodder against various high-tier, neutral stacks guarding stat boosts and artifacts.

Come back to the crossroad (2), and this time go east. With the Vindicators you can now easily hack through the tier-6 stack guarding another opening to the north. There you can pick up a big stack of Crossbowmen (C), and visit a Hill Fort (3). This Hill Fort only converts basic units to regular upgrades, so they still cannot be merged with your Renegade units. At least you can Battle Dive again!

Next, follow the path south, you will see 2 more flammable Peasant Huts and 3 juicy stacks of Enforcers. On your NE you can attack the second enemy town (B). Don't miss the large stack of Battle Griffins (G) on your east! They are very useful in subsequent battles, especially sieges. If you have to throw away a stack at this point, discard the Squires.

Again, backtrack to the crossroad (2), and this time follow the pavement north (4). Three more Huts are scheduled to be demolished, plus yet another Enforcer stack. If you have picked up all Enforcer stacks up to this point, it is likely that you can finish the secondary objective here, and claim your 4 points of bonus stats on Freyda. Nice!

Next, take the NW route and siege Town C next, followed by a small deadend to the north for yet another Enforcer stack begging you to burn their house. There is a Trading Post just south of Town C. Feel free to convert all your resources to gold (but you probably have no place to spend it). South of the Trading Post is a Mana Spring, where you can double Freyda's mana. 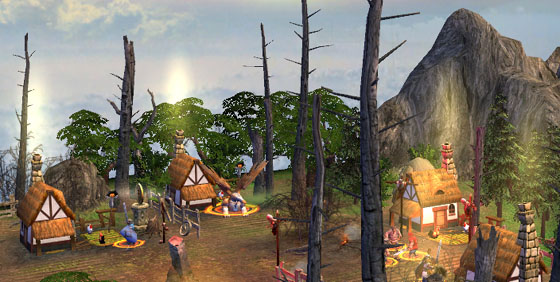 Are you thinking what I was thinking? -- Where is the "Nuke" button?

Proceed to the east and you will soon see a bridge leading to the north. There is a Witch Hut (5) just south of the Teal town D. Wipe this last Teal town from the map and follow the paved road to torch yet another Peasant Hut. On the south you can see a Tomb of the Warrriors, where you sacrifice 3 points of morale in the next battle for a random artifact.

Finally, cross another bridge to see the final batch of huts. Right after burning down the last, 14th Hut, the sky turns dark and stacks of demon armies warp in! You should have more than enough leftover units to send them packing. Mission accomplished!

Hopefully there won't be any more Peasant Huts in the next mission.