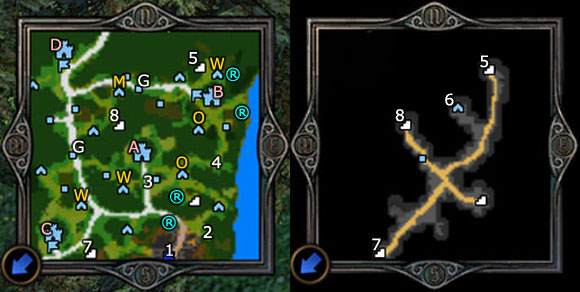 Pick the 15 Vindicator starting bonus. They are very useful, but not in battles.

This is a straight-forward mission - there are four Haven towns (marked in pink A to D) to be occupied by Freyda. As soon as you take the last one, the mission is accomplished. You can develop towns you capture.

From your starting position (1), head straight to the first town (A). A stack of Peasants vaporizes in front of your eyes, but nothing else happens (a script failure?) There is a free stat boost (R) on the side of the road and a Witch Hut to the east (2) that you can visit now or later. Take Town A from Teal as soon as possible and start building. You receive a small stack of Renegade reinforcements as a reward.

Before or after taking Town A, you can flag a Barracks at (3). Normally Footmen and their relatives are not really useful, but they are very important in this mission. All of the mines you flag will be recaptured by spontaneously-spawned Teal units within a few days if you do not put at least 10 units of Footmen (or better units) to garrison the mines. (The game will also tell you about it when that happens.) However, once a mine is properly guarded, it will never be attacked, and therefore will remain safe forever.

One of the new features in the expansion is the Caravan system. If you are not familiar with it from HoMM4, you can think of it as ordering pizza. You can place an order from home and the pizza will be delivered to your house after a short time or it is free. In the game the units are the pizza and the Caravan is the delivery guy. The only difference is you always have to pay first, despite the possibility that the delivery might fail.

To start a Caravan delivery, you can go to the creature purchase interface of any town. You can purchase (order) creatures from another town or from a creature building. As soon as you pay, the units will be packed into a Caravan outside the town or building. The Caravan starts moving towards the destination town when you hit End Turn.

The game also tells you how many days it takes for the caravan to arrive. Generally speaking, Caravans move faster than heroes, but they are not very good at avoiding obstacles. One of my Caravans actually got stuck in front of a garrison, and blocked my access to it as well. Another strange thing is that you cannot package already hired troops (inside a town) into a Caravan. You have to hire them fresh from reserves.

By the way, you might have noticed that un-hired creatures can now accumulate in creature buildings, so even if you forget to hire them for a week, you can always hire them later. This is a very considerate design! 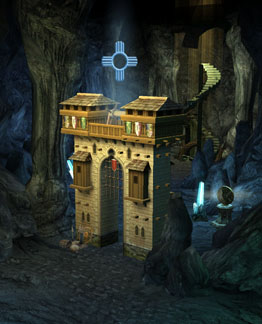 Three kinds of resources are usually in shortage in this mission: Wood, Ore and Mercury (the corresponding mines are marked with yellow W, O and M). Fortunately, none of the mines are guarded, so you can send out a low level hero to flag them one by one (don't forget to leave 10 Footmen in each).

From Town A, head east to then north to take your second Town (B). There is a Trading Post (4) on your way. The Trading Post offers a discount in resource exchange, equivalent to having three Market Places. In the meantime, send a low-level hero to flag mines in the opposite direction. The two Sawmills are especially important. AI heroes here are again dormant in this mission, so feel free to flag mines just outside their castle gate, as long as you have enough Footmen.

After taking Town B, you receive another small stack of Renegade reinforcement as a reward. That's all the Renegade units you have for this mission, though. Flag another Sawmill, and you can now enter underground from the stairway at (5). Follow the paved road south and you can take a side step to flag a Gold Mine (6). Then, follow the road all the way south, to take the stairway at (7). You emerge just beside the third Teal Town (C). That was some underground shortcut!

Now you own three towns and the Teal AI only owns one. Your victory is just a matter of time. Unfortunately, you cannot build the towns all the way up to the maximum. Your Mage Guilds are capped at level 3 and you can hire only up to basic Tier 5 (Priest) and 6 (Cavalier) units. 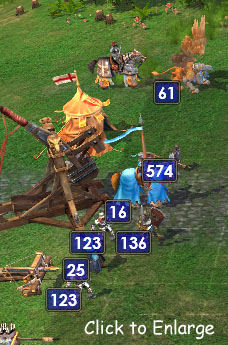 In the meantime, you can collect the rest of the stat boosts marked with blue (R), while watching your Caravan ship units around. You only need to have one Griffin upgrade facility first, since you can easily gather the basic Griffins with Caravans. The only Alchemy Lab is beyond the garrisons (marked with G). However, by the time you break through the garrison and flag this Alchemy Lab, you may as well challenge Duncan in Town D and end this mission.

By the way, the Training Ground mechanics have been adjusted as well. Now you cannot train as many Peasants to Archers as your bank account allows. There is a pitiful limit on the number of units you can train per day. This number slowly grows.

When you feel ready, grab all units you have, break the garrison and siege Duncan's castle (D). The weakest garrison among the three is located underground. When you take the stairway at (8), you will emerge right in the heart of Duncan's quarter. Duncan is quite powerful as the mission boss, and his diving Griffins might be able to wipe out your Marksmen before they get a chance to move away! (Now high morale also happens on Battle Dive, making Imperial Griffins deadlier than ever.) You may need to split up the Marksmen stack like me (shown in the picture). This way, at least you can keep half of the stack alive.

If you tried to gather all units available, you should have some ranged advantage here after your own Imperial Griffins dive out Duncan's Marksmen. It is better to wait for the defending units to come out. Freyda's specialty is the improved Haste spell according to her level. By now, you should be able to cast some nasty Expert Mass Haste to keep the action going. Ths mission ends when you defeat Duncan!

Duncan: I'll have your gold by tomorrow!