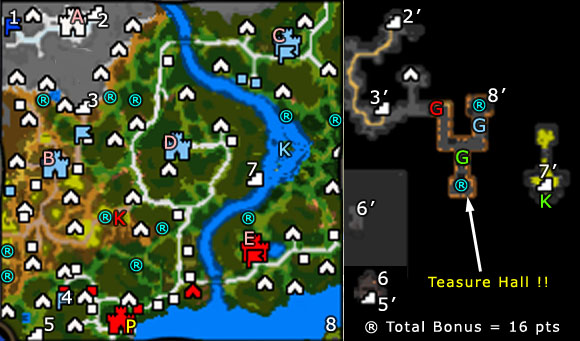 The new Haven campaign finale is quite a standard build-up-and-conquer scenario, but there are a few interesting twists in it. Let's start by picking the 2 Champions. There are hundreds and thousands of gold involved this mission, so the cash bonuses do not make a real difference.

The Town Portal and Summon Creature spells save you a lot of time in this mission.

Escaping from the snowy territory of the Dwarves, Freyda starts in the NW corner (1). The Paladins featured in the cutscene will join you. There is a random, low-quality artifact just south of Freyda. On your way to it, though, you receive an ambush warning. The ambush consists of elementals. I got Air Elementals here. 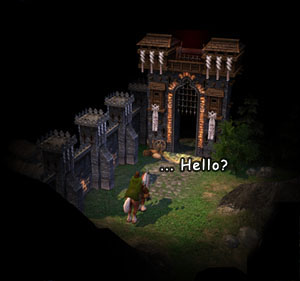 Go east a bit and you can see an Abandoned mine (Crystal Cavern) to your NW. Flag it or not - you should soon take the lightly-defended Dwarf town (A) and start the cash flow. Take the stairway at (2) to wave goodbye to the snow!

You are now in the underground passage (2'). Follow the path south, and you will see the exit (3'). However, to your NE there hides a gold mine, which is quite worth the extra days of travel, since you probably won't come back here for a while.

The exit (3') takes you to the ground level (3). As soon as you emerge, a Teal hero attacks you, but his army is laughably weak. There is a Teal town (B) just south from here. You can either take it now or rescue Duncan (4) first. There is a medium-sized garrison holding Duncan. If you have a well-built Freyda by now, you should be able to break it with Freyda's starting army.

As soon as you rescue Duncan, all Teal towns (B, C and D), buildings, and heroes will convert to your blue flag. Therefore, you should ignore the various mines surrounding Town B and rescue Duncan as soon as possible. 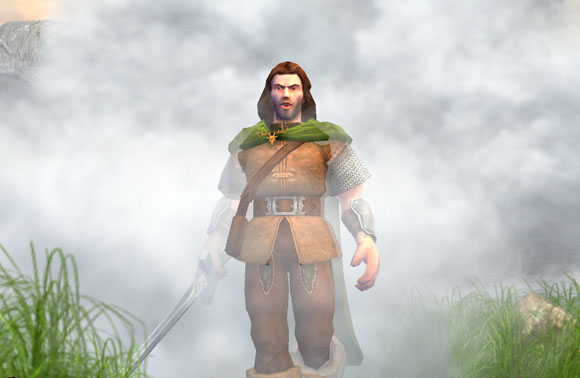 Duncan: *Cough* Okay, okay, I will come out! Don't need to release that tear-gas!!

Duncan joins at level 23. His skill choices are quite standard (and slightly boring) for a Might hero. I would have swapped Defense for something much more aggressive (and thus useful in a campaign), such as Luck or Dark Magic. Logistics is good for a supprting hero, but there are plenty in the Tavern.

Note Duncan knows almost no spells at first and he does not have the mighty Master of Wrath. Make that a priority for subsequent level-ups.

Since Duncan is still weak, you probably don't want to split any army to him at first. It will be nice to level Duncan a bit before the mission ends, though, as both Freyda and Duncan will show up in future missions. Unfortunately, it is impossible to level both Freyda and Duncan to the level caps here, due to the relatively small stack sizes for a mission finale. Where is our friendly Sylanna's Ancient level-up tree?

Now all the Teal buildings and heroes are yours. There are a few things you should pay attention to: 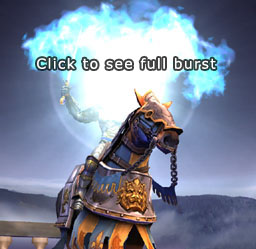 Watch out for the red hero Andreas. He is usually roaming around in the former Teal territory. AI heroes love to chase your army-less hero around, so you can use them as the bait. Take out Andreas as fast as you can, so you can freely explore the map to flag mines and pick up stat boosts.

Andreas' starting army is not very powerful (but Andreas and his killer Ballista are tough), so you should gather everything you have, and defeat him before he goes back to a Red town and replenishes his army.

Your next goal is to take out one of the two remaining Red towns (E) as soon as you can. If you have sent Andreas packing already, Town E should be guarded by a very low-level Renegade hero, Lorenzo. You will be surprised how he bites dust without a scream, even though his army overpowers you 5 to 1!

The Red AI should have built up Town E very well, so you can immediately learn the precious Summon Creature and the Town Portal spells. Your traveling efficiency has just doubled! 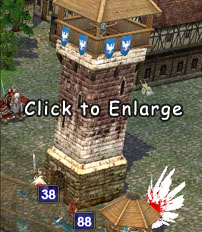 This Town E is also the only town in this mission that allows you to hire Angels. There are two Haven Angel buildings around Town B, so you can hire quite a powerful Angel army by the end. You can find a Hill Fort at (5), which allows you to upgrade Angels to Archangels. Great!

After owning all five towns, you can take your time building up and exploring, since the Red AI is again dormant and will never come out from the garrison door. There are a lot of stat boosts (R) on the map, netting a total of 16 points! (Just for your information, the current single-mission record of stat boosts is still held by C5M4 in the original HoMM5, 21 points.)

When you feel powerful enough, venture down the stairway just south of the Hill Fort (5). The Succubi Mistresses at (5') yield quite a few resources. The Archdevil further inside the cave guards a two-way portal (6), which leads to a small, isolated floating land mass (6'). You can pick up a nice artifact there, but nothing else. 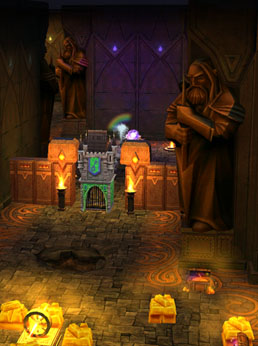 North of Town E is a stairway (7) that leads to another small underground area (7'). You can find a Green Keymaster Tent (Green K) nearby. If you go north from there, you can pick up an interesting artifact. In my game there is a Markal's Skull (yack) glowing and floating around! It is not really useful for a Might hero, though.

The Green Key is part of the Key trio required to unlock a HUGE Treasure Hall underground. You can find the Red Keymaster Tent SE of Town B (red K). The Blue Keymaster Tent (Blue K) is just NE of the stairway 7, in the middle of the river.

After collecting all three Keys, go downstairs through 3 (where you came from at the beginning) and unlock the Red Gate (red G) to the east and subsequently the other two gates (green G and blue G).

The treasure hall is a spectacular eye candy, but does not really contain anything wonderful inside. The chests are not any larger than the regular ones (not like those huge chests in C5M4 of the original game). The tiled floor somehow consumes a lot of movement points as well.

Behind the Blue Gate you can find a two-way portal (8'), which takes you to a small, isolated island at the SE corner on the surface. A pack of Fire Dragons would like to join you! 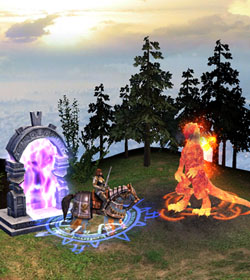 When you are done with exploring, gather all the troops from your towns, upgrade them properly, and march towards the Port town (yellow P). You need to pass a garrison, which is more powerful than anything you have seen in this campaign. It consists of:

The number does not grow, so you can eventually outgrow them. In my game, I spent about 6 weeks just to visit all the stat boosts, so I ended up with a huge army that ran over the garrison unscratched even from Quick Combat results. You can take out both garrisons to gather more experience points. Sweet!

After facing the huge garrison, you would probably expect some serious campaign finale battle. However, the defending army in the Port Town is extremely disappointing. Somehow the AI stops building at tier-three, even when they get Andreas back. Hopefully, this will get fixed in a subsequent patch. 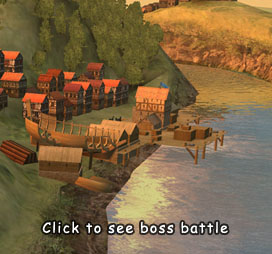 After taking the Port town, build a Shipyard, and purchase a ship. You are not done yet - there is one last battle. As soon as you board the ship, the mission boss Irina spawns, sails forth and attacks you. Irina is a powerfully-built Haven hero at level 24, almost as good as my never-miss-a-stat-bonus Freyda. I would happily trade Duncan for Irina on any day! Irina leads an army that is about half as powerful as the garrison(s) you just defeated.

However, if you have spent time visiting the stat bonuses, your army should be able to sink Irina's ship in 6 moves (1 move = 1 stack down). Just for an example, the Imperial Griffins' initiative is improved from 15 to 25 under Freyda's (Lv 29) Mass Haste. Factoring in the frequent high morale, that's more than 3 actions per hero's turn!

Winning the battle brings you the final cutscene, which justifies Duncan's jail time. Congratulations for finishing this interesting and not-very-difficult Haven campaign. Next, we will move into the new race of the expansion, the Dwarves. 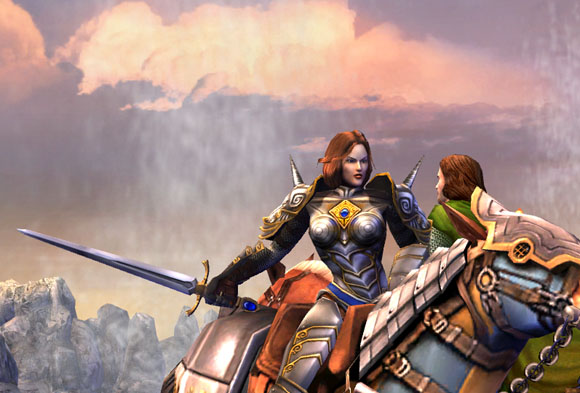 Deeply irritated by Duncan the dirty-minded, Freyda is about to burst again! See the distortion of space-time?