CH →
Walkthroughs →
The Cultist → The Promise
﻿

The Cultist → The Promise 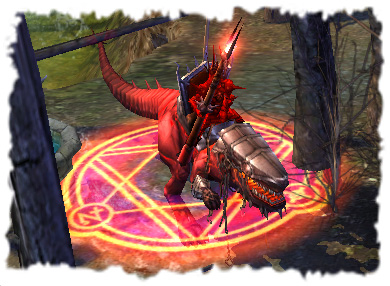 This is one more race-against-time for Agrael. Even with no one on your tail, you may as well lose the race by spending too much time off road. There's only one way for you to go in this map; a long road with lots of bends and curves.

Visiting the various Huts of the Magi along the road tells you where your opponent is, but it is not necessary as you can't do anything to slow him down. (On 1.3 heroic, the enemy hero finishes his track on the 11th day, so mostly you can take only 11 turns!)

This mission is quite short, and it is impossible to hit the level cap after patch 1.2, as no experience is given when you defeat the boss. The next mission is the hardest in the campaign, so you really want to accumulate more experiences in this scenario. Try not to miss any spell shrine, and convert treasure chests to experiences whenever you can. Also, fight as much as you can, as long as you do not lose to the boss in the end.

Troop conservation tactics has gone up a level when you learn the spell Phantom Force. This spell was widely regarded as the one of the most powerful spells in HoMM5, and it has been toned down in every subsequent game patch released by Nival. Patch 1.3 hits it the hardest, by increasing its mana cost to 300% -- to a whooping 18! If you are playing on pre-1.3, then definitely try this spell out. You will be surprised by how much you can accomplish. If you are playing patch 1.3, you'll probably run out of mana after 2-3 casts. Fortunately, there are a few mana wells along the track to cover you up.

Get the gold in front of you and the imps from the Imp Crucible, then follow the road east. There's no getting around the scouts, so you need to deal with them first. Next, kill the spectres to get their gold and learn a randomly-determined level-one spell. Just north of you are some hell hounds waiting to join you (all inferno creatures in this scenario are scriptted to join you). You can also buy some more at the Howling Kennels. On SE you can see skeleton archers guarding some cash and another free first-level spell. Head north west past the obsidian gargoyles to the treasure chest - it's guarded by assassins. 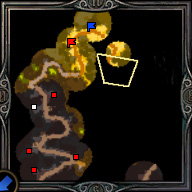 At the following bend, there's an Inferno Military Post with succubi and pit fiends. You can also learn a second-level spell here. Ignore the troublesome liches and attack the minotaur guard to get the gold. Follow the road around the bend to learn another second-level spell, and get to the Stable. At the next treasure chest, assassins join your ranks (if you fought the first bunch) and so does the stack of horned overseers. Ignore the Demon Tower (as your cash are better spent elsewhere) and go to the second Inferno Military Post. Ditch the assassins if you need to make room for all the troops there. You can get sulfur nearby to hire the devils if you want. Follow the road, grab yet another first-level spell, and head east. Don't forget to visit the Star Axis (spell power +1) on the way.

Finally you get to the desert. Fight the golems and head north to the Hill Fort guarded by some genies. Upgrade your men (succubi are supposedly female, though) and continue north to fight some tier-5 creatures, then head towards the monument. If Veyer beats you to the blue Haven hero, you lose this mission. Hopefully you have an earlier save if that happens.

The Haven army is quite easy to beat, but the Demon Lord Veyer, whom you'll have to fight immediately afterwards, is a bit harder. (p.s. No matter where Veyer is, he will be teleported to you immediately after you defeat the Haven army.) In earlier patches, if you lose the fight with Veyer, you'll still complete the mission (and if you win, you gain experiences from him.) 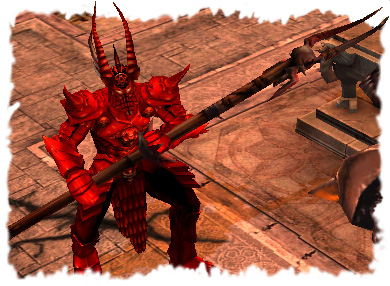