CH →
Walkthroughs →
The Cultist → The Betrayal
﻿

The Cultist → The Betrayal

Spoiler: view a screenshot of the surface (1.5 MB)

The tutorial is over; we will have some real challenge soon. Before we start this exciting campaign, let's briefly discuss what skills are useful for your main hero - Agrael. If you want to survive heroic, you better start planning early.

Agrael is a typical might hero. Most of his stats will be distributed to attack. The lack of spell power and knowledge makes him a rather-ineffective user of destructive magic and summoning magic. Therefore, if you want to pick up a magic school for Agrael, Light or Dark magic will be higher in priority. While picking up either Light or Dark, consider Master of Wrath / Mind, which has the best mass-effect spells in the game. You can forget about Sorcery as you can pick up Phantom Force as a free spell in mission 2.

A handful of passive skills are useful for Agrael. Logistics, which brings the feat Swift Gating, will be given automatically early in the campaign. You may also want to pick up Luck (with Swarming Gate), and probably Leadership (with Master Gating). Agrael also starts with Attack. If you pick up the feat Tactics, then a couple of your units will be able to hit enemy's range units before they even act! You may also just pick up Enlightenment and enjoy the stat bonuses and the 50% extra mana with intelligence (might be really useful in patch 1.3, where Phantom Force requires a lot more mana to cast).

Another popular Agrael build is to follow the racial ultimate skill -- Urgash Call's skill set (Logistics, Luck, Dark, Attack). Even if you are lucky enough not to be forced to pick up useless feats, you will probably hit it in mid-late mission 4, or even mission 5. The hardest part of this Demon Lord campaign is actually mission 3 and early mission 4, so by the time you get Urgash Call, it is not very meaningful.

The hell chargers and the cerberi are both pretty useful. 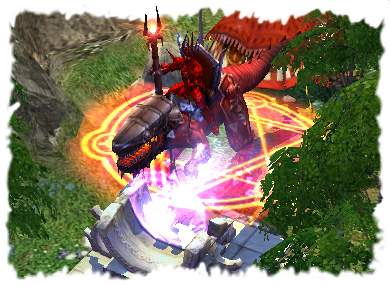 This scenario is all about speed - so you have little time to explore the entire map. This is not intended as a complete guide, but rather just a walkthrough. If you want to explore more of the map, feel free to do so. Either way, you'll need a significant army at the end of the scenario, so it's important that you preserve your troops through good tactics. Most Inferno creatures can, depending on your Demon Lord's Gating skill, gate in more troops - that is one way of maximizing the potential of your army. When gaining a level, take the Gating skill upgrades.

Follow the road south until you see some priests guarding the Boots of the Swift Journey. Kill the priests and pick up the boots and the campfire. On heroic the boots might be simply too costy to you, but you should do fine without it anyways. Visit the Hut of the Magi; you'll see a Red Keymaster Tent. This is your first target. Continue south to the Witch Hut and learn Logistics (very useful throughout the campaign). If you head south from there you will be able to gather some free demons and imps.

At the start of day 3, Godric (and his insanely large army) appears at your starting point. You can, of course, not allow yourself to get caught by Godric. Rutger, who appears in the north western corner, has a smaller army and is possible to defeat - but that will cost you a lot. You should try to keep yourself as far away from them as possible. If they get too close to you, try to seek refuge in a Sanctuary, and run towards the opposite direction once they gave up waiting.

Continue eastwards to the war dancers and past them, along the grassy path in the forest. At the other side, next to the Redwood Observatory, is a stack of hell hounds waiting to join you. Head down the south western path towards the Archers Tower and turn east and then south to enter the Stables. South of the Stables is a Crystal of Revelation, kill the skeleton archers and head east to get some cerberi (your inferno army power house!) to join you. You should also have time to visit the Dolmen of Knowledge and get the treasure chest guarded by the squires. 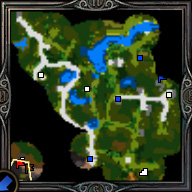 Head back, past the Stables, and turn east along the road. Turn south on the other side of the mountains, towards the footmen. Eliminate them and continue south past the Sanctuary to fight the minotaurs. Get the Red Keymaster Tent and the treasure chest. Go through the portal, through the Red Border Guard and down through the Subterranean Gate Entrance. You can pick up a powerful artifact (+4 attack) just east of the stairway, if you are willing to lose some units to the tough creatures guarding it.

Once undergound, kill the plague zombies and take their gold. Turn north west and get the troops from the Demon Tower. At this point your credit balance is important. I had about 4500 gold and was able to buy all the available troops from here on. If you have less than 4500 gold, you should consider not buying the demons as there are better creatures ahead. Head north and kill the vampires so you can snatch their gold. Continue north to another Demon Tower and get some cerberi to join you. Keep heading north until you get to some Howling Kennels. Buy all of them and head south west to an Imp Crucible. From here on it's straight south, ignoring the fire elementals, until you get to a Hill Fort guarded by some wights. Kill them and upgrade as many of your troops as possible.

Follow the tunnel as it bends to the south west, past the water elementals and the Artifacts' Merchant (the scenario is nearly over and the artifact doesn't carry over). Kill the spectral dragons and get experience from the treasure chest (you won't need any more gold in this scenario). Only thing left to do is to head up the stairs and hope you've brought enough troops. Good luck. 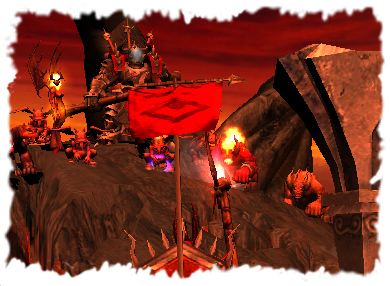