Yog and Crag Hack must defeat the Necromancers to win the scenario. However, if either hero is defeated in combat, the scenario is lost. Yog and Crag Hack are limited to level 33 but will carry their experience, skills and spells on to the next scenario. Starting Bonus: 6000 gold or 15 Crystal or Boots of Polarity. 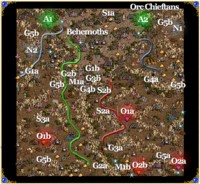 Pick the 6000 gold as your bonus and be prepared for a great tent hunt. You need to find four tents before you can conquer two towns that are otherwise unreachable as well as gaining access to the gate system.

I picked Crag Hack as my main hero primarily because he had Expert Earth and the Town Portal spell while Yog only had Expert Air. Of course, your game may vary so feel free to use whichever one you think is better.

Concentrate on building the Ogre Fort, Cliff Net, and Behemoth Lair, and the Citadel in the first week even at the expense of the City Hall. You can do that in the second week as it's more important to start producing troops as soon as possible as you don't want to wait for the enemy to outproduce you.

All of the wandering stacks are from the Stronghold towns so the chances of some joining is pretty high, especially if you have the Diplomacy skill. I had Yog visit Creature Generators and flag mines while Crag attacked wandering stacks hoping for joins. Once he had a good number of troops, he attacked the Orc Chieftains who are north of A2 which resulted in getting the Endless Sack of Gold and 50,000 gold. With the Resurrection and Blind spells, I suffered no losses from this battle.

If you had many joins, you can always attack the Behemoths between A1 and A2 but if you didn't, waiting until the second week for reinforcements would be a good idea. In addition to adding to your Behemoth troop total, you get the Ogre's Club of Havoc which adds 5 to Attack.

At the start of the second week I gave Crag the Rocs, Ogres, and Behemoths and everything else to Yog. I made getting these upgraded structures a priority in one of the towns and in the other town I worked on building a City Hall.

I had Crag go through the northeast passage on the dark blue path to visit G4a and take over N1 since every bit of gold helps. I then had him go back west and south on the red path to take over O1a and visit G3a. Meanwhile Yog was clearing out the northwest area on the light blue path including N2. Since he had a bunch of level 1-4 troops he had problems with the Ghost Dragons guarding G1a so Crag portaled in and took care of them. Meanwhile Yog was going back on the green path to take visit G2a which would enable Crag to go through the floor quest gates. Once the last tent had been visited, Crag portaled to A1 and made his way through them. There were three events of 50,000 gold each which really helped getting additional troops. I then took over O2a (purple) and O2b (orange) as well as visiting G5a which opened up all of the black gates guarding the mirror portals.

I make this process sound easy but it took me a few times in order to do it well. The key is to not lose sight of visiting all of the guard tents and in only portaling back to your original towns when the enemy gets too close. Once you can make it to O2a (purple) and O2b (orange) , preferably as soon as possible, the enemy is just about defeated.

What helps in this are the quests you can and probably should do. S1a (west of A2) gives 20 Thunderbirds once you've defeated Nimbus. S2a (west of O1a) gives 25 Cyclops Kings if you defeat the Ancient Behemoths at S2b (north of S2a). S3a gives you 4 Dread Knights if you give 5 Wood, 15 Mercury, 5 Ore, and 2500 Gold.

I then took over all of the castles but one using Crag Hack's Town Portal spell except for one and gave a secondary hero troops while Crag and Yog got to level 33. The Altar of Sacrifice also puts all those otherwise useless Necromancer troops to good use by giving experience. Building up the Mage Guilds will help greatly in the upcoming maps, especially the Destroy Undead spell.