Crag Hack must find all the pieces of the Legion and return them to the town of Hartferd to win the scenario. However, if Crag Hack is defeated in combat, the scenario is lost. Crag Hack is limited to level 30 but will carry his experience, skills, and spells on to his next scenario. Starting Bonus: 3000 gold or Mage Guild Level 2 or Equestrian's Gloves. 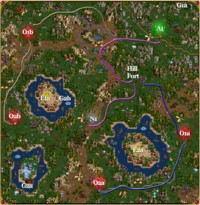 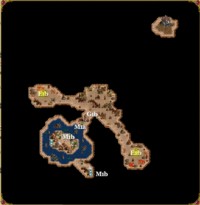 The most difficult part of this campaign is to make sure the secondary skills Crag has are as good as possible because the only skill that's set in is Offense. What I picked was Ballistics, Artillery, Earth Magic, Logistics, Archery, Wisdom, and Air Magic. The only skills I think are necessary are Artillery, Earth Magic, and Wisdom because the Ballista will help you out before you get a lot of troops and will do a lot of damage while Earth Magic/Wisdom will let you learn Town Portal. Magic Resistance won't be necessary since the enemy heroes on this map didn't use a lot of magic. For the rest, pick your favorite skills and if you can get Tactics all the better to protect your Archers.

I recommend you pick the Equestrian's Gloves as your bonus as you'll need to do a lot of running around in the first month.

Hartferd, your starting town at A1, is extremely limited in what you can build and while additional buildings are given to you for free this is done too slowly to be relied on and you can never build the upgraded buildings. Fortunately, there are troop generators near Hartferd that you should visit. What I did was hire additional heroes and give Crag as many troops as possible and then went northeast a bit to purchase a Ballista. I then went southwest to hire archers and kill the Dendroid Soldiers to flag that gold mine. Then I went to the east to flag the Swordsmen generators and finally back to the northwest to flag the Pikemen generators. Finally I went north of A1 to flag the Griffin generators and then back to A1 to upgrade troops. All this time I was building up the Mage Guild in A1 because I wanted to get to level 4 before breaking out of this area so that I could get the Town Portal spell. There are enough loose resources that you should be able to have enough if you trade for them at the Marketplace.

On the 10th day, I went west of A1 and attacked the Peasants who will always join and hired more from the Hovels in the area. The 450 Peasants will be good bait against the Crusaders you have to defeat in order to face the enemies. Your next stop is the Hill Fort which is to the south of the Crusaders. After that, go to the south and visit A1. There are three Mercenary Camps which might give you good selections of troops if you're lucky.

I then hired as many troops as I could from A1 and then went to defeat the blue hero along the blue path. I did have to attack some Enchanters along the way and was able to attack some heroes outside of O1a which is another limited town. I went south to get to O2a which is not limited at all and Lord Chasim is almost as powerful as you are and could have a good collection of troops. Once you've defeated him and taken over O2a, blue won't give you any trouble which leaves you to concentrate on the tan enemy. Hire as many troops from O2a as possible and get back to the Hill Fort to upgrade your troops as the tan enemy will most likely be poking in your area by this time. Having Town Portal is really helpful as I went to A1 and then north to the Hill Fort.

During this time I had heroes by each of the four troop generators and, at the start of every week, had them visit the generators and take them to A1 so when Crag came by there were plenty of troops for him to take. Lord Velmer is another strong hero that you must defeat to weaken the tan hero. I followed the tan path, defeated Lord Velmer, took over O1b and south to take over O2b which eliminated the tan hero.

Now you can explore the map, attacking wandering stacks to earn experience and flag mines so you can build mage towers in each of your towns. When you're ready go to N1, buy a boat and go to the whirlpool so you can defeat Lord Tyranall on the southwest island. He has Expert Tactics along with 30 Champions, 60 Crusaders, 200 Halberdiers, and 150 Marksmen (two stacks of 75 each) but this should be no problem for you by now. Be sure to visit G1a (northeast of A1) with a secondary hero and have Crag visit G2a on Lord Tyranall's island so you can go underground and get the parts to the Legion. Go through G1b and another tower that only lets in Crag and then M1a which has two possible exits. The Legion parts are guarded by Ghost Dragons but they should not be a problem as long as you bring a decent amount of troops. Then use Town Portal and go back to A1 once you have all four pieces to win the map.