You must capture Castle Crypthome to win the scenario. However, if Gem or Gelu is defeated in combat, the scenario is lost. The heroes are limited to level 33 but will carry their experience, skills and spells on to their next scenario. Starting Bonus: 15 Wood Elves or 20 Silver Pegasi. 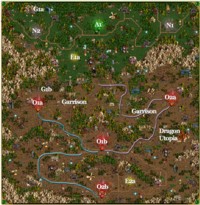 I picked the Wood Elves as my bonus so that Gelu would have a bigger army of Sharpshooters and Gem will be ok with her huge pool of spell points.

You are protected by Garrisons but that doesn't mean you can rest easy. I sent Gem to the east and Gelu to the west to flag mines and to take over N2 and N1. They don't have the Fort built so I used them for gold and relied on A1 for my troops. By the start of the third week I had explored the entire starting area and was ready to make the trip to the enemy area. I used Gelu for this because he had better Attack and Defense skills. He used primarily his Sharpshooters while Gem followed with the other troops and attacked the wandering stacks while Gelu concentrated on the enemy.

The two enemy Garrisons contain 600 Skeleton Warriors, 50 Black Knights, and 20 Bone dragons. Gelu used Expert Slow and his Resurrection spell ensured that no Sharpshooter was lost. He picked a direction at random and went east while Gem stayed in the area to flag mines and protect the starting area from any enemy hero. The fight with O2a (orange) was pretty easy and Gelu went to take over O1b (red). Gem used her Expert View Air to keep track of the enemy heroes and I had either Gem or Gelu portal to the nearest town to ensure it wasn't taken over. I also used Gem to transport more troops for Gelu (primarily Wood Elves so he could transform them to Sharpshooters) so that he wouldn't have to use his spell points for that.

Gelu then went northwest from O1b (red) to take over O1a (orange). He made sure to defeat any remaining orange troops to eliminate them from the game. He portaled back to O1b (red) and headed south to defeat any red heroes along the way. O2b (red) is protected by a Garrison which contains 100 Ghost Dragons, 60 Vampire Lords, and 80 Power Liches. So I left either Gem or Gelu in front of it while the other looked for places of learning and experience. Visiting the Dragon Utopia south of O2a (orange) is a good idea as that can be worth quite a bit of experience. Unfortunately, Gem and Gelu have a tough time gaining levels as they don't have any Altar of Sacrifice and, even if they did, could only sacrifice artifacts so would have a limited amount of experience as opposed to being able to sacrifice creatures.

After exploring as much as possible, Gelu attacked the Garrison with as many troops as possible and easily defeated O2b (red) to win the map.