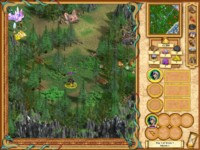 Ignore the piles of wood for now and head straight north. As you exit the glade, eight white tigers will join you. They won't be much help or hindrance, so put them into a separate army and let them pick up stuff (like, say, that wood). Keep moving north on the second day, and you should notice a neutral Nature town. Capture the town (it won't have any ranged troops, so summon in your favorite troop until you have enough to take the town) and then explore the area.

You'll find that you're boxed in -- at least until Elwin visits the quest hut at (114,60) and gets his first quest of many in this scenario. It seems that if you bring potions of mirth, quickness, resistance, and endurance back to the hut, the alchemist there will give you the cloud-silver you need to construct the mirror. So, after you flag the two resource buildings in the area, follow the path east.

Here's where you'll find the potions:

Once you have the four potions, send Elwin back to the quest hut to complete the quest (and also re-supply his troops), and send the white tigers over to the blue keymaster tent. Once Elwin completes the quest, the rocky area in front of the tent will disappear, and so the tigers will be able to visit it, allowing Elwin to pass through the keymaster gate beyond the bridge. 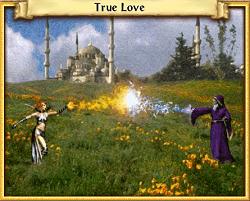 Almost immediately upon passing the keymaster gate, you should notice one of Green's Nature towns. Run over and capture the town, and then explore the area. You'll find the second quest hut behind the town to the west. The jeweler inside will fashion the cloud-silver you have into a mirror frame provided you give him 40 gems. Conveniently, there is a gem mine right next to the hut, but it will still take a while to accumulate what the jeweler needs.

So head out east and do some more exploring. Elwin himself needs to go to the quest hut once you have 40 gems, but there isn't any hurry to do this, so you don't need to keep Elwin close to town. In fact, it's probably better for Elwin to ramble as far as way as possible so he can pick up resources and neutral towns before Green and Red get to them.

But, eventually, once you have 40 gems, go ahead and complete the quest. The third quest hut is at (59,98), near a town. The merchant inside will give you some pure sand in exchange for 10,000 gold. But be careful. This isn't one of those quests where they ask you if you want to complete it. If you visit the quest hut while carrying 10,000 gold, you'll automatically complete the quest. So only visit it when you're ready.

The fourth (and final) quest hut is at (37,111) (along the coast). The dragon there will turn your sand into a mirror provided you free its mate. The mate is being held in the Red town in the northeastern corner of the map (past a quest gate). Once you capture the town, you'll receive a black dragon troop, and you should add it to your army. Then, when you visit the quest hut again, you'll win the scenario. So take your time before completing the quest, and try to get Elwin as much experience as possible (but chances are you still won't get him very close to level 28).