CH →
Walkthroughs →
Elwin and Shaera → Mark of the Tiger
﻿

Elwin and Shaera → Mark of the Tiger

Objective:
1. Solve the tragedy of the white tigers. 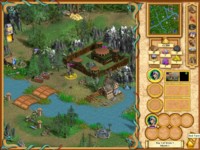 This is one of those maps that is very convenient for the computer players, but very inconvenient for you. If you cross the bridge to the southwest you'll find not one but two dragon portal exits nearby, giving the computer players easy access to your town and resource buildings. Luckily, the map is only medium-sized, so you'll never be too far away from home, and you'll be able to use the dragon portals yourself to get home quickly.

So visit your starting town if Elwin has nobility, and then cross the bridge to the southwest. You'll find that you have to help the white tigers with their "greatest tragedy" and that you shouldn't attack any of the Teal- flagged white tigers on the map. (They won't attack you, either.) So clear out the little island area except for the water elementals, and then cross the next bridge to the northeast. You'll find some Orange-flagged trolls there eating some white tigers.

After killing the trolls, you'll decide that the trolls are the great tragedy you need to help the tigers with, and, if you progress a little farther to the northeast, you'll find a Window of the Magi that will show you the location of all the trolls on the map.

Now you have a choice: there are two-way portals to the east and west, and you have to pick one to proceed farther into the map. However, the best one to take is the western one since it leads to the Nature towns owned by the computer players. (The eastern portal leads to Chaos towns as well as Nature towns.) Also, by going west, you'll be able to neutralize the enemy towns closest to the dragon portal entrances. 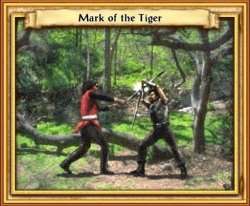 So head towards the western portal, stopping to visit the quest hut and some trolls along the way. The quest hut will offer you a Nature skill for 15 wood, but if you can't afford it yet, don't worry about it. You'll be passing this way often enough during the scenario, and you can complete the quest later. (Or you might want to just wait for enough wood. That quest hut has given me as many as three Nature skills in the past, instead of the promised one.)

Once you pass through the western two-way portal, you'll find one of the dragon portal entrances that leads to your starting town. If your army is looking sad at this point, then go back to town to re-supply your army and learn some new spells. Then head back to the same place.

Continuing west, you'll find another quest hut willing to trade a Nature skill for 15 wood, another group of trolls, plus assorted useful buildings. Eventually, you'll also run into one of Green's Nature towns. So take the town and then explore the area while you build it up. Then head south.

To the south you'll find one of Blue's Might towns. Take it or not, but explore the area and kill the trolls south of the town. Then head east to the "connector area" of the islands on the map. (You'll recognize it by the eight bridges.) Depending on how much experience you have at this point, you can go to any of the three areas connected here that you haven't visited yet. Each has a town plus assorted other useful buildings, and you can conquer the areas as much as you want. But none of them lead to the last set of trolls (to the southeast). To get there, you'll have to head back to your town and then take the eastern portal that you skipped before.

So once you've done what you want in the middle of the map, and once you've killed the last set of trolls (you should hear that Orange has been eliminated), head to the quest gate at (130,94) (along the southern edge of the map). You'll have to go back to your starting town first, but conveniently you'll find a dragon portal entrance with the last set of trolls. You'll still have to walk all the way back to the quest gate, but along the way you can trouble Green and Blue if they happen to get in the way (or even if they don't).

Past the quest gate you'll find the "Troll Lord" plus 80 trolls, but they shouldn't be any match for your army. In fact, the Troll Lord might attempt to flee, so kill him before he gets the chance. Once he's dead, visit the nearby tiger den to learn that the trolls were only an annoyance, and that the real tragedy is the recent stillborn deaths of the tiger cubs.

This revelation will open the way to an underground passage plus a red keymaster tent (to the west), so visit the tent and then head underground. You'll find Red's lands, and all you have to do to finish the scenario is defeat Red's main hero, Worllarc. But there are some optional stacks of undead creatures around if you want to pick up some artifacts or experience, which you might want to do since Worllarc's army won't be very powerful. In fact, Worllarc himself will only be level 17, and he won't have any level 4 creatures with him, so the battle should be pretty easy. Once you defeat Worllarc, the scenario will end.