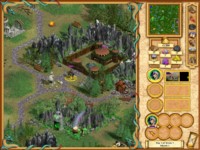 After flagging the nearby ore pit, sawmill, and tree lodge, head south across the bridge. You'll quickly run into an Orange Nature town, and, once you capture it (easy enough with summoned creatures), you'll make your corner of the map much more secure. (The only way in will be by your starting town.) So once the orange town is yours, take your time and explore the area, and also build up your two towns.

Note: There is a quest hut in the area at (65,104). If you kill the nearby medusae (they're next to a backpack, but they're not flagged), you'll receive a dwarven shield.

Once you clean out your part of the map (including the treasure areas past the two portals), head north. You'll soon find Splitoak, where Mirilass' brother lives. If you've learned a couple level 5 spells from your first two towns, then taking Splitoak shouldn't be too difficult, and when you do you'll learn that Mirilass is hiding near the blue keymaster tent in the southwestern corner of the map.

The only way for you to go now is west, so head in that direction. You'll find a neutral Nature town that should be easy to capture, plus another portal leading to a treasure area. Eventually, you'll come to the blue keymaster gate guarding Blue's town (Harke Manor). Blue doesn't have access to the command word, so it's stuck inside waiting for you. 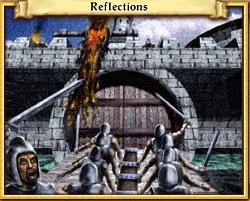 You still don't have any choice about where to go, so head south into Orange's domain. Orange starts out with three towns under its control, so it might put up a fight, and it might not. So play the area by ear, and capture what you can without losing too many troops. Everything in Orange's part of the map is optional; you just need to travel through it to reach the blue keymaster tent.

When you pass through the quest gate leading to the blue keymaster tent, you'll be attacked by a large army of Nature troops (including two faerie dragons). Summon in some phoenixes or faerie dragons of your own, and let them distract the enemy while you pick them off with your elves and elementals. Once the army is defeated, visit the blue keymaster tent and then take the dragon portal to the northern part of the map.

Harke Manor will have a reasonable number of troops defending it, and it'll have a castle, but the enemy hero will only be level 22, and you'll have seven towns supporting you (if you've defeated everybody else). So if you can't take the town on your first attempt, just wait a week and ferry in more troops and try again. Once you capture the town, the scenario will end.