To win, you must capture all enemy towns and castles and defeat all enemy heroes. Your Heroes will be limited to 12th level in this scenario, but your 8 strongest Heroes will travel with you to the final scenario of this campaign. Your choices for starting bonus are: 1 Angel, 3 Zealots, or a Prayer Scroll. 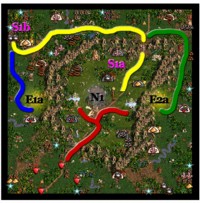 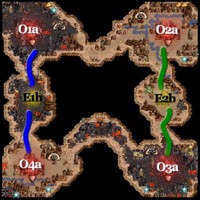 Definitely take the Angel as your starting bonus because that will make the entire level so much more easier, especially considering that Angels will make up the majority of your troops. The prayer scroll might be tempting but you will get ample opportunity to get it in a conquered opponent town and Angels always attack at maximum force anyway.

Since this is a small map and the opponent has four towns to your none, you have to act fast before you get overwhelmed. The first step is to give just the Angel to a hero of your choice (Christian in my case) and have him follow the red path. You will see a wandering stack of angels who will join you and head north to N1, a neutral town. Hire the angels available and build a City Hall for gold. Have Christian visit each of the Portals of Glory to the left and right of N1 and flag them which does require battling the defenders. You shouldn't suffer any losses with your larger force and the blessed ground gives you expert status in every spell you know. Now have Christian follow the yellow path and have a second hero travel with him to pick up any of the chests and visit other places of learning. This hero should be one that's ready for combat so definitely don't use a level 1 hero. Their goal is S1b and the artifact that is there.

At this time, the other heroes should be flagging mines and visiting places of learning. I put all of the troops on my best magic user and used her for clearing out wandering stacks to get artifacts, flag mines, and defeating any hero that appeared from either E1a or E2a. I had the heroes take experience from the chests unless the amount offered was just 500 or so. Even though angels cost a lot of money, you won't be using any for the construction of buildings so I think it's better to improve your heroes than get gold.

By this time, Christian and the secondary hero should have arrived at S1b and picked up the Angel Wings artifact. Have Christian give them to the other hero and have him fly over the trees to S1a to give them to the seeker for 10 Angels. I divided them into two stacks of five Angels each and sent the hero on the green path into E2a. Likewise, I sent Christian with his Angel army along the blue path into E1a. Their mission is to conquer all of the towns underground as well as defeating any opponent hero they happened to meet. I recommend taking O1a, O2a, and O3a (not necessarily in that order) and leaving O4a for last. If you get underground quickly, the resistance will be small and your Angels will easily be able to defeat everything in your path with no losses at all.

Just as with Homecoming, this step is optional but it will make the next map a lot easier. What I did was leave Christian just outside O4a with his army so the opponent didn't dare leave his town. I then took my other heroes and had them visit all of the places of learning, the tree that gives a free level, and the Learning Stones. I also hired four more Castle heroes and did the same thing with them. In the conquered towns I built their magic towers to level 5 to get access to as many different spells as possible and had all of my magic heroes visit every one of them. I also build an Altar of Fire in the Inferno towns to get +1 power and had every hero visit them to get this bonus. At the end of this, I had four heroes at level 12 and four heroes at level 6.

When you're ready to complete this map, give one of your heroes all of the Angels you have already and those you can hire from N1. Then simply attack the final opponent town. Just as with the other opponent towns, this battle should be extremely easy and you shouldn't lose a single Angel.

If you are playing just for time, you can skip training your heroes and just take all four opponent towns with two heroes, being sure to get the 10 free Angels from the Seeker.