To win, you must locate and flag all 7 Griffin Towers. Your choices for starting bonus are: Golden Bow, Lion's Shield of Courage, or Endless Sack of Gold. 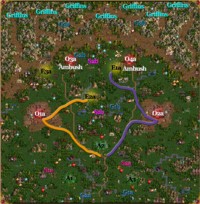 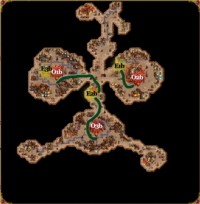 The Lion's Shield of Courage will give the hero wielding it +4 to all attributes and is much more valuable than the other two choices so pick this and give it to the might hero that you built up in the last two maps. You don't need the Endless Sack of Gold because there are so many towns that will be under your command that don't produce troops. The Golden Bow is a great artifact but the Lion's Shield of Courage is simply better.

This is another map where the enemy starts out with more towns than you and a bigger space to run around in. The only tactic that works best is for you to take out the Orange enemy (O1b, O2b, O3b) whose towns are underground. This is where taking the time to build up your heroes in the previous maps pay off.

Combine all of the starting troops and put them on your two strongest heroes. Have one hero take the purple path, take over O1a, and continue to E1a. Have the other hero follow the orange path, take over O2a, and continue to E2a. It doesn't matter in what order you take over O1b, O2b, and O3b but make sure you hold them for a week and prevent the Orange heroes from taking over any other town. There is a well by E2b so you can refill your magic points as your chasing down an errant Orange hero. Orange can be defeated in week 2 if you move fast and if your two main heroes are strong enough to not need any additional troops.

Now you can relax with most of the threat eliminated. The Tan enemy still has two towns at O3a and O4a, but they only send out the occasional scout and are easily defeated. Don't rush to take them over since they are protected by extremely strong ambushes which consist of 60 Familiars, 50 Infernal Trogs, 30 Harpy Hags, 30 Magogs, 20 Cerebri, 20 Evil Eyes, and 5 Scorpicores or 5 Efreet Sultans. I suggest not attempting this until you're ready to flag the Griffin Towers near the end of the map. The benefit to doing this is that you get rid of two very strong stationery Tan heroes that are found below G3a and G3b.

Flag the mines and build up all of your castles so you can get as many troops as possible to fight the garrison troops that protect access to the Griffin Towers. You'll definitely have the gold (especially if you build the City Hall in every town you conquered) and there are so many resources available you'll definitely won't run out.

There are two Seer quests that also require you to visit a KeyMaster Tent in order to get past the Border Guard that prevents access to the artifact that the Seer wants. You'll find the Bird of Perception at S1b that you take to S1a for Expert Eagle Eye, and you'll find the Ladybird of Luck at S2b that you take to S2a for 50 Griffins. There really is no need to get the Expert Eagle Eye as there are no heroes to learn spells from but the 50 Griffins are very valuable.

Once you have enough creatures, put them on your one or two best heroes and have them defeat the garrison troops and then flag the Griffin Towers. You'll need to go to the KeyMaster Tent at G3a to open the Border Guard at G3b to get access to three Griffin Cliffs. The battles shouldn't be very tough as your main hero(es) will have enough magic power to defeat most of the enemies by themselves without suffering much or any losses of their own troops.