Best Deals!
Yesterday, 19:54 by Pol (392 replies)
in Hall of the Heretics
MoM free on GoG till 2nd October
https://www.gog.com/en/game/master_of_magic_classic

Heroes of Might and...
Yesterday, 16:44 by MadMax (4 replies)
in Modcrafting Guild
I know you are all eager to have more information and details about the mod and we will be revealing...

MM7Rev4modR1 Redone
Yesterday, 12:27 by danielwest (112 replies)
in Might and Magic
The Game has been approved. The link is in the first post above. :-D
David
I am newbie and I am excited...

Modelling problems
Yesterday, 10:17 by Kinox (5 replies)
in Might and Magic
I have started doing some modelling in Blender, since there's an astounding lack of people doing it,...

Silence of Siren
Yesterday, 08:00 by Bugle (2 replies)
in News
This looks almost like it's just a skin on top of HoMMIII, I have to say, I am excited.
Just show me...

Favourite/Least favourite...
28.09, 16:07 by Tomsod (83 replies)
in Might and Magic
Barrows music is indeed the best music. Although my favorite MM7 location is actually the sewer. I...

The goal of this scenario is to capture the town of Terraneus which lies underground. Your heroes are limited to 6th level in this scenario and the 4 strongest will advance to the next scenario. You choices for starting bonus are: 14 Pikemen, 5 of each rare resource, or a First Aid Tent. 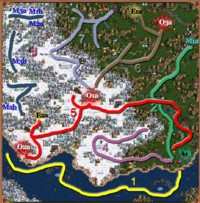 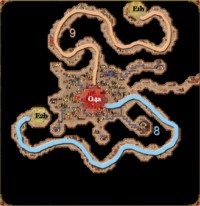 If you like using magic, then taking the resources as your starting bonus will be helpful in building higher level magic towers. If you're more combat oriented, take the Pikemen. I don't recommend taking the First Aid Tent since it didn't help me when I took it. Your hero starts out in the southeast corner surrounded by Pikemen and Archers. Don't worry as they will all join you for the greater glory.

Head to your castle (A1) and hire an extra hero to climb into a boat and explore the water along the yellow path. The water has a lot of wood and gold which will help you build and hire troops. There are a few possibilities to get artifacts so I recommend doing this on the first day.

I suggest upgrading all of the Archers to Marksmen (buy the building to do this), and then take the starting hero (Christian) along the green path. There are a few mines and places of learning up here, including a stone mine close to your castle that you should flag. At the very end of this path is a two-way portal (M1a) that leads to a snowy area in the northwest with unguarded artifacts. What I do is send up one or two heroes to M1a and have them retrieve the artifacts. Christian's troops are better used for capturing castles and since there are no wandering stacks, you can give these heroes a fast troop stack without fear of them being attacked. Another idea is to hire a Tower hero if one is available because they don't have any penalty when traveling on snow. Even if you want to just use Castle troops, you can dismiss the Tower hero(es) when you're done with them.

During this time that Christian and the other heroes are exploring you should get the Citadel and then the Castle for the increased troop production. Then build as many of the unupgraded troop buildings as possible before the first week is up. After all, you can always upgrade them later and quantity is more important than quality at this time. At the start of the second week hire a hero, buy him some creatures, and have him travel along the purple path. There are a few mines in this area along with a school, a wandering teacher, and some artifacts that are guarded by creatures. This area isn't essential but it does provide some good resources along with a gold mine. Artifacts don't carry over to the next scenario, so it might not be worth the trouble to get some of them. I definitely recommend flagging the gold mine even if you don't want to get the artifacts. Having extra income is important, even more so on other maps where you won't have the luxury of having four towns producing income.

At the start of the second week, Christian should have gone to some places of learning along the green path and then moved on to the red path in order to take the first castle. There are two enemy castles in this area (O1a and O2a), but they should be quite easily overtaken, especially if the hero(es) who explored along the blue path came back with some artifacts for Christian. Hire troops in O1a, give them to Christian, have him continue on the red path to take over O2a and any other opponent hero he sees on the way. Just leave a hero in each of the towns to defend them as well as building and upgrading so that you can get access to the upgraded troops.

If you see a hero, press option when your cursor is over them to get a rough idea of how many troops they have or use the Vision spell if you have it. If there are a lot of troops, stay in the castle because they are likely to attack it. If you build a Citadel or Castle, you will probably win because of the protection the walls provide. If the opponent hero has just a few troops, wait until they get close and attack them with Christian. You don't want them to wander around and flagging mines that belong to you.

Give Christian as many troops as you can muster and send him along the brown path and then take O3a over. If you have played quickly, they shouldn't have very many troops and their hero should be of lower ability as compared to Christian. If you'd like to upgrade any of your troops that you haven't been able to, there is a Hill Fort that lets you do that just northwest of O3a. With O3a taken, you can breathe a big sigh of relief because the opponent is now heavily crippled. You should only see one hero appear from either E1a or E2a with a sizeable force so be ready for that by continuing to build and hire troops in O1a and O1b as well as returning Christian to the general area to help out if necessary.

The next step is unnecessary but if you want to groom the four heroes you can take to the next level, there are many places of learning along the purple path including a colloseum and an acadamy. There is also a jail as indicated by the J on the map which has a hero with a sizeable army who will join you out of gratitude. You could also use this time to further build your towns to have a big force once you head underground. By this time, having enough coins and resources shouldn't be much of a problem. I like building mage towers in each town to get access to as many different spells as possible. Make your own decision about how much time, if any, you want to spend taking your heroes to these places of learning. Doing this will make future maps easier but if you like a challenge you can always head underground after conquering the surface.

One of the underground entrances is by the red path and is indicated by E2a and the other is by the brown path and is indicated by E1a. Pick two heroes, get all of the troops that you can, and divide them between both. Send on hero in E1a and the other in E2a so that they can defeat any opponent hero they happen to meet. You shouldn't meet any sizeable force and should arrive in the middle of this cavern with no losses but this tactic is to prevent any enemy heroes from reaching the surface where they could easily take over any undefended town. There are a few mines in the paths leading of from the central area, but they should not be important at this point.

Now put all of the troops on the hero of your choice and attack the last opponent town at O4a. Unfortunately, the ground is cursed so you can't use any magic spell above level 1. You should have so many troops that you should win easily; especially if you use level 1 spells such as Bless, Haste, Slow, or Shield at Expert level. There are no special tactics that you should use for this last fight. Just attack their ranged creatures with your flying and ranged troops and then attack the rest as they come over the castle walls while using your best level 1 spells. After you win, this scenario will be over.

If you are playing just for time, you can just rush the underground castle with your starting troops and you can probably pull off a victory in little more than a week. However, the later maps might be tougher if your heroes aren't built up enough.

Best Deals!
Yesterday, 19:54 by Pol (392 replies)
in Hall of the Heretics
MoM free on GoG till 2nd October
https://www.gog.com/en/game/master_of_magic_classic

Heroes of Might and...
Yesterday, 16:44 by MadMax (4 replies)
in Modcrafting Guild
I know you are all eager to have more information and details about the mod and we will be revealing...

MM7Rev4modR1 Redone
Yesterday, 12:27 by danielwest (112 replies)
in Might and Magic
The Game has been approved. The link is in the first post above. :-D
David
I am newbie and I am excited...

Modelling problems
Yesterday, 10:17 by Kinox (5 replies)
in Might and Magic
I have started doing some modelling in Blender, since there's an astounding lack of people doing it,...

Silence of Siren
Yesterday, 08:00 by Bugle (2 replies)
in News
This looks almost like it's just a skin on top of HoMMIII, I have to say, I am excited.
Just show me...

Favourite/Least favourite...
28.09, 16:07 by Tomsod (83 replies)
in Might and Magic
Barrows music is indeed the best music. Although my favorite MM7 location is actually the sewer. I...