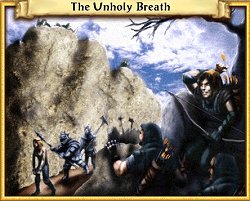 Speed is relatively important in this scenario. You can’t attack any of Purple’s towns or heroes until you jump through some hoops, but meanwhile Purple can upgrade its towns and accumulate troops. So, at the start of the mission, don’t waste any time going to buildings you don’t need to visit (like the nearby cemetery), and, as soon as necromancy gives you some extra troops, split them into a separate army so you can more quickly get through the underground level.

So immediately head west, flagging the ore pit and attacking the stack of cereberi. You should get some ghosts or vampires from the cereberi, so split them off and let them pick up stuff while Gauldoth flags and attacks stuff. Gauldoth should be around level 30 by now, so go ahead and let the secondary army pick up treasure chests. The gold will help you more than experience now. 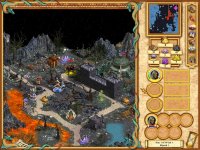 Even though you want to hurry, you should still explore as much of the underground part of the map as possible (some of it will be blocked off). Computer players don’t explore very well, and you might hold some of the resource buildings (like the gold mine) for most of the scenario. Plus, by killing the neutral stacks, you’ll deprive Purple of some experience and also gain some extra vampires and ghosts.

Note: Once you go through the portal leading to the surface, the portal will disappear, and Kalibarr will be allowed to explore the underground part of the map.

On the surface, even though the dragon portal you need to take is located to the west, head north instead. In that direction you’ll be able to snag a spawning pit, another gold mine, and more. But once that area is clear, head for the dragon portal and go through. If you’ve taken less than three weeks at this point, then you’re in good shape.

Note: The dragon portal is guarded by a quest gate that will only allow an army with Gauldoth to go through. So make sure you join your secondary army to Gauldoth’s army before going to the portal.

After you go through the portal, follow the path west. You’ll find a lightly defended and barely developed neutral Death town. Once you take the town, immediately hire an Order hero to increase the growth rates of your troops, and then use the hero as your secondary army, since it will be able to do more than imps (or whatever you were using before). Also, since you should have lots of money at this point, concentrate on constructing troop buildings rather than a city hall.

Then explore your half of the surface map. The three most important things you’ll find are: a temple of the damned (northern side), a dragon portal leading to the underground map (northeastern corner), and a quest hut (eastern side). Since the dragon portal is a one-way exit, explore everything first before going through, and in particular visit the quest hut so you can use the dock and receive Suraze (a level 27 General) plus vampires and a devil as reinforcements.

When you go back underground, immediately head south and capture the dragon graveyard so you can add some more bone dragons to your army. Then head east towards the areas you visited before. Along the way you can visit a quest hut at (55,53), but it will only net you 30 zombies.

Note: When you get to the part of the underground map where you were before, the trees blocking Nekorrum will disappear, and the hero there will be able to start exploring the surface.

Chances are that you’ll run into Kalibarr on the western side of the underground map. But regardless of whether you face him in the open or at a town, you definitely want to kill him first (he has tactics sills). So use hand of death or poison on him right away, and then use hand of death liberally in the battle while your vampires, devils, and bone dragons punish the enemy troops.

Once Kalibarr is dead, mop up the underground part of the map, and then head back to the surface. (If Kalibarr wasn’t in the underground Purple town, then it’s probably best to skip it.) The surface should be much easier than the underground, so just head straight for Nekorrum and either take it or blockade it until you can take it. Once Nekorrum is yours the scenario (and campaign) will end.