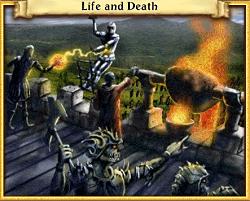 You don’t have any choice about where to go, so head west. The first neutral town you find is going to force a tough battle on you, so try to accumulate as many troops as possible before then. That is, when you pass the cemetery and barrow mound, recruit skeletons and ghosts there, even if you wouldn’t normally. Eventually you’ll come to a tree of knowledge guarded by some devils. If you have the hand of death spell, then put Gauldoth in an army by himself (so the devils are in one stack) and attack the devils. Two casts of hand of death should finish the battle. Then, if you’re far away from your next level, use the tree. Otherwise skip it for now, but remember to use it later after you level. 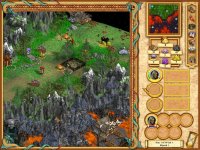 South of the tree of knowledge is a neutral Death town. But unlike most neutral towns you’ve encountered, this one won’t be a pushover. It’ll have bone dragons and vampires and more, but luckily all of the units will be melee units, and so they’ll stay behind the town walls until you provoke them. So take the time to cast spells on them (like mass curse and mass weakness), and then summon in some troops before heading for the gate or casting poison. If you still have trouble, kill the ice demons south of the town (for extra vampires) and then try again.

Once you’ve captured the town, you’ll find that your travel options are still limited, so head west, killing and flagging everything on the grassy (northern) part of the map. You’ll find a quest hut right next to your town, but you won’t be able to complete the quest for a while (and the dragon’s horde is to the south, not the east). You’ll also find a two-way portal along the northern edge of the map, but it’s only useful if you have the red command word. That is, it’ll be useful to Teal (the only enemy on the map) way before it’ll be useful to you, so leave the devils there to guard it.

When you’re ready to push into enemy territory, re-supply your army (if necessary) and then attack the Teal garrison to the west. The garrison will have a few devils plus hundreds of mummies and zombies. So use your favorite mass and summon spells, and then start raising vampires once enemy creatures start dying.

Beyond the garrison you’ll find a Teal town, which should be easy to take, plus assorted other buildings. Go ahead and create a sawmill from the wood pile and an ore pit from the ore deposit. If you use a trading post, then both resource buildings will produce 124 gold per day, and so they’ll pay for themselves in about 20 days.

You’ll also find another Teal garrison to the south. This one will have 40 venom spawn and 5 devils. Luckily, all the creatures are warm-blooded, so you should be able to handle them with your vampires plus poison and hand of death.

Follow the road past the second garrison and you’ll shortly come to the area where the dragon horde is (beyond a quest gate). You’ll have to kill six dragons to get to the Armor of Death. The best strategy seems to be to have Gauldoth and your vampires go in alone. Then have Gauldoth cast vampiric touch on himself and just hack away. Gauldoth and the vampires should be able to leech back whatever they lose to the dragons, and you shouldn’t take any losses in the battle.

Once the dragons are dead, grab the armor and head back to the quest hut near your first town. There isn’t any way to avoid backtracking to the quest hut, but you can use the trip to re-supply your army and add in (hopefully) a bunch of bone dragons. Then walk all the way back to where you were.

At this point, you just need to clear out the southern half of the map. Teal will have at least two more towns there, and you’ll have to do battle with another garrison, but otherwise everything is optional. So clear out what you want, and then go through the underground tunnel at (28,85).

Underground you’ll pass red and teal keymaster gates (that you can’t do anything about yet) and then you’ll come to a Teal town. Take the town so you can use it to ferry in troops, and then explore the area around the town. You’ll find the red keymaster tent at (78,47) (northwest of the town).

So head back to the red keymaster gate and go through. There will only be one way to go, and you’ll eventually come to Teal’s last town (behind a quest gate). Malvich will probably be waiting outside the town, but with all the other towns on the map (plus necromancy) behind you, you should have him severely outnumbered. And if you can cast hand of death to kill him right away, even better. Regardless, this is the last battle of the scenario, so don’t worry about conserving troops, and just let your troops beat Malvich’s army senseless. Once you defeat Malvich, the scenario will end.

Note: If you have problems in the last battle, you don’t have to blockade Malvich’s town. The quest gate will do that for you. So just keep ferrying in troops to Gauldoth’s army, and eventually you should be able to take out Malvich.