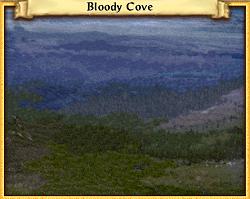 Note: Once again you'll play on a large map and have way more experience available than you can possibly use. So you might want to create a sorcerer hero for your main army, and leave Pete to lead a secondary army. 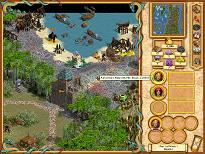 Right off the bat you'll have to make a decision: east or west. Both directions lead to about the same thing -- a town and a gold mine -- but the western direction also leads to a beastmaster's hut, a school of magic, and an experience shrine, so if you're planning on creating a sorcerer, that's the direction to take.

Regardless, grab the sulfur mine near where you start out, and then grab one of the two towns, plus the nearby sawmill and ore pit. Then rinse and repeat with the second town. Tawni should be able to do these battles on her own (or with a sorcerer), but if she has trouble then bring in Pete to help her out. Once the two towns are yours, take some time and thoroughly clean out the areas surrounding them. With troops from the two towns, Tawni should be able to capture the gold mines now (if she wasn't able to before).

Now you need to finish conquering your island, which extends all the way to the southern edge of the map. Purple will have two towns, and Green will have another town, but you don't need to capture them right away. If the towns are heavily guarded, then avoid them and just flag all the resource buildings and troop buildings around them. Eventually you should out-produce Purple and Green, in resources and troops. Then, by the time you finish exploring the island, you should be able to take the towns (if you can't take them right away).

Besides Purple and Green, you'll also find some other things on the island:

-- A green keymaster tent at (131,145). It'll allow you to use the yellow two-way portal on the island.-- A green dragon portal at (123,176). It'll take you to the island that forms Bloody Cove. You'll find a dragon cave, a sulfur mine, a neutral Chaos town, and more on the island, but you probably won't need any of it.-- A blue two-way portal at (36,120). The portal is blocked by an orange keymaster gate, so only Blue can use it for now. So just be wary that a Blue hero might pop out of the gate at any time, and try to keep the town nearby stocked with troops so you can give chase when the hero arrives.-- A quest gate at (121,208). It'll only let you pass after you've defeated Purple, Green, and Blue.

So once you've defeated Purple and Green (or at least Purple; Green might have a ship out in the ocean somewhere), re-supply your army and head to the shipyard along the southwestern coast of the island. Blue's island is located in the northwestern corner of the map, so sail north and then west to get to it.

Blue will have two towns, but since you should have at least five towns at this point, you should have the bigger army, not to mention the better heroes. So capture the towns and any resource buildings that interest you (like the sulfur mine on the sandbar between the two towns), and also visit the orange keymaster tent next to Blue's western town. Now you can use the blue two-way portal between your island and Blue's, but there isn't any reason to. You still have to sail all the way to the southwestern corner of the map so you can visit the purple keymaster tent.

Note: With the three computer players eliminated, you should start ferrying all of your troops to your most southern town (the one closest to the quest gate). Then it'll be easy to re-supply your army when you're ready to go through.

Once you have the purple command word, use the nearby purple dragon portal. It'll take you back to your island, just a little west of the quest gate. So re-supply your army, buy potions of immortality, and save your game (just in case your attack force isn't big enough to defeat Swift). Then go through the gate and sail north. You'll find an island with the blue keymaster tent, plus some dragons guarding it. Kill the dragons (your force should be powerful enough that they'll offer to flee), get the blue command word, and then continue sailing north.

Captain Swift will be level 18, and he'll have around 50 dragons with him, plus a mess of pirates, bandits, and evil eyes. As long as you have about as many dragons, you should win the battle because you should have lots of level two and level three units while Swift only has level one and level two units. This is also the last battle of the scenario, so just try to keep Pete and Tawni out of the way and let your troops do all the work. Once Swift's army is dead, you'll win the scenario.