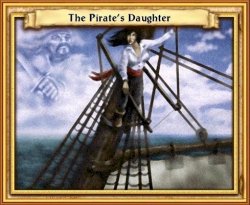 This campaign starts the player in the very unorthodox position of not having a town. You're on a tiny island with a sulfur mine amidst a few other items. You have two heroes, both from the stealthy side of the chaos spectrum. This means no magic right off the bat. Why the campaign designer elected to put a free level one chaos spell on the starting island is beyond me given that neither of your heroes can learn it. Visual effect?

The life span of the average Pirate would seem to be 3-4 game turns... at least initially. You'll be forced to fight several small battles on the island prior to embarking seaward. The mine, the useless spell shrine and the Seaman's Hat artifact all have their own stack of Pirates guarding them. You'll want to spend your own pirates since they're slower than the bandits you start with and are pretty much worthless once you get to dry land.

It will be advantageous to invest a few levels into your hero's combat skills (rather than Seamanship and Stealth) in order to make them more potent in battle. Consider hiring a mage as soon as you acquire your first town so you have access to magic. Keep in mind though that Pete and Tawni are the only ones you'll get to carry forward to the next mission so make them as tough as possible.

Important Note : Don't lose either of your starting heroes since to do so is an automatic loss of the scenario. In battle, put those pirates out front while your two heroes are lower level. Later when they get tougher and have access to Immortality potions you can be a bit more lax.

II. Goal Number One - Get to Mancebos ASAP 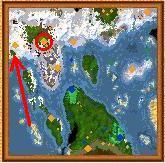 There is a ship moored on the island as your method of transportation elsewhere. Don't forget to visit the Window of the Magi prior to leaving. It will show you the first town you are to capture just by sailing north. This is NOT your first goal, however. Yes... it IS a necessary objective and you HAVE to go there first but I stress that your primary objective is the town circled in the figure to the right.

To your direct northwest there will be a Pirate Cove. Absolutely, positively DO NOT try and take it. The reason why is that it's guarded by a small number of mermaids. This doesn't seem like that big of a threat but their hypnotize ability is a great way to get your heroes killed and/or reduce your stacks below critical mass for the upcoming assault on Ishkandar, your first town.

On an island farther north, between your starting point and the neutral town is a Bandit habitat you'll need for additional reinforcements. The Seaman's Hat will help you stop and go much faster from that island but that should be the only landfall you make on your way north. There is a decent quantity of flotsam scattered about but don't let that distract you. The enemy has towns and is building an army while your out playing with your boat. Head due north and make landfall. The faster you get your town and get building, the better off you'll be.

Once Ishkandar is taken you'll need to tech/build up ever so slightly. The first time I attempted this scenario I waited until I had Black Dragons before going on the offensive and it was a mistake. The enemy was building at the three Stronghold towns to the direct east which ultimately became overwhelming. You need to go at the nearest enemy town, Mancebos to the east as soon as you have built your Efreet habitat. Hire the two effreets that come with the building and anything else available and GO immediately. If you're quick enough, you should catch the enemy at a very low strength. You'll take some casualties in the battle but the enemies power base will be greatly weakened once this is done.

III. Goal Number Two - The Rest of the Northern Continent 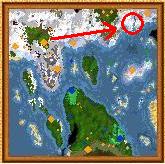 You'll want to start cleaning up the territories surrounding your initial two towns when you get the chance. A secondary hero with a small to medium army should be able to accomplish this nicely. A gold mine in the north west corner and a mercury mine in the central northern sector are two very important objectives.

Your primary hero group should be sweeping right across the map in effort to take the towns of Hortus and Zija. When I got to Hortus it was still under neutral control. I had to delay taking Zija though because of a nice big stack of Cyclops's just passed the bridge you see circled. If you see something similar don't delay too long since the enemy has access to the sea and will have taken Zija by the time you get there.

When I finally got through to hit Green at Zija, I had to call in heavy reinforcements as he had about 40 odd Thunderbirds amidst other big stacks. I brought in 75 T-birds of my own and smashed him in one of the most colossal battles I've ever fought. This pretty much broke the enemy's back which helped me jump into the sea. 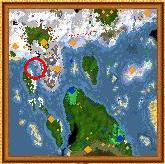 Note the sea chain you see in the map to the right. This is something that you can get away with never opening. If you do so it will allow the enemy sea access to your primary town which is not strategically sound at all.

Most of the time you spend building up your three Stronghold towns will have your main hero group stopping sea incursions in the central and eastern coast areas. There will be plenty of empty enemy boats for you to nab which makes the chain an advantage for you rather than a hindrance to your progress.

Your three Stronghold towns will be your primary army suppliers throughout the game. I teched up to Thunderbirds in my first two Strongholds long before I build the Black Dragon structure. 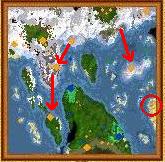 Once your shoreline is secure you can send a big army to wrestle the sea away from the enemy. You'll want to keep a roving defense force near the central or eastern coastline for the frequent landfalls the blue or green players will make.

The orange tent (circled) is located on a southeastern isle amidst some other small goodies. This should be hit once you've secured the bulk of the sea towns outside blue's mainland. This will allow you to gain access to your objective city of Yanathrae.

Be wary of the one way gate outside of Wataga. If you don't capture Frigiston first you'll likely see enemy heroes pop out and swipe Wataga right back from you.

Once you control the seas Green should be near elimination and Blue will become anemic. 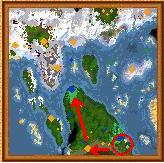 The circle on the southeastern coast of Blue's continent is your entry point. There is no other way to get on this land mass so go there and have your orange keys handy. You should be able to sweep west to Split Elm and then north to Yanathrae fairly easily. The size of your final battle will vary depending on how many of blue's armies you caught in the field prior to assaulting his capital. Once you take Yanathrae, the scenario is over and you're ready to advance to the next one.

I played this campaign on the very center difficulty setting. The AI bug came into play with the Green player never touching the like colored tent near Frigiston. When I arrived there it still had it's initial stack of defending Ogres in front of it. If the computer had taken this objective it would have given him instant access to either Ishkandar or Ziga via a lavender gate and the scenario becomes much harder. 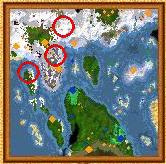 Given all the Stronghold towns a player will have access to, it's a good idea to bolster production in those towns by hiring a few heroes with Nobility. Level them up to Advanced or Expert in the skill by attacking some of the random creatures that sprout up. This added production is necessary if you are to deal with some of the big enemy armies that will be crawling around.

With so many Thunderbirds growing you'll have a huge demand for mercury. Make sure and take (and hold) the three mercury mines circled on the map. You'll have moderately easy access to all of them but may lose them from time to time against raiding computer players.

Even following the instructions in this guide the first Chaos Campaign mission is hard. I reiterate how important taking Mancebos as quickly as possible is. You know very well that every town you take from the enemy is that many more units for you and that many less for him,

so be vigilant with your attacking, especially early on. Mancebos is your springboard to the rest of the scenario. Stumble there and you might as well start over.