Underrated game
3 minutes ago by Belcanzor (5 replies)
in King's Bounty
I understand now.
Well , I cant judge, sometimes I go out for 3 or 4 years and come back.
After play...

CH →
Walkthroughs →
A Pirate's Daughter → The Strait of the Lost
﻿

A Pirate's Daughter → The Strait of the Lost 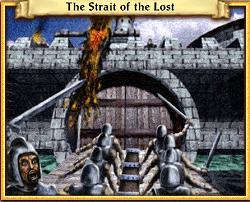 Note: As of version 1.2, this scenario is either badly designed or slightly broken, take your pick. The story triggers assume that you're going to sail south and make landfall there, but there are holes in the reefs allowing you to land anywhere you want, including right next to Rumport. Since there is a quest gate blocking land access to Rumport, and since you can avoid that gate, you can keep Rumport perfectly safe for the entire scenario. Moreover, sailing through the reefs allows you to rush Blue and defeat it pretty easily. So I'm going to write the walkthrough as if the reefs actually block passage, but feel free to sail directly to Rumport and have a much easier time. 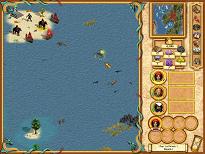 You'll start out with three armies and three ships, which is pretty suggestive. So put each army into a ship, but have one of them visit the Window of the Magi first. You'll be shown Rumport and the place where the scenario thinks you're going to make landfall. Then have Tawni sail east to kill the sea monsters before heading south to make a landing, and have Pete and the other army explore the sea and the surrounding islands. You'll find a few stacks of Red-flagged mermaids in the area. Pete should be able to kill them on his own.

Note: There's a scouting altar on an island to the southwest. You might want to have Tawni visit the altar before heading to the main island. If you land her ship just north of the healing potion, she can visit the altar and return to the ship in one turn.

Once you get Tawni to the main island, have her visit the mercenary camp, the tactics altar, and the gold mine before arriving at the quest gate. Then send her through the gate and to the city. You'll find some cyclopes blocking the way, but Tawni should be able to kill them and capture Rumport all on her own. Meanwhile, once the sea is clear of debris, send the pirate army south to follow behind Tawni and pick things up. Pete will probably take a while to clear the islands, but that's ok. (It's not like you want to build him up any more anyway.)

Then explore the area around Rumport, both inside and outside the gate. To the north you'll find a Window of the Magi, and it'll show you the prison where Cyrca is being held. But what the Window doesn't show is that the way is blocked by a red keymaster gate, and so you can't get there until you visit the red keymaster tent, which is located in Green's part of the island to the south.

Even though you need to invade Green's territory, it's probably best not to do that right away. Instead, have Tawni explore to the east where you'll find a sulfur mine and an imp pit, and then, as soon as you have your first dragon, build a shipyard and have Tawni sail west to Blue's island. If you can knock out Blue early, the scenario will be much easier. Also, once Pete is done exploring the islands to the north, send him to the main island and have him explore on his own. He should be able to defeat most of the neutral stacks on the map, and so he'll be able to nab you some resource buildings and troop buildings while you're busy elsewhere.

Note: There are four underground areas on the map. Three are small treasure areas, and the fourth connects the main island to Blue's island. The treasures are pretty good, so explore any underground tunnels you find.

Once Tawni lands on Blue's island, put a low-level troop back into the boat and let it explore the western ocean. (The ocean is so big you might want to create another boat at Rumport so a second low-level troop can help out.) Then attack Blue's starting town (located on the northern end of the island). Chances are that Blue's armies will be spread out all over the place, and the town will be lightly guarded. But even if it isn't, Tawni should be powerful enough to turn the tide in your favor.

While underground, Tawni will eventually come to an intersection. The northern passage will lead to the tunnel entrance next to Rumport, while the eastern passage will lead to Green's lands. So take the northern passage first so you can re-supply your army (and hopefully add several dragons), and then go down the eastern passage. Meanwhile, send Pete into the western ocean so he can hunt down the Red-flagged mermaids there (including the stack past the whirlpool). There are four stacks of mermaids beyond the blue keymaster gate south of Rumport, so just check the thieves guild menu option every time Pete makes a kill, and when you see Red only has four armies left, you'll know that Pete has done all he can.

When Tawni arrives in Green's lands, send her north. You should find the red keymaster tent being guarded by a few dragons, and you should also find a Green garrison. So defeat the dragons, visit the tent, and then defeat the garrison. Now you can finally free Cyrca from prison, so head towards the red ôcrossö in the middle of the island, and then take the eastern branch.

You'll have to defeat some more dragons to get to the prison, but once you free Cyrca you'll find that she's a level 15 Fireguard. You'll also find a dragon cave nearby. Won't you won't find is a hint about what you're supposed to do next -- or even why you rescued Cyrca. But that's ok. Cyrca needs some experience, so go ahead and clear out the northern half of the island. There will be two towns there, and Green will own at least one of them, so between those and the neutral stacks of creatures, you should have a few good battles to help Cyrca along.

Once the northern part of the island is clear, re-supply your army and use the dock to jump back to Blue's island. Go through both quest gates (unless you did one before) so you can visit the blue keymaster tent and pick up the Giant Slayer Sword. The thunderbirds and behemoths guarding them shouldn't pose much of a problem at this point. Then jump back to the main island.

At this point you can kill some time if you want, and attack Green until Cyrca reaches level 23. But when you're ready to move on, put your main army on a boat and have it visit the blue keymaster gate south of Rumport. Past the gate you'll find two stacks of Red-flagged mermaids plus an island with a red two-way portal on it. So kill the mermaids and then land on the island so you can take the portal.

Through the portal you'll find yourself on another island, and this one will have a golden oracle and a shipyard. Visit the oracle to learn the location of the grail (nearby), and then dig it up. But before heading back to Rumport, buy a ship at the shipyard and kill the two stacks of Red-flagged mermaids nearby. Then when you return to Rumport and build the Eye of Chaos, you'll learn that you have a new objective -- to kill the Red-flagged mermaids -- which you've already done. So the scenario should end.

Underrated game
3 minutes ago by Belcanzor (5 replies)
in King's Bounty
I understand now.
Well , I cant judge, sometimes I go out for 3 or 4 years and come back.
After play...