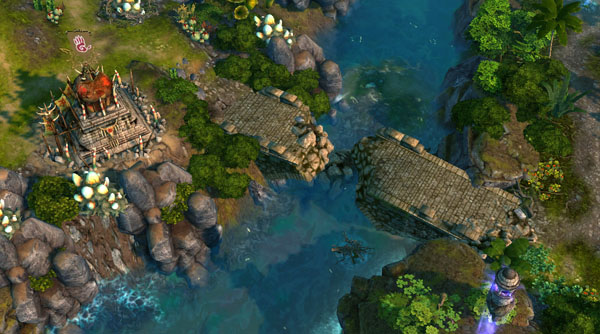 Finally, you can upgrade units; but you have to earn them one by one. This mission has a very unique design - you will only have one town from the beginning to the end, while your opponent has zero. You do not grow powerful by building up your only town. Somehow, the walls still don't give any growth bonus!

Instead, Sandor recruits his army by gathering a large number friendly stacks on the map. There is actually a quest that requires you to collect 40 stacks, but in reality you can pick up even more! It does not have to be Sandor to do the recruit. So hire your secondary heroes and send them out in multiple directions!

While Sandor's army expands like a balloon, you will have plenty of frustration. The script spawns a seemingly endless stream of weak invasions. You won't have any problem to win perfect victories against them, but they just keep showing up when Sandor is busy far away. The mission won't end until the scripted invasions run out. Once you defeat that last hero, the mission is won. 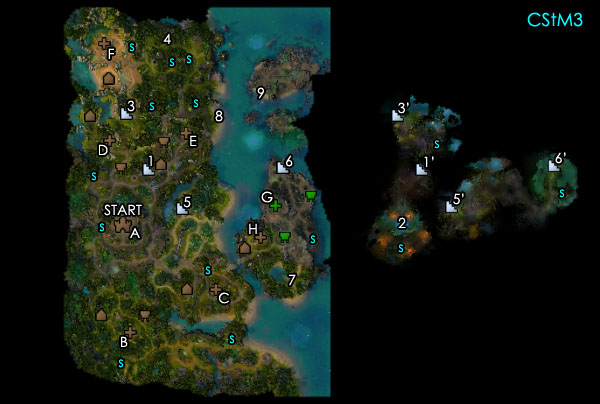 Stronghold Campaign Mission 3
Level cap: 24
Difficulty Index: 2/6
Last updated: December 26, 2011 (v1.2)
Dynasty Trait: Growth bonus does not matter here. The +3 movement trait is definitely great, while you can opt for some battle-oriented trait. I doubt whether the Hunter trait (+50% movement while seeing an enemy hero, Gold rank) works here. First free generic hero will help at the beginning, too. 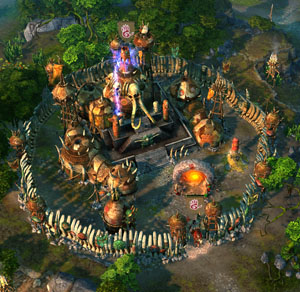 Sandor starts the mission with a fight against a familiar Sanctuary hero. The fight is not particularly difficult - but to keep a perfect record, it is better NOT to deploy the Cyclops. It is really hard to heal them (as their actual health does not decrease until their turn comes up). Even if you win this fight without any loss, Sandor will continue the mission with a lot less units. No worries though, he will soon get that number back.

Let's discuss the general strategy of the mission. The Sanctuary AI will keep spawning heroes to invade you randomly through one of the whirlpools on the sea. My end-game record shows that I fought a total of 16 heroes. The invasion comes almost every week, although in some weeks there could be 2, even 3 waves.

The invasions are largely unpredictable. Your top priority is to gather the free units. Send your secondary heroes in different directions so you can speed up Sandor's growth. This mission can be really a breeze if you can quickly pick up a lot of units. When you have enough crystals or resources to trade for crystals, build an Advanced Town Portal in Town A. This will make your life a lot easier. Later, you can also build a Warpath Lodge in Town A, which should speed up Sandor's advance by quite a bit.

There are four general directions you can go from Town A. The north is more difficult than the south, so it is better to send Sandor to the south, while letting a secondary hero pick up the north route's free units. Whenever you reach a Red Stronghold fort, you will be able to unlock one of the upgraded units, and the fort joins you automatically. Here comes the list of creature upgrades and their locations:

After you unlock the creatures from Fort B and Fort C and collect the creatures in these two areas, you should be powerful enough to go north. You can unlock Dreamwalker - Dreamreaver by going down the stairs at (1-1'), and talk to the Dreamreaver at (2) (no Fort involved). Before you leave this small underground area, there is a stat boost (s) south of the pool. 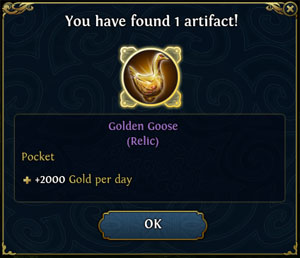 Break through the undead border garrisons, unlock the creatures at Fort D and Fort E. There is another small isolated underground area accessible from stairs (3-3'). Continue north to claim Fort F. Collect all friendly stacks in these areas as well. In my game, three Sanctuary heroes spawned right after Sandor claimed Fort F.

East of Fort F you can pick up a rare "Golden Egg" at (4), which after a few weeks will hatch into a Golden Goose that yields 2000 gold per day. You can leave the hatching job to a secondary hero - just keep the egg in the hero's pocket for warmth. There is an artifact merchant east of the Golden Egg.

After defeating the next wave of invasions, you have several precious days to claim the last upgrade. Get down the stairs at (5-5') and follow the underground passage east. You should receive a quest from Sandor's mother. Return to the surface with the stairs at (6-6'). Follow path south, and you should see a Necro fort. (This guy is the boss of Sanctuary mission 3.) Now they are actually your ally, and you can't do anything to them. They don't do anything at all, either.

Is it my eyes or... the tent on the left needs a bigger texture file.
Keep going south then west so you can claim the last Fort - Fort H. Finally you have all seven upgrades! To complete Sandor's mother's quest, go east from Fort H and turn south to (7). Give the quest item to the Sea Dragon "Hai Ryou" (which is exactly "Sea Dragon" in Japanese), and use any hero to talk to Sandor's mother in front of Fort H. Done! If you want to earn Blood points, though, you fight the Sea Dragon instead. Either way, you get a Tear of Asha for your (lack of) effort. 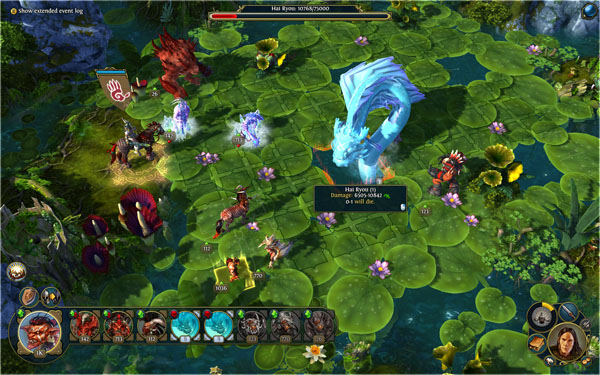 How did the Sea Dragon come to this inland lake? There are actually two achievements associated with this Sea Dragon. You need to defeat it in 10 turns, and defeat it for "slaying a dragon".

The sea dragon only has 75000 HP. Its special attack freezes stacks, but is not particularly powerful. Since you have collected hundreds of units in each stack, this fight should be over very quickly. There is not really any strategy involved. Put on your Arache or cast Mass Life Drain and hack away! 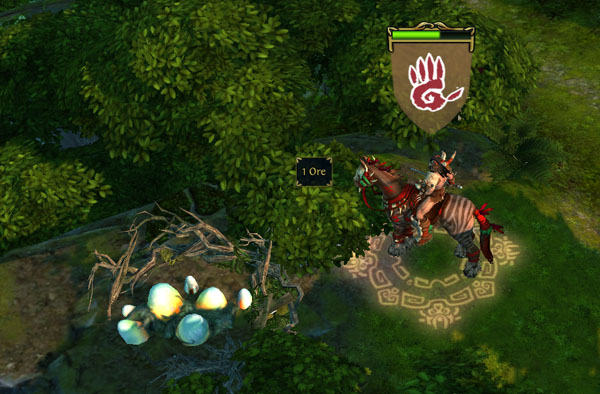 Too much time and nothing to do... how about tracking down a hidden Ore under the bush?
Or sailing on the rocks? 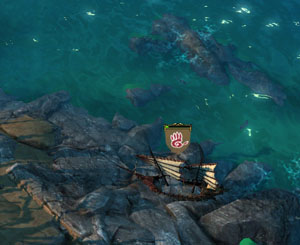 By now you have probably completed all quests except for the primary - to defend Town A. There should be a few more heroes on their way, so you can take some time visiting missed stat boosts.

There is a shipyard at (8), where you can build ships to pick up resources from the sea, and fight some more enemies on the island at (9). I thought the mission boss was on this island. But there are not many interesting things on the island.

When the last invasion finally arrives, the game will assign you a new quest - the boss is the same hero, whom you fought at the beginning of the mission. In my game, the last invasion came at the beginning of Month 3, right after I cleared the last neutral creature on the map. I hope clearing neutral creatures is not necessary, as tracking down every boring stack guarding nothing important in the middle of nowhere is really sleep inducing. Well, the final invasion is not really more exciting... but thank father sky and mother earth it is over! (Unfortunately, the same feeling will come back in the next mission.)