Might & Magic: Heroes VI → Stronghold → A Wormful of Demons

You must have been waiting for the battle from the loading screen! But we have some work to do first - how about gathering 500 Blood Crystals? Sounds like it will take forever... it probably will. 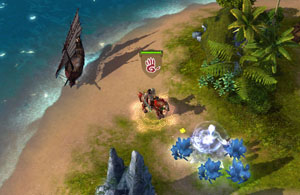 You can accelerate the process by flagging as many crystal mines as you can (6 mines in total), collecting/buying the artifact Crystal Eyeglasses (+1 crystal per day, 2 on the map, I found one in the Advanced Market), and of course trade Wood and Ore for Crystals at the best exchange rate. Soon after you accumulate 500 crystals, the way to the boss will be force opened. However, it is probably your best interest NOT to rush to this day too early.

The AI again one-way portals heroes to you right inside your home territory. This time, they arrive through two pairs of one-way portals as well as Inferno Gates. Like before, you can stop the invasions from the portals by taking the Towns that controls the portals' entrance. You can also stop the invasions from the gates by paying 10 crystals to close the gate before an invasion takes place.

In general, this is a very easy mission - a mission 4 with mission 2 enemies. So don't feel too much pressure. Enjoy the life of a hoarder! 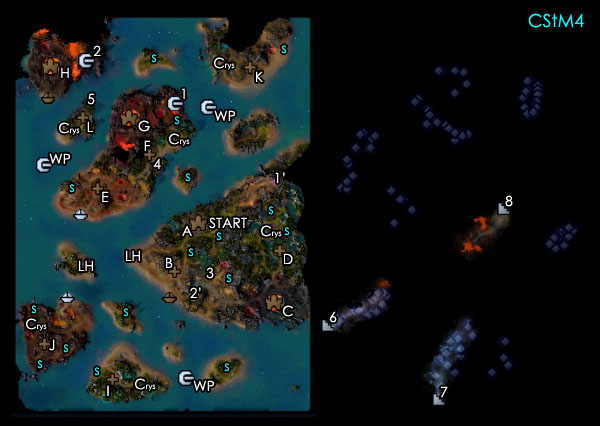 Dynasty Traits: Again you don't need any economic bonus except for free first generic hero (pick a Might hero for +1 Wood and Ore per day - buy one more anyway). The +3 movement bonus is great, too. If you have the third trait slot available, consider a crystal-related trait such as Merchant (better market exchange rate for crystals, maybe you can achieve 1-to-1 exchange rate from Wood and Ore?) or Perfectionist (buildings uses 1 less crystal). 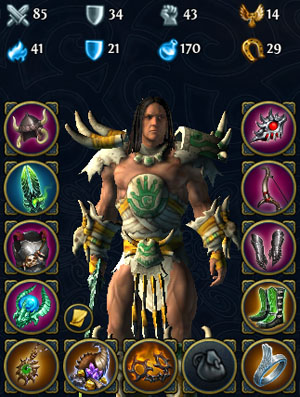 Sandor starts the mission with a very well protected Town A on the biggest island. Don't worry about saving crystals early on - the top priority is always to develop and expand. Flag the buildings nearby (the Sawmill and Ore Pit is to the south and east).

If you go all the way east, you can see the exit of the first pair of one-way portal (1'). One way to delay the demon invasion is to pick up all resources around the exit of the portal as quickly as possible, so any weak AI's hero won't accidentally step over to collect resources (and awkwardly can't go back). When I picked up the resources immediately, I never had any invasion coming this way. However, if I left resources beside (1'), I saw an "invasion" almost immediately. But still, it is a good idea to build an Advanced Town Portal in Town A as soon as possible.

Your side kick hero starts the mission on the sea north of Town A. Let her sail southwest first and flag a pair of Light Houses (LH) - you might need Sandor's help to flag the one on the main island. Ship the side kick hero's units to Sandor so she can explore faster. There are three Whirlpools (WP) on the sea. Entering one will randomly transfer your hero to one of the other two Whirlpools. There is no enemy hero on the sea - the exploring team is completely safe.

Note: If you hire a generic Might hero and fully load him up with Realm abilities, you should be able to see resources still hidden by the fog of war. This provides valuable scouting information about where islands are, as well as where to go to collect unguarded floating resources. 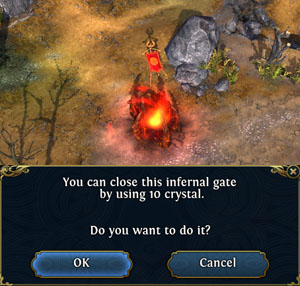 Head southwest to take over Fort B from the Inferno player. To the east you can see the exit of the second one-way portal pair (2'). Unfortunately, if the AI decides to come from this portal, they can take Fort B on the same day, and you will have to convert the local creature building back to Stronghold. In my game, there was only one (very weak) invasion coming this way (during the second month).

When you feel powerful enough, break into the Necropolis vault at (3) to receive 50 crystals - WOW! These crystals actually serve an important purpose early on. Around the 3rd week or so, you should beginning to have an Inferno Gate popping up in your territory at the beginning of a turn. The game will show you exactly where the gate is, so there is no way you can miss it (unless you went for a washroom break after hitting end turn).

If you ignore the gate, I guess eventually the invasion will come. There is a very simple way to close those gates - march any hero to the gate and pay 10 crystals. In my game, I almost always reach the gates on the second day after its appearance, and there was never any invasion. There is one new gate about every week. The lump sum 50 crystals from the vault (3) will make sure you don't run out of crystals for some time. 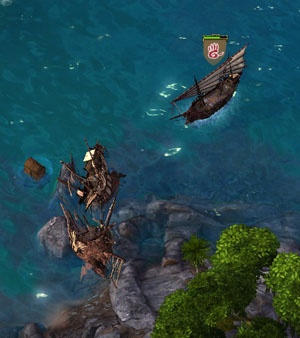 Now let's unite all towns and forts from the main island. Sandor's next target is Town C to the east, and then Fort D to the north. Both should be very easy. North of Fort D is the first crystal mine (Crys) in this mission. There are five more. The Arena there could be a little too tough, but you can always come back later for it.

Whenever the main island is safe, you can send Sandor on the sea to conquer some Inferno towns and forts. Your first target should be the island to the northwest, with Fort E, Fort F, and Town G. Why? First, there are 50 more crystals to be collected from a ruin southwest of Fort F at (4). Second, by controlling Fort G, you also permanently stop potential invasion from the first pair of one-way portal from (1-1'). These fights should be quite easy.

If you feel adventurous, you can try to put the end to the invasion from the second pair of one-way portal. The entrance of that portal is at (2), to the very northwest end of the map, beside Town H. Before you get to Town H, you can complete the only secondary quest - the "sunk" ship is located at (5).

If you find Town H too hard, simply come back later. There are lots of islands to conquer and to flag crystal mines in the meantime. Southwest of the main island you can take over Fort I and Fort J. Each of the islands contains a crystal mine. To the northeast corner of the map lies Fort K, where you can flag another crystal mine. Just south of Town H is Fort L - yes, another crystal mine. None of the forts are heavily guarded. This is another mission 4 with mission 2 enemies! 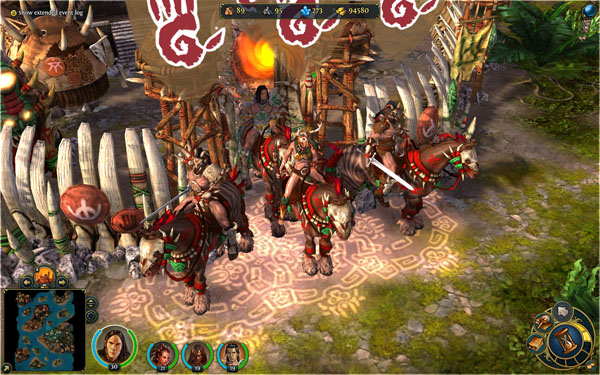 Sandor: "What do you mean there is nothing left to do... Go out and reveal the fog of wars at the corners!
Eventually, you will have killed and collected everything. The Orange inferno cease to exist, and all demon gates are promptly closed. There is nothing else you can do but to wait. In my game, I did everything I could in the middle of Month 2. Fortunately, I only idled for a few days before the next interesting thing happened. 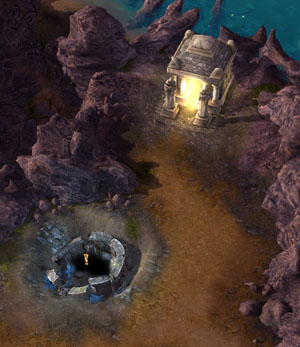 When your crystal count reaches a certain point (roughly 300), your crystal mines will collapse one after the other, starting from the one north of Fort J. The collapsed mine serves as a stairs, leading to a narrow, dead-end underground passage. The first passage north of Fort J leads to (6). You can pick up about 20 crystals from the passage (there are no enemies in these passages). The next crystal mine to go is the one east of Fort I. This leads to the underground passage at (7).

In my game, I accumulated 500 crystals right after the second mine collapsed. I guess if you don't have enough crystals, the game will continue to collpase the mines until all six are gone. The map above shows the resource indicators of the underground area - more passages and crystals are certainly there.

When you finally have enough crystals, the final passage leading to the boss will open - in a place you least expect (and least prefer). That's why you don't want this day to come too early. Load up everything you have, let Sandor visit as many battle boost as he can, bring another hero, and get down there! The final boss is at the end of the central passage (8). The use of the secondary hero is to remove the nasty tiny neutral stack just before the final boss, so Sandor gets too keep all his one-time battle boosts. 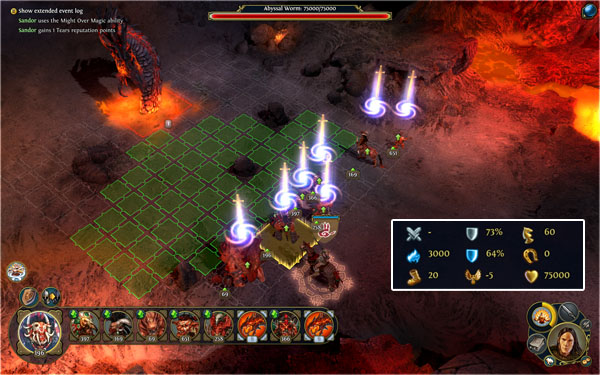 Hm, yet another boss with 75000 HP. The worm behaves like a chicken - it escapes to a seemingly random place whenever you melee attack him (but the retaliation will still deliver). It uses fire-based magic attack. You can greatly reduce the damage with the Tear ultimate "Might over Magic". Otherwise just slap Mass Life Drain (or equip Arache), your best attack buff and hack away! If you feel naughty, you can cast Weakness on the boss to cut the damage by half. Anyway, the boss should go down quickly.

That's the end of the Stronghold campaign! If you have followed the default campaign order from left to right like me, congratulations on your To the Bitter End achievement. See you in the Epilogue!