Might & Magic: Heroes VI → Haven → A Battle Lost and Won

You can tell that Blackhole wants to make this final mission more challenging, but unfortunately it does not quite deliver the thrill. You are up against two Inferno enemies, one on the surface and one below. Only the faction on the surface will invade you. The map maker did AI a favor - the invasions will come right to you through a one-way portal, the exit of which is in the dead center of your quarter. Unfortunately, you won't be able to stop the nuisance for a while. The invasions are too small to become a threat anyway.

Once you start pushing into the Infernos' territory during the intermissions, you will find out that most AI towns don't even have walls, and they are again garrisoned by mysteriously small armies. You easily expand and expand, while teleporting back to swat red flies from time to time. Standing out from the mundane works are two mini-bosses (one is optional, probably unintentional as well) and the (finally) action-packed final boss fight.

Dynasty Traits: From hindsight, this is a mission where extra movement points really help - so you can accomplish more while the AI is not invading you, and reliably catch the invading enemy heroes when they try to run away from Anton. The +3 movement bonus is a nice one. Free first generic hero always helps (hire a Might hero so you get +1 Wood and Ore per day right from the beginning. Wood will be short early on.). 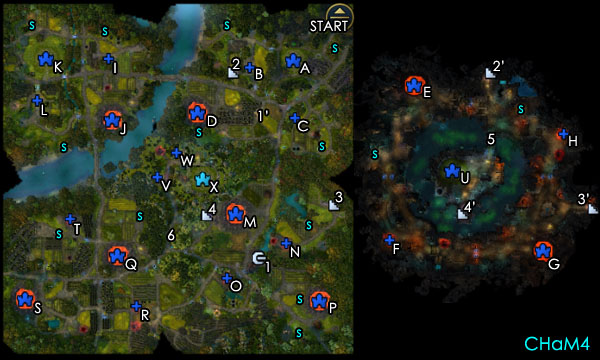 Haven Campaign Mission 4
Level cap: 30
Difficulty Index: 2/6
Last updated: November 25, 2011
You start in the northeast corner with the same side-kick hero from mission 3. You can dump to her the Regent's artifact set like before - you already have 4, and you will be find 2 more here to complete the set. MINOR BUG (v1.1.1): If you ended mission 3 with some set artifacts NOT in the first three rows of your artifact slot, you are temporarily unable to access them until you acquire enough artifacts to give you back the scroll bar to see the 4th row and below. When this happened to me, I could go back to the last save of the last mission, move up the set artifacts, and finish that mission again. Another artifact set that you might be able to complete here is the Prophet set. However, in my game, I left one piece of it in a secondary hero when a previous mission finished. It was lost forever. 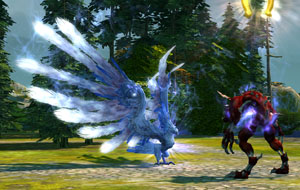 Go southeast to take over Town A. Like mission 3, it is a good idea to focus on money buildings first. Flag and collect the resources nearby. While you don't have a good army yet, the free Summon Phoenix spell carried over from mission 3 can make things really easy. While the neutral creatures focus their attack on the summoned Phoenix, you can use Anton's regular attack to wear them down.

Soon you will discover the exit of the one-way portal (1'), where the surface Inferno faction conveniently invades you about every two weeks. The entrance of the portal is south from here at (1). However, even if you secure that area later, the invasion will continue. The AI hero will simply walk to you the old-fashioned way.

Grab Fort B and the crystal mine, as well as Fort C and its creature building. There should be some friendly creatures for recruit. Besides, many of the Ruins/Barbarian Camp structures in this scenario give free units, even upgraded Haven units. Next, go west and take over the Inferno Town D and convert it. Part of the main quest is to convert 4 designated Inferno towns, and this is one of them. Now you have your quarter established; the only threat to your home base comes from the one-way portal at (1'). You can build an Advanced Town Portal in Town A ready when Anton goes somewhere far away. 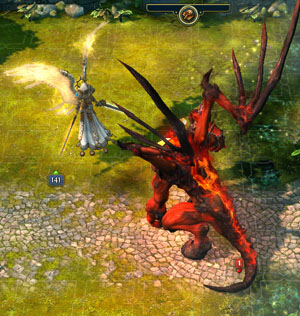 Now you have some freedom to decide where to expand next. If you take the stairs (2-2') down, you can fight the other (orange) Inferno faction, which owns a total of two towns and two forts. You can also push out west or south. By going west, you can grab two towns and two forts, in addition to completing a side quest to receive a group of reinforcements. By going south, you can eventually grab many towns, many forts, and finally put a stop to the demon invasions. Of course, the south is likely too tough for you now.

Let's start with the easiest and most profitable. The underground orange demons have nothing to do with the surface demons. They don't actively invade you early on probably because they are simply too weak. So let's wipe them out and use their resources and towns to fuel our rapid expansion. Once you are in underground (2'), travel west first so you can immediately take Town E for conversion. The underground quest requires you to convert two towns.

From Town E, you can go counter-clockwise to sweep Fort F, Town G, and Fort H in rapid succession. If the red Inferno invasion comes on the surface, simply portal back to the surface. The invading heroes have a tendency to flag Fort B (if you lose it, there is no point to waste the resources to convert it back to Haven.) Since Fort B is close to the stairs (2-2'), it actually makes your return to the underground faster. In my game, the next invasion came right after I took Town E, so I continued my next expansion clockwise from (2') and worked on Fort H, Town G, and finally Fort F. They are all very easy fights. the Arena fight is probably the most difficult before the mini-boss. 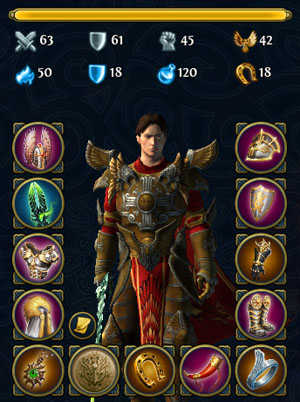 Besides stairs (2-2'), there are two additional sets of stairs, (3-3') and (4-4'). The AI will not use these stairs, which don't lead to any valuable artifacts, or bypass any tough enemies. After wiping out the orange demons, the barrier (5) to the middle area is lifted. But you don't want to challenge the mini-boss in front of Town U yet - it is intended for later. Since this is a stationary mini-boss who doesn't care about town management (why hold onto the Tear of Asha when you can easily install it in the neutral town one step away?), she doesn't mind if you flag the gold mine and crystal mine right in front of her. Neat!

Now you have the underground secured, and your army grows a lot every week. It is time to beat down the red demons. I suggest that you go west first, since the demons there are also unimpressive. Cross the bridge west of Fort B and take whatever stands in your way. There could be a roaming hero around, but you should be able to crush it easily. Sweep Fort I, Town J, Town K, and Fort L. Town K joins automatically as part of the side quest's reward.

By the time you convert your second designated Inferno town on the surface, Anton's Great Aunt shows up. As Anton's ally, Sveltana is scripted to attack the southeast Town P no matter who owns it. (So it is possible that she takes it from you, if you opt to go south first.) While you think this may put an end to the demon invasion through the portal, the AI will access it from Town M. So she doesn't really help very much. Sveltana will remain dormant in front of Town P, slowly building it up, but not doing anything else. You can actually attack her and enjoy her town when you are powerful enough.

Let's charge right into the red demons' heart land. Go south from Town A and easily conquer Town M. Now you have basically secured the portal entrance at (1), although the AI will still invade you from the west. Grab Fort N and Fort O nearby. Now you should be powerful enough to... borrow your Great Aunt's Town P. This fight could be a little tough (as Arache's Life Drain does not work on undead). However, since you can heal effectively with Guardian Angels lv 4, it is still possible to score a perfect victory. 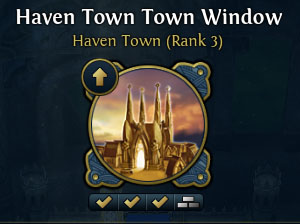 Just one more bunch of Inferno towns to crush. March west and take Town Q, Fort R, Town S, and Fort T all together. They are all push-overs. In my game, there is an Emerald Yumi Bow to be picked up in this southwest area. However, none of your subsequent tough battles require you to shoot over a wall, so it is probably better to stay with the Lion's Shield and enjoy the set bonus.

You are now ready to tackle the bosses of the mission. The underground boss in front of Town U is easier, so let's do that first. She is even less powerful than the optional boss back in mission 2, so you should be able to crush her like a bug by now. You get a free Tear of Asha and a... "Haven Town" (what a generic name) from this mini-boss fight. Install the Tear back in your Capital and let the population explode! For your effort, you also receive a Dynasty Weapon Angelic Alliance, a healing Might weapon. It might automatically replace your Arache.

BUG ALERT: To prevent Angelic Alliance from disappearing, it is a good idea to save the game, go back to main menu, and associate this new weapon with a hero in My Dynasty. Under v1.1.1, there is another bug that permanently gives bonuses associated with a currently-equipped Dynasty Weapon whenever you save the game, load the game, and switch to a new Dynasty Weapon. You might not be able to avoid this bug all together, but you can still restrict yourself not to abuse it.

Now we are ready for the campaign's last fight! Make Anton visit all stat boosts (s) you have missed, load him up with all your best untis (let Seraphs in and don't split the Vestals) and walk up the path starting at (6). Break through the easy Fort V and Fort W and receive the last piece of the Guardian's artifact set. Here comes the boss in front of Town X, Falcon Reach! 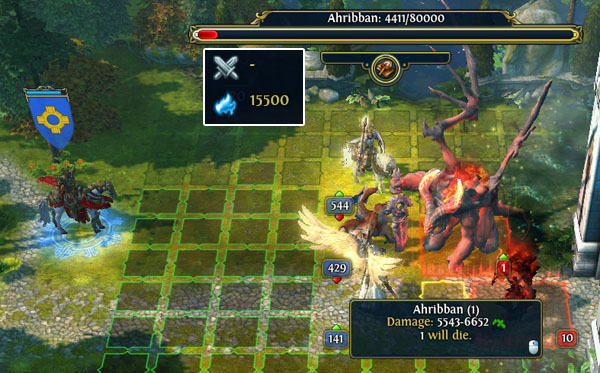 Ahribban, the demon Prince of Hate, uses a very powerful hit-all Magic Attack (with a terrible Magic Power of 15500), which happens to be Anton's weakness. As a result, his special attack will hit every stack for lots of damage. However, Ahribban only has 80,000 hit points. Even though Anton's units usually can't hit for 5 digits of damage, Ahribban should go down a little more quickly than Uriel. In my game, I even saw Ahribban lost a turn due to low morale (thanks to Arache and Anethema's morale debuff), and Ahribban went down on Turn 2 in a perfect loss during Hour of Judgment. Poor boss.