Might & Magic: Heroes VI → Haven → Tempt not a Desperate Man

Hm... Mission 3 at v1.1.1 does not look like a finished product. There are two serious bugs and one obvious flaw. The first bug could get you stuck forever. The second bug usually renders one of the side quests unable to be completed. The flaw? This mission is way too easy. The neutral stacks are usually smaller than those found in Haven mission 1, and of course smaller than those in mission 2. The AI is unable to build walls in all of their towns, which are usually defended with a miserably small garrison. Most bosses, including the last one, do not even have high-tier units!

Dynasty Traits: As Griffins, Blazing Glories and Sun Crusaders take the center stage of your battles, Elite creature +1 growth looks pretty good! Free first generic hero never disappoints, too. By the way, you will still reach the level cap easily, so again all chests can be cashed as usual. There is no need to waste precious crystals at Seven Dragon Shrines. 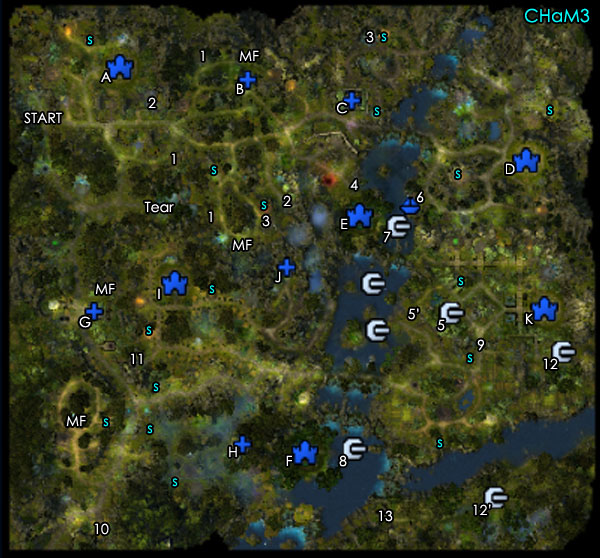 Haven Campaign Mission 3
Level cap: 24
Difficulty Index: 1/6
Last updated: November 24, 2011
You start in the northwest corner of the map. A so-so secondary magic hero joins you (she will return on mission 4, too, with the exact same condition that you left her here.) While she looks like a kick-ass heroine, she has no healing spell! But she does have some town-management Realm feats. I used her as a "house keeper", traveling across towns to commission discounted upgrade buildings and ship new units to Anton when a new week arrives. Maybe give her the Regent artifacts (you should already have 2, and you can find another 2 in this mission) to increase her effectiveness in the supporting role. 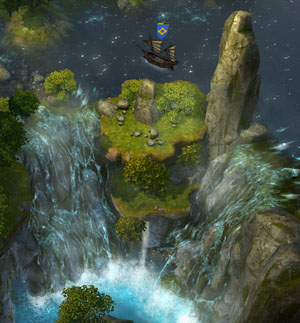 Rush northeast and pick up your first town (A). This will be your only town and primary source of recruitment for a while. Next, you need a stable supply of Wood, Ore, and crystals. The nearby Sawmills are marked by (1); Orc Pits are marked by (2); and Blood Crystal Mines are marked by (3). You can't flag the second Blood Crystal Mine to the northeast for a while, but just keep in mind there is one. You can first sweep clean the vicinity of Town A to collect some easy resources. The ruins, pyramid, and barbarian camps on this mission frequently give several Blood Crystals. They are all very lightly guarded.

There are two roads leading to south, which will eventually converge and connect to a neutral Fort and then some enemy Sanctuary territory. While this sounds like a strategic choke point, the Sanctuary heroes will never bother invading you from the south. Their scripted army will come to your east side. At one point, I even saw two heroes coming at the same time. So let's focus on the east first so we can beat the invasion as soon as they show up. Take Fort B if you have not already done so. Immediately to your east is a Sanctuary Fort C that's very easy to conquer - why not?

The Sanctuary invasion lands at (4), which is quite close to both Fort B and C. There is nothing else you can do to stop, even to block the invasion. The Sanctuary heroes can apparently walk on water, so they have lots of options. In the meantime, you can keep expanding, and come back when the invasion arrives. The invasion actually emerges from the one-way portal at (5-5'), and you won't be able to get to (5) until much later in the mission. The sanctuary heroes do like to go straight after your nearest undefended town or fort. If you want to have a one-day warning, get the unique town building Statue of Revelation and reveal the area around (5').

A passive-aggressive strategy is to lure the AIs close and finish it before it can escape. Town E is perfect for this purpose. You can build an Advanced Town Portal here. This was the only Advanced Town Portal I built in my game, and it was handy for travelling purposes later, too. But we can't take Town E yet, since we can't walk on water. 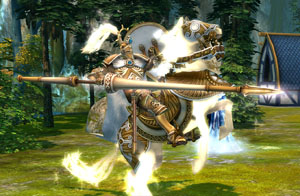 For now, clean up the neutral stacks, pick up resources, and flag the mines in your territory. Develop Town A well. You can build a Basic Town Portal in Town A and use a secondary hero to ship new units to a nearby fort or town.

It would be a good idea to stay in your northern territories until the arrival of the second wave of invasion. However, if you are very efficient at cleaning up neutral creatures, you might be able to launch the next phase of expansion before the second wave arrives. Your next target is Town D to your east. It is quite a straight walk east of Fort C. This town, like many others you will see, is very lightly guarded.

Before going mad on the resources around Town D, there is a shipyard at (6), allowing you to build a ship and quickly return to Fort B/C area. Chances are some Sanctuary's hero have arrived, or will arrive soon. A ship also gives you direct access to Town E. Now you can go ahead and rob Town E from the imbecile AI! You will also receive a side quest to convert 2 Sanctuary towns. 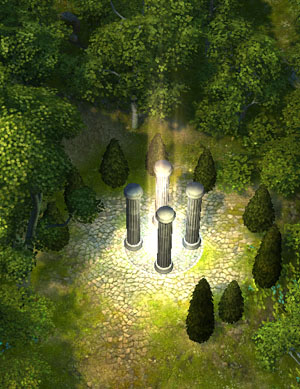 BUG ALERT: If you play normally - taking Town E when you can - this "convert 2 Sanctuary towns" side quest is bugged and can never be completed. I once read a work around - you have to trigger the next stage of the main quest (see next "bug alert" section) before activating this "convert 2 Sanctuary towns" side quest. But it is very counter-intuitive. Fortunately, you don't lose anything important for being unable to finish this side quest.

Now you have Town E, and it will serve as your front line from now on. Get an Advanced Town Portal in there as soon as possible. If you see an army coming out at (5'), return Anton to Town E on the same turn, and the AI hero will either charge Anton, or be within Anton's reach in the following turn (don't forget to leave a ship on the shore of Town E). Your territory is from now on forever safe.

Let's take Town F just because we can! It just right there begging to join the Light side. Town F is defended by a larger army than you saw before, but it is still very weak compared to mini-bosses in earlier missions. With your superior home production, you should be able to handle them easily with a week or two of fresh units. In the meantime, you can clear the area of Fort C and Town D, if you have not already done so. There is an extended area west of Town D, including a Crystal Mine (3) and some stats boosts (s). You must have seen them from Fort C. 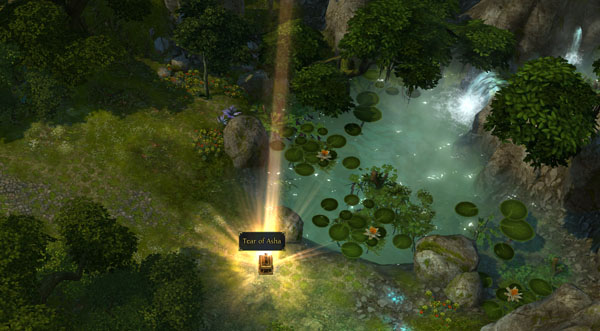 Now is time to progress the main quest, which could be seriously bugged if not done early enough. Before you do anything else, use the Statue of Revelation to reveal the area marked by (9) (reveal the area a little to the south just to make sure it works). You should see an opened gate at (9) and a Sanctuary hero just south of it. When you move Anton (any other hero should work) close to (9), which is just a one-day trip from the middle-level lake, the enemy hero should dock inside the castle, the gate should close, and a dialogue should trigger between Anton and some secondary characters. 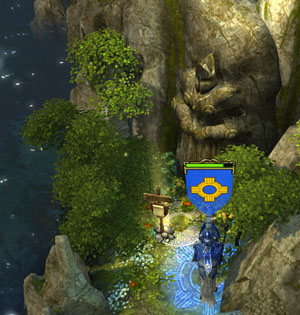 BUG ALERT: The serious bug involves an additional Sanctuary hero blocking the gate and hence the access of the designated Sanctuary hero. Later on, when your Anton gets close to (9), the game freezes up. I read that the only solution to this bug is to prevent it - by revealing the location of the gate beforehand, and trigger the side quest to advance as early as possible (before the game puts a gate-blocking hero there). It is also possible to complete the "Convert 2 Sanctuary Towns" (Snakes in Heaven) side quest if this side quest is triggered AFTER the main quest advances. But that would involving skipping Town E and F and head directly to (9) after taking Town D. How would one know to go to (9) first? This area is not designed to be visited early judging from the increased stack sizes.

Now you have the main quest and the enemies' invasion under control, you can happily work on the rest of the map. Let's dig up the Tear of Asha. All of the four moon fragments are marked (MF) on the map. You should have picked up two around Fort B. If you follow the road south from Town A, you can flag Fort G. There is your third piece of moon fragment directly above it. Keep going south and you can take Fort H from Sanctuary. From Fort H, you can go southeast to (10) to flag a warpath lodge (+3 movements for defeating an enemy) and grab the fourth and final moon fragment in the middle of an isolated area. The location of the Tear is marked on the map (Tear). It is within two days of travel from Town A. Install the Tear in your capital and cheer! What an overkill in this easy mission (but the completely moon shard will save you in early mission 4). From Fort H, you can go north to take over the Sanctuary Town I and Fort J. They should be very easy as well.

You now have everything but one town, Town K, the source of invasions. It can only be accessed with a little quest work. As a Blood-Might Anton, I was told to visit a mansion at (11). After a very relaxed mini-boss fight, I was given an artifact that increases siege weapon's structural damage by 1. Now all I needed to do was to march any hero close to (9) to watch the wall crumble.

When you have finished businesses with your new territories, march a fully-loaded Anton through (9) either via ship or the shallow-water path above the falls, and take Town K like slapping a baby AI. The neutral creatures east of the river finally look a little promising, but the Sanctuary AI was as weak as before. By the way, there is an interesting Easter egg statue and sign northwest of Town K.

Lucky for us, this non-challenge is almost over. Finally, march through the portal at (12-12') to beat the extremely weak boss at (13). Did you expect a boss as powerful as Miranda back in Necropolis mission 3? Too bad.