To win, you must accumulate 200,000 gold. Your Heroes will be limited to 12th level in this scenario, but your 8 strongest Heroes will be available to you in the final scenario of this campaign. Starting Bonus: 3 Thunderbirds or 2 Cyclops Kings or 1 Ancient Behemoth. 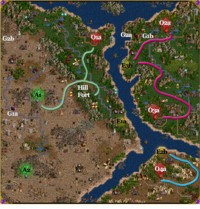 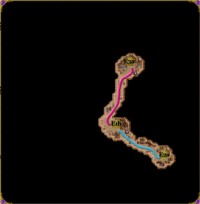 Take the Behemoth as your starting bonus as you will be able to easily upgrade it to an Ancient Behemoth and it will help you in an aggressive strategy to eliminate the enemy. Don't fret at the enemy having four towns because not only is the enemy restricted in what it can build while you're not, but there is a Hill Fort close to A1 that will save both time and resources.

The final map of this campaign uses the heroes either from this map or the Fortress heroes from the previous map. If you want to use these heroes then be sure to have your primary hero at level 12, and one other hero at least level 10. Also make sure that one hero has the Pathfinding skill as the swamp will slow you down too much otherwise. The only Places of Learning that I recommend visiting are the Arena north of A2, the Marletto's Tower southeast of A1, the School of War north of O3a, and the Library of Enlightenment upon reaching level 10.

I recommend that you use A2 as a gold-generating town while building a Roc and Behemoth structure in A1 along with a Castle and a Capitol, especially since wood will be your main limitation the first few weeks. You will be able to win this map with just those two creatures and using the Hill Fort to upgrade them. Spend the first week flagging mines and building up your towns. When you're ready, give the hero of your choice the troops and have him follow the green path through the halberdiers to the Hill Fort and finally to O1a. Spend some time in the area flagging the mines and grabbing the artifacts until you can get the week three troops. That will provide you with a big enough force to make your way to E1a and to start defeating the enemy. Just remember to visit the Hill Fort first.

After giving one of your heroes the troops and visiting the Hill Fort, head to E1a and north on the pink path to E3a. There are two enemy towns in this area and, most likely, the toughest of the enemy heroes. It doesn't matter whether you tackle O2a or O3a first as long as you take over both towns and make sure there are no enemy heroes remaining. Once you're finished, you have to defeat the last remaining enemy town. It's a good idea to use a second hero for this as your first one has most likely already reached level 12 by now. Simply give him the troops you have, visit the Hill Fort, go to E1a and head south on the blue path to E2a. There is probably a weak hero wandering around close to O4a but he shouldn't be very much trouble and their defeat will mean the end of the Red enemy.

With six towns, it won't be difficult to earn the 200,000 gold necessary to beat this map. Simply exchange the vast quantity of resources you have collected by now for gold and that will probably be enough. Optionally, you can visit both G1a, G1b, and G2a for the mass quantities of gold behind G2b but that won't be necessary.