To win, you must flag all mines. Your Heroes will be limited to 12th level in this scenario, but your 8 strongest Heroes will be available to you in the final scenario of this campaign. Starting Bonus: Korbac or Verdish or Random Fortress Hero. 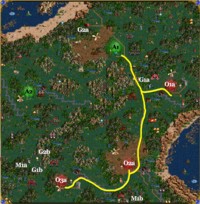 I recommend that you take Korbac as your hero since he increases the Attack and Defense skill of any Serpent Flies or Dragon Flies he commands for each level he attains after the third level and you are going to use these as your primary units.

The final map of this campaign uses the heroes either from this map or the Stronghold heroes from the next map. If you want to use these heroes then be sure to have your primary hero at level 12, and at least two other heroes between level 8 and 11.

While your goal is to flag every mine, it's easier to defeat the enemy so they won't bother you. So hire another hero in your other town and flag mines with both heroes. Build up the Dragon Fly and Lizard Warrior structures, Citadel/Castle, and the City Hall in the A1 town. At the beginning of the second week, hire all of the creatures and head south on the yellow path through the garrison. There are 12 Pikeman and 10 Marksmen that you'll have to defeat but that shouldn't be very hard. Then simply conquer each of the three towns and all of the wandering heroes starting with O1a, then O2a, and finally O3a. You can defeat the enemy in about a week without losing very many troops. Two of the towns are heavily restricted in what they can build and if you act quickly enough, all the enemy will have are some Pikeman and Archers.

Once you're ready to finish this map, have your heroes flag all of the mines. There is a gold mine that you have to visit either G1a or G2a to get through the Guard Towers at G1b and G2b to visit the mirror at M1a and finally the gold mine near M1b.