CH →
Walkthroughs →
Specter of Power → To Build a Tunnel
﻿

Specter of Power → To Build a Tunnel

Obtain 100,000 Gold to give to the Dungeon Overlords and win the scenario. However, if Sandro is defeated in combat, the scenario is lost. Heroes are limited to Level 16, but Sandro and three of his comrades will carry their experience, skills, and spells on to the next scenario. Starting Bonus: 15 Wood or the Vial of Lifeblood. 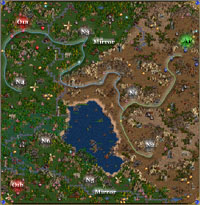 You can either go one of two routes, defeat both heroes or simply engage in enough battles to get to the level limit of 16 and visit underground for the places of learning while you earn gold. Since all you need to do is get 100,000 gold both tactics are valid in winning.

Pick the Vial of Lifeblood as your starting bonus as you will earn more than enough wood soon and your troops will last a lot longer with 2 more hp.

For the first week I focused on flagging mines and taking over the other two neutral Necropolis towns in my area. Use the other three heroes busy by flagging mines, picking up loose resources and visiting all of the creature generators you can. Since you will be short on wood and ore for the first few weeks they will comprise much of your troop strength. I worked on building up to City Halls in A1 and N2 while building up to Vampire Lords in N1. I chose to build up N1 instead of A1 because Sandro could pick up the vampires on his way back from taking over N2. Since I didn't have Town Portal traveling to A1 would take too long. I then went north of N1 to flag the two gold mines up there and visited creature generators until N1 had Vampire Lords and went back to upgrade my vampires. Then I followed the blue path in the third week and worked on defeating the red hero. Be sure to use View Air and defeat the enemy hero by the town you take over before moving on to the next one. If you have the resources I suggest building the mage guilds in the Rampart towns for the chance at getting the Town Portal spell. I wasn't so lucky.

At this point, even if you have defeated the Red hero the Pink one will probably be giving you a lot of trouble with some very tough heroes with a lot of troops. Sandro will be level 16 so I suggest using one of the two mirrors to go underground and visit the places of learning before you get 100,000 gold. Once you do, you'll have won the map.