CH →
Walkthroughs →
Specter of Power → Poison Fit for a King
﻿

Specter of Power → Poison Fit for a King

Capture Haart Castle and leave the Vial of Poison to win the scenario. However, if Sandro is defeated in combat, the scenario is lost. Heroes are limited to Level 10, but Sandro and three of his comrades will carry their experience, skills and spells on to the next Scenarios. Starting Bonus: Boots of Speed or 20 Zombies or 3000 Gold. 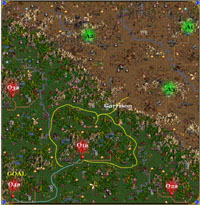 This map is impossible to beat until you take the strategy of building up troops for the first five weeks and heading straight for Haart Castile while avoiding all except the weakest of the enemy troops. The reason for this is the enemy has four Castles which are somewhat built up and plenty of resources while you start out with three towns with nothing built and you will be suffering from a shortage of both wood and ore in the first few weeks. To make matters worse there are enemy heroes which you will not be able to defeat no matter what and the only chance to win is to avoid them. Therefore, take the Boots of Speed as your bonus.

With Sandro concentrate on his magical abilities such as Wisdom, Intelligence, Earth Magic, Air Magic, and Logistics being necessary for success. I never bothered much with the three heroes that carry over and so hired gold and resource produces and used them to pick up loose resources and flag mines.

The first four weeks determine whether you will succeed or fail at this map. What I did was spend the first week in every town by building the Cursed Temple, Graveyard, Tomb of Souls, Estate, and a Mausoleum if you have the resources to spare. I did this before building a Mage Guild, Necromancy Amplifier, Cover of Darkness, and upgrading the Town Hall to a City Hall which I did in the second week. If you ever find yourself low on resources in the first week then build something from the second week that doesn't require any. After you have City Halls you can upgrade the Mage Guilds which Sandro will need in the next map. I know this is not a normal build order but it worked for me.

While you're doing this, have Sandro flag the Ore Mines and Lumber Mills before anything else. Try to avoid losses in battle whenever possible and be sure to check out the Witch's Huts as they seem to be set to offer skills which are actually relevent to what Sandro needs (secondary heroes are good for this). The Scholar to the north offers the Archery skill which I'd avoid since Sandro isn't going to have an army of Liches anymore. The Scholar to the south offers +1 Knowledge which I'd try to grab near the end of the four week preparation phase. The Buckler of the Gnoll King which is found north of A1 gives 4 to Sandro's defense which is worth getting.

In the beginning of the fourth week start upgrading the troop production buildings in A3 if you haven't done so already so that in the beginning of the fifth week you can use your secondary heroes to bring troops there to upgrade and give to Sandro. As soon as this is done take Sandro along the yellow path and visit the Redwood Observatory so you can see where the enemy heroes are. Depending on where they are you might want to go the north path or the south path. The south path is better because it takes you past a Marletto Tower (+1 Defense) and Mercenary Camp (+1 Attack) but that area has a better chance of having enemy heroes so you might need to avoid that area.

If O1a isn't heavily guarded then I suggest taking it over in the hopes of getting the Town Portal spell and in getting a faster horse. Once done there follow the blue path to Haart Castle and the final battle. If the hero is in the castle you might have to hire a hero from O1a and use it to lure the hero out so Sandro can easily defeat the enemy hero outside of the castle gates. Once you take over Haart Castle, the map is won.