Civilization Series Favourite Scifi/Fantasy...
28.11, 13:14 by Blake (5 replies)
in Campfire
Hey guys, been a while since the last project update again as I've been continuing work on my huge Civ2...

Obtain the Eversmoking Ring of Sulfur for the Kreegans to win the scenario. However, if Sandro is defeated in combat, the scenario is lost. Heroes are limited to level 24, but Sandro and three of his lieutenants will carry their experience, skills and spells on to the next scenario. Starting Bonus: Equestrian Gloves or 10 Wraiths or 10 Wood and 10 Ore. 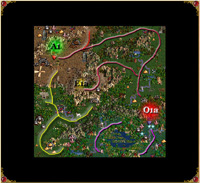 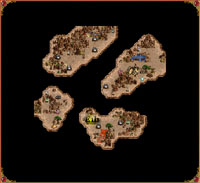 This is another one of those maps which pits your undeveloped town versus an enemy with not only a town that is partially built up but with access to more troops, more spells, and has the same stats as you do. You can't afford to sit back and build up because even though you both have one town, Melodia (the enemy hero) will have many more troops than you do. Fortunately she is trapped in the area by her castle so you don't have to worry about her appearing out of nowhere.

Pick the Equestrian Gloves as your bonus as you need the speed and Skeletons and Zombies are very slow and you can't afford to leave them behind as you usually do.

Kill the creature stacks in front of the wood and ore mine and kill the Pegasus stack to get some more Skeletons (be sure to build the Necromancy Amplifier) and head along the east path so you can flag the Vampire structures. Use the other heroes to flag mines and the two Wight structures as well as to recruit from them every week. Take gold from the chests and focus on the first week building the Wight and Vampire structures as well as the Castle. Be sure to leave a hero by the Vampire structures so you can recruit from them every week as you need every additional troop you can get. Don't bother having Sandro visit the places of learning in his first visit since he'll be returning and you can visit them then and you want to head south from A1 along the yellow path to visit the mines first. Be sure to visit the crypt because you are guaranteed to get the Skull Helmet which gives you +2 to knowledge and you also need as many magic points as possible.

After you've done all this you can concentrate on building up to a City Hall and Capitol in the second week and then building the upgraded Skeleton, Zombie, Wight, and Vampire structures in the third week. The garrison just before E1a suppresses magic so you need more troops then usual to make it through without many losses. There's no need to place any troops in the garrison since Melodia won't be threatening you.

You can take Sandro underground since there are many Refugee Camps and Trees of Knowledge and wandering stacks but it's very important to use your magic sparingly. You'll need every point when you face Melodia and you should be able to get by with just Magic Arrow and Death Ripple. Just be sure to not go through the last mirror until you're ready.

I gave Sandro Necromancy, Sorcery, Earth Magic, Wisdom, Intelligence, Air Magic, Offense, and Water Magic. While I was also offered Fire Magic I picked Water Magic because Melodia's castle has the spells Summon Water Elemental and Prayer were an important part of my final strategy.

In Month 2 hire all of the Wights and Vampires and return to A1 and upgrade all of the troops to give to a secondary hero and transport them to Sandro. It's very important to have a second hero in addition to Sandro because you want to lure Melodia out of her castle. Give the second hero one skeleton and have him go through the final mirror and stop below the tree. Send Sandro through the final mirror and have him stop to the left of the magic shrine. Melodia will leave the castle and attack your second hero and not be able to use town portal to return to the castle. Use Sandro and have him take over the Castle which should be easy since Melodia will have left the slower troops such as the Dendroid Soldiers. Then Melodia will attack the castle on the next turn.

This will be a very tough battle and the Summon Water Elemental and Animate Undead spells will be very important. This is why you need as many spell points as possible because Melodia will have as many spell points as you do and will use Raise Dead, Sacrifice, Summon Elemental, and Prayer among other spells. What I did was not use the Wraiths and let them absorb Melodia's spell points and let Melodia come to me while I cast Summon Water Elemental and Animate Undead when necessary. You will likely have to try this battle and perhaps this map several times before you succeed but it is possible if you use magic correctly and attack Melodia in the first week or two of the second month. This is the results of the final battle and these are the artificats she had.

Civilization Series Favourite Scifi/Fantasy...
28.11, 13:14 by Blake (5 replies)
in Campfire
Hey guys, been a while since the last project update again as I've been continuing work on my huge Civ2...