The map is divided into two parts.  Teal (Reed) and Blue (Magnus) are on the left side while Green, Red, and you are on the right.  Teal is your ally, and it’ll try its best to hold Blue in check, but it’ll be defeated as soon as Reed is defeated, and that’ll probably happen within the first couple months, unless the two players just spend the entire scenario trading resource buildings, which is possible.

Meanwhile, you won’t be able to get to Blue or Teal until you acquire the Mind Shield, which will be a while.  But this will give you the opportunity to watch a computer player at work, and so if you ever suspected that the opponent AI is weak, now is your chance to verify that theory firsthand.

Note: If you’re using the retail release of the game, Blue won’t capture any of Teal’s towns or resource buildings after Teal is defeated, making the last part of the scenario easier.  But if you’re using the patched version, then you’ll have to deal with a stronger Blue at the end.

To start off, if any of your heroes has nobility, have that hero visit your starting town.  Then you can either put all your heroes together into one army, or you can try splitting them up so they cover more ground.  If you built up Kodge in the last scenario, then he can probably work well enough by himself and kill some of the neutral stacks while Emilia and Solymr take on the heavy duty fighting.

Your part of the map is pretty standard with resource buildings and troop buildings -- except that the troop buildings are for Life units rather than Order units.  If you want to keep Kodge separate from Emilia and Solymr then this works out well enough since he’s a Life hero anyway.  Otherwise, feel free to ignore the Life troop buildings, and only recruit from them if an enemy hero approaches.

Once you’ve cleared everything from the ferry (to the north) to Green’s garrison (to the south), put as many Order troops as possible into your main army and head for Green.  With three high level heroes plus two towns backing you, you should be able to easily defeat Green, who only has one town.  Once Green is eliminated, clear out everything beyond the garrison and then head for Red (by using the ferry). 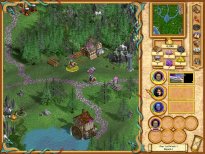 Red’s island, like the main map, is divided into two parts.  The western side has a single Red town plus some things useful to your heroes (artifacts, ability gems, trees of knowledge), while the eastern side has two Red towns plus the Mind Shield.  Since obtaining the Mind Shield opens up the path between your lands and Blue’s lands, you should do the eastern half last.

There shouldn’t be any problem conquering everything in Red’s domain.  Chances are, your three heroes can do it by themselves, and with lots of titans, genies, and magi, it should be overkill.  The only difficult fight is likely to be the titans holding the Mind Shield.  They’re located next to the purple dragon portal at (7,114), just past Red’s two eastern towns.  But with liberal use of hypnotize, martyr, and forgetfulness, even a stack of 60+ titans poses no problem.  Once you defeat the titans and gain the Mind Shield, take the dragon portal, re-supply your troops, and then head for Blue.  The path should be open now.

All you have to do in Blue’s lands is kill Magnus, so don’t worry about capturing towns or resource buildings, unless you just want to increase your visibility in the area.  Note also that you shouldn’t capture Blue’s southern town.  For some reason if you capture it and Blue captures it back, you’ll lose the scenario.  So just hunt for Magnus, and kill him when you find him.  He’ll only be around level 25, and he probably won’t have a strong army with him.  None of your heroes needs to wear the Mind Shield.  Once Magnus is down, the scenario (and campaign) will end.