Rise of the Necromancer → Target

Defeat all of Sandro's enemies to win the scenario. However, if Sandro is defeated in combat, the scenario is lost. Sandro is limited to level 5 but will carry his experience, skills and spells on to the next scenario. Starting Bonus: Lightning Bolt Scroll or 8 Walking Dead or +2 Attack Skill 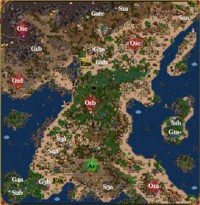 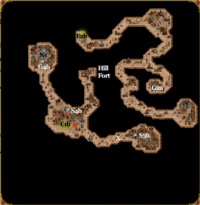 Although you might be tempted to take the +2 Attack Skill as your bonus, taking the Lightning Bolt scroll will make the first three weeks much easier. Not only will you be able to attack wandering stacks immediately but you will be able to defeat the enemies closest to your starting town much sooner and before they become a dangerous threat.

You also have to equip all of the artifacts that Sandro has and agree to combine them. You get Armor of the Damned (casts Mass Slow, Mass Curse, Mass Weakness, and Mass Misfortune on the enemy when you get initiative which lasts until the end of combat) and Cloak of the Undead King (gives a +30% Boost to the Hero's Necromancy ability as well as raising Walking Dead at basic Necromancy level, Wights at advanced Necromancy level and Liches at expert Necromancy level). These effects are in addition to the bonuses each of the artifacts give individually. Therefore, you should increase your Necromancy skill whenever possible.

Both O1a (blue) and O1b (tan) will be nosing around in the first week so building the Cover of Darkness will keep them away for a bit longer. You should focus on creature generator buildings instead of gold producing buildings for the first week or two so you can defeat both of these enemies quickly. Fortunately, there are quite a few treasure chests, gold piles, and gold mines lying around close to A1 so you will not be lacking money. I suggest attacking O1a (blue) first since their hero, Jeddite, is dangerous with his high mana points, Magic Resistance, and a Destroy Undead spell and seems to be much more aggressive in building their town than the O1b (tan) hero. I suggest defeating both O1a and O1b as soon as possible and I was able to do it by the end of the third week. At this time, you should be raising Liches with your expert Necromancy and it will make the rest of the map much easier.

Be sure to hire heroes in both O1a, O1b, and A1 along with hiring troops there because the enemy might land and attempt to take them over. They are mostly scout heroes so building Castles and continuing to hire troops will keep them mostly safe. By this time you will have enough gold and resources that doing this shouldn't be a problem.

I took Sandro with his Liches and left everything else to my secondary hero and traveled north to defeat both O1c (green) and O1d (orange) along with any enemy hero along the way. Since it takes so long to travel anywhere, it's possible that a enemy hero from O1d (orange) will travel to your area while you are making your way to O1c (green). This is why you want to maintain some troops in each of the towns you conquer because if the enemy hero is a scout or doesn't have a lot of troops, Sandro doesn't need to backtrack. Once you defeat O1c (green), hire a hero and as many troops as you can and make your way to O1d (orange) and do the same there. Any remaining enemy heroes should attempt to take over any town they can but they should be easily defeated.

The only remaining enemy is O1e (purple) and they are cursed with having only one exit from their town and with your huge army of Liches you will be able to defeat them easily. Yet you don't want to do that. There are quite a few Places of Learning and many seer quests with rewards you absolutely don't want to miss. So what I do is park Sandro at the gate west of S1a and then bring up a good secondary hero with all of the troops from your Necromancer town and then take Sandro on a multi-month tour of the map. You might have to ferry additional troops to replace any that are lost in battle but you shouldn't have many problems with holding off O1e (purple) from being anything more than a nuisance.

S1a wants a Titan's Gladius which is found on the island to the east and will give you +13 Attack. S2a wants a Clover of Fortune which is found in the marsh area in the southwest area and will give you +3 Knowledge for it. S3a wants a Sentinel's Shield which is found underground and will give you +13 Defense. S4a wants a Eye of the Dragon and will give you +2 Knowledge. S5a wants 12 Griffins which you can only fulfill by having a wandering stack join as there are no Castle towns on the map. It seems that having a Month of the Griffin is programmed into the map as I got one every time I played this map. I actually was able to hire a hero with Basic Diplomacy to get Griffins, gave them to Sandro, and went to S5a. I was told that I'd be rewarded but didn't notice any change or improvement in my skills so I think this quest is useless.

One final thing you may want to do is go underground at E2a and defeat the Titans there to visit G2a, go back up and visit G2b which is east of E2a and then G3a which is a bit north of that. Then go to the southwest corner at G3b to get the Clover of Fortune and G4a. This lets you have access to a Necromancer town underground which is defended by a large force but is fully built-up and has the holy grail which has some very nice bonuses. This is completely optional and not necessary to win but it's fun to do.

Be sure you've visited all of the Places of Learning, the Witch's Towers if they have good skills, the mage guild in every town for spells, and completed all of the quests (except for S5a with it wanting the 12 Griffins) and travel to O1e. There use Sandro and his giant army of Liches to easily defeat the enemy. You should have no problem in winning, even if the enemy has two-dozen Archdevils.