CH →
Walkthroughs →
The Price of Peace → To Slay an Immortal
﻿

The Price of Peace → To Slay an Immortal

This is basically two scenarios in one. Emilia, Tharj, and some low level heroes need to explore the surface part of the map (and find the sword) while Solymr explores the underground part of the map (and defeats the hero). But the two groups will never meet up with each other, so, instead of trying to cover both groups at once, I’m going to write a walkthrough for each.

Note that Kodge carries over, but not Tharj. This puts you in a quandary: should you try to level up Kodge and ignore Tharj, or group Emilia and Tharj together anyway since they’re your best heroes, or ignore Kodge since you’ll get Emilia and Solymr in the next scenario anyway? I think the best answer is the first one. Emilia won’t gain many levels regardless, so you might as well make Kodge as powerful as possible heading into the last scenario. So put Emilia and Kodge in your main army while Tharj and the other heroes form your utility army.

The map starts out pretty linear. There’s only one way to go, so go that way while killing all the neutral creatures you run into. If you find a stack that’s too difficult for Emilia and Kodge to defeat, then bring in Tharj to help out. Eventually you’ll pass a blue keymaster gate leading to Blue’s lands, but you won’t be able to do anything about it. The blue keymaster tent is on the other side, so only Blue can use the gate. Eventually Blue will exit the area and start capturing your resource buildings, but by then it shouldn’t matter.

Past Blue’s lands, you’ll come to a fork in the road near an ivory tower. The southern trail leads to a dead end area without much in it, so you can go ahead and skip it. The main trail is the northern trail, and it’ll stay linear for a while until you reach a ferry. The ferry allows you to cross the river to get to the area that eventually leads to the sword, but it’s better to skip the ferry. Eventually you’ll find a portal that will lead you to the same area.

So keep heading south. You’ll pass Green’s area (which, just like Blue, you won’t be able to do anything about), and you’ll find lots of skill altars, plus lots of large stacks of neutrals. Eventually, after turning east, you’ll come to a neutral army guarding a portal. Compared to some of the neutral stacks you’ve just seen, the neutral army shouldn’t be very difficult. Just be sure to take down the heroes first. Then go through the portal.

This new area is similar to the area where you just were, with lots of skill altars and large stacks of neutral creatures around. The difference here is that Teal, Blue, and Green all have access to the area, so they might have killed some of the neutrals and used some of the altars. (But more likely, they’ve just gotten themselves killed.)

So explore the area. The western side eventually leads to Teal’s lands, so it’s optional, and you should do it first. The southern side eventually leads to a quest gate that will only allow Emilia to pass. Past the gate you’ll find a garrison of Life troops, and then beyond that, underground, you’ll find a disappointingly small stack of bone dragons guarding the Sword of the Gods. If you’ve been able to defeat the previous neutral stacks of creatures with just Emilia and Kodge, then you shouldn’t have any problem with the dragons.

Once the bone dragons are dead and the sword is in your possession, you can go through a yellow two-way portal that leads to the teal, blue, and green keymaster tents. So if Solymr is still tracking down Mazellian under the surface, you can mess around attacking the other computer players if you want. 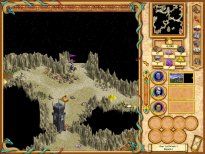 Solymr once again starts with some genies, so put Solymr and the genies together into one army, and put the dwarves in the other. Then Solymr’s army can kill things while the dwarves pick up stuff.

You should notice a quest gate just to the south of where Solymr starts out. It won’t open until you bring eight earth elementals to it, but conveniently there is an earth elemental portal just to the west. So immediately flag the portal, and then explore the eastern tunnel (and generally hang out) until the portal produces enough elementals. Then pass through the gate.

At about this time you’ll receive an underground Order town, but it will arrive unannounced, so watch for it. Then you can build it up while Solymr makes his way through the tunnels. With your starting town providing money, plus nobility on a few of your heroes, you should have all sorts of money, so concentrate on adding troop buildings before money buildings.

You’ll pass a few troop building as you make your way to the town. Have Solymr flag them, but don’t recruit more troops into his army. They’ll just slow him down. Instead, add the troops to your utility army, which will be slow anyway because of the dwarves and earth elementals.

When Solymr reaches the town, have him follow the tunnel to the east (but don’t take the dragon portal). The tunnel becomes a dead end, but you’ll still find a mage tower and a genie altar, and by the time you get back to your town, it should be built up enough that you can create a sizable army when heading south.

To the south the tunnel branches. The eastern branch is guarded by some bone dragons, and it leads to the towns you need to defeat to end Solymr’s part of the scenario. Since the underground part of the map has fewer places to visit than the surface, it’s best for Solymr to take the (mostly) optional tunnel branch to the south. (But go ahead and kill the dragons first if you want.)

In the next area you’ll find some resource buildings, plus the red keymaster tent, plus a tree of knowledge. Since you’ll be passing by this area on your way back, check Solymr’s experience. If he’s a long way from gaining his next level, use the tree now. Otherwise, wait for the return trip.

Continuing down the tunnel, you’ll find one of Red’s Death towns. Since it’s split off from Red’s other two towns, it should be lightly defended and easy to take. Then, if you continue along the tunnel, you’ll find yet another Death town. It might be neutral or controlled by Red. Regardless, capture it, clean out any neutrals nearby that you want to kill, and then head back towards your Order town. But don’t go to the town; instead take the eastern branch of the tunnel that you skipped before, and use the dragon portal next to your town to quickly re-supply your army.

Progressing through the tunnel, you’ll first notice a quest gate. It’ll only let you pass if you capture the Red town to the north. So do just that. Red’s towns are divided by gates as well as by distance, and so they’ve all probably remained separated, making them easier to conquer. But once you get to Mazellian in the town past the quest gate, he’ll have a stocked army with him. But he’ll probably standing on a turret when you face him (if he’s inside the town at all), and if you can kill him right away, his army should be straightforward to defeat. If not, just keep Solymr near the town and keep ferrying troops to him, and eventually you should have enough.