Bring the Vampire's Cowl to the town of Leafhall to win the scenario. However, if Gem or Clancy are defeated in combat or you lose the Cowl, the scenario is lost. Your heroes are limited to level 20, but Gem and Clancy will carry their experience, skills and spells on to the next scenario. Starting Bonus: Town Hall or 15 Wood or +1 Defense Skill. 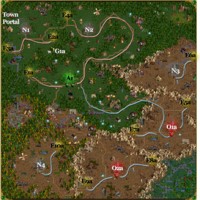 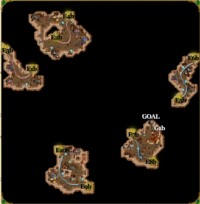 I'd select the Town Hall as your bonus so you can focus on getting Wood Elves and the Castle the first week and be closer to getting the City Hall. One good thing about this map is that the Mage Guilds aren't restricted in any way so if Gem has Wisdom, it finally will be put to some use on this map. After the enemy is defeated, I recommend building a level 5 Mage Guild in every town for the widest selection of spells, especially the important level 4 spells.

As usual, give Gem all of the starting troops and hire another hero for additional troops. Build a Homestead in A1 and recruit the Wood Elves and also give them to Gem. Flag the Centaur Stables and Dwarf Cottage on the second day and give them to Gem as well. Now you're going to make a circle route of your area and conquer both of the neutral Rampart towns. Since they don't have Forts, they will be used for their gold and for their Centaurs and Dwarves. On the second or third day, go east or west along the red path ignoring all of the artifacts since they are all guarded. Take over N1 and N2, being sure to flag the Centaur Stables, Dwarf Cottages, and Homesteads that are by the Rampart towns and hire all of the troops that are available at the towns. You should have a good force by the time you return to A1. In A1, be sure to build a Castle and the Upgraded Homestead for the Grand Elves at the very least.

By the time Gem returns, it'll be in the second or third week and she can upgrade all of the troops she gathered along her journey. There's a very valuable Town Portal scroll guarded by either Behemoths or Angels to the west of N1 that you will want to get sooner rather than later. You can get it now since it's relatively close and with your upgraded troops you probably won't suffer many losses and it'll be easy to get back to A1 once you have it. I suggest flagging the local mines with Clancy while leaving Gem at A1 to protect your territory if the enemy tries to invade while you're waiting to build up a larger army. In the 4th week or the start of the second month, you should definitely invade the Necromancer territory.

Give Gem all of the troops and head on the blue path. You'll have to battle a wandering stack of Giants and Titans but the Forget or Blind spell will be very handy here. Continue along and head through the Garrison (Mass Slow will be very helpful here for your Grand Elves) and take over O1a and any enemy heroes nearby. What you do now depends on what the enemy has done and where the enemy heroes are. Using View Air is a big help here. So if the enemy hasn't taken over N3 and isn't on the way to take it over, then go southwest instead and take over O2b. Pay careful attention at the start of each round to make sure the enemy isn't trying to take over one of your towns and use Town Portal to quickly defend your acquisitions. I suggest going through the gates instead of the Garrisons because the underground isn't that big and it will take you another day at the most to get through them. I'd rather take a bit longer to get to the enemy than losing troops because I wanted to take a shortcut. In addition, with your Town Portal scroll you should have no problem with getting quickly to where the enemy is if they happen to slip past you. Once the enemy is defeated you can relax and concentrate on raising the level of both Clancy and Gem as well as visiting all of the places of learning.

Since there is no grand final battle before winning this map, it's not necessary to get a lot of troops. I suggest building a level 5 Mage Guild in every town and having both Gem and Clancy visit every town (made even easier with the Town Portal scroll). I think that either I was extremely unlucky or the spell was prohibited since I didn't get the Town Portal spell in any of the towns. After you've visited the Places of Learning, visit G1a which is southeast of N1 and then go underground at either E7a or E8a and visit G1b. The tower beyond wants 40,000 gold which you should be easily able to give. Once you have freed the hero, take the Vampire's Cowl and return to Leafhall to win. The hero that was jailed doesn't need to be the one to return it so you can give it to either Gem or Clancy and use Town Portal to return to Leafhall quickly