New Beginnings → After the Amulet

Acquire the Amulet of the Undertaker to win the scenario. However, if Gem or Clancy are defeated in combat, the scenario is lost. Your heroes are limited to level 15, but Gem and Clancy will carry their experience, skills and spells on to the next scenario. Starting Bonus: Blacksmith or 15 Wood or +1 Spell Power. 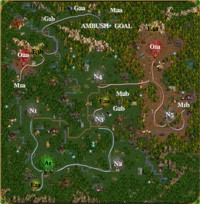 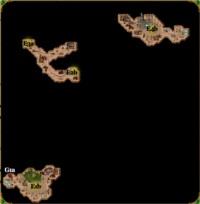 It's far better to take out the enemy than in trying to get the amulet to win the map. Give Gem the starting forces from Clancy and see if you can hire a Rampart hero to giver her even more. Flag the Wood and Ore resource mines near A1 and see if you can go underground at E1a to flag the Homestead and get more Wood Elves. Then get back to the surface and head north to claim the second Rampart town at N1. This town doesn't have a Fort and so I'd use it to build a City Hall for the gold. As to A1, I'd build a Homestead and then a Castle and then work on getting a City Hall. The second week upgrade to Grand Elves and Centaur Captains because they will be used to take over the next two neutral towns.

After giving Gem the troops and upgrading them at A1, go east along the blue path and past the Vampire Lords to take over N2 and then north to take over N3. The enemy will have to go by N3 in order to either invade your territory to go down E2a since that's the only way to get to O2a. So I'd start building up N3 and have Clancy use the Castle troops to defeat the enemy heroes that wander by. Unfortunately, there are a bunch of Scorpicores right in front of E2a and since they're so fast they will likely kill most or all of your Grand Elves if you decide to attack them. In addition, there are Dragons guarding E3a underground so even if you make it past the Scorpicores you have another powerful enemy facing you. One tactic is to wait until the enemy defeats the Scorpicores and goes underground. You then follow it and wait for it to defeat the Black Dragons and then you defeat the hero once their forces have been whittled down. This is chancy since the enemy could always decide to attack N3 instead but it's the easiest. While you're waiting you can flag the resource mines while building up your towns. I suggest building the Enchanted Spring and Dendroid Arches in your Rampart town the second week while you're waiting for the way to O2a to be cleared by the enemy.

In about week 4 give Gem all of the troops from A1 and send her back to N3 since the enemy will probably have cleared out E2a and you can follow them along the red path to O2a. Try to defeat that enemy outside of O2a if you can but take it over in any way you can and head south through the one-way mirror at M1a. You'll be at M1b in Necromancer territory to the east of N5 which has most likely been taken over by the enemy. Take over that town and defeat any wandering hero that's nearby. Then head north along the red path and take over O1a and defeat any enemy that's near. Unfortunately they will probably have gone through one of their garrisons and taken over N4 which means you need to follow them. The garrisons don't allow the use of any magic and have about two weeks worth of every Necromancer nonupgraded unit. After you defeat them you can take over N4 and hunt down any enemy nearby. There's a distinct possibility that the enemy will head south and try to attack N3 so having a good force of Castle troops is essential because it would take too long for Gem to return and she might not be able to take on another garrison and win. Once the enemy has been eliminated you can breathe a sigh of relief since most of the difficulty of this map is behind you.

Now that all of the enemies are gone, you can increase the levels of Gem and Clancy since they will both transfer to the next map. If you didn't do it in the first map, I suggest building level 3 Mage Guilds in every town and having both Gem and Clancy visit them all since there's a good chance of you getting a variety of nice spells. To finish the map, follow the purple path from O2a through G1b (be sure to visit G1a through E1a), past a School of War that both should visit, past the Ambush of 60 Bone and Ghost Dragons, and finally about 80 Ghost Dragons before you can grab the Amulet of the Undertaker and win the map.