Enough is Enough → Art of Persuasion

Unlike the Nature-based campaign in the original Heroes IV, Enough is Enough focuses solely on action and contains very little storyline. And much like the Mark of the Tiger scenario from the Elwin and Shaera campaign, it features some fast hit-and-run action where you will capture and lost castles over a short period of time. Enough is Enough features Erutan Evol (Nature Lover spelled backward, in case you have been wondering), a young elf who wishes to free his people from the Channon human tribes. But for this task he needs to convince his Elven neighbours of the purpose of his mission.

Erutan starts with a single city on the West side of the map. Expect some minor resource shortage, as Wood will be very scarce early on. The Elven people of Channon appear to have problems with cutting trees, which will dramatically slow your intial development. The Treetop Lodge is disabled in both your starting town and in the city that you will need to capture shortly.

The Ore Mine just to the East of your starting position should be your very first target, as it is lightly defended. Also, gathering lots of ore early on will compensate for the lack of wood. The Wolf Den on the West is another easy fight, but the experience you will receive should be more useful than the Wolves you will recruit. Money should not be a problem during that scenario, so hire enougn cannon fodder to protect your Beastmaster. Be especially careful with unprotected resources and structures, as a lot of Thieves have been spotted in the surroundings. The Fae Trees nearby will be quite valuable a bit later, but it benefits from a larger garrison. If you do succeed in freeing the dwelling, do not recruit Sprites just right away as you will need a lot of them in a minute.

You don't really have a choice regarding your creature selection, so go for a fast ground force and build the Tiger Den right away. Below is my building sequence for the starting town:

The amount of time you will need to build the Glade will vary according to how agressively you trade resources. Keeping reserves of Crystal and Gems might is not necessary, so get rid of them if you need some extra wood. Don't despair if your situation seems hopeless as Erutan will receive gifts on a regular basis, including 14 pieces of Wood on day 7 of the first two weeks. You might want to build a Tavern earlier and start training a second hero right away. Because of the layout of the map, using multiple heroes will make your life easier. 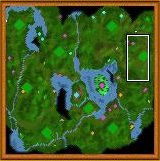 Once you have a decent army, head south and capture the small village nearby. A Town Hall will probably be the only structure you will build in that village, so don't even dream of a new fort. Afterwards, go back North a little until you come across a quest cave. Your mission, if you accept it, is to return with 150 Sprites, and you will be given a Gargantuan. This creature alone will be a decent alternative for the Elven Archers, so start gathering Sprites in your hometown immediately.

By now you should start seeing enemy scouts on the North and South East of the hometown. The computer lacks agressivity as usual, so you there is no real need to worry. You should immediatly travel to the North and capture the village nearby, as it produces a couple of elves each week. This three towns form a triangle that's easy to defend and provide a good basis to increase the size of your army.

Now is the time to expand your kingdom. Gather all your troops, chooses a path and start capturing enemy towns in a clockwise or counter-clockwise direction. The rest of the scenario involves picking up those enemy towns as quickly as possible and cutting reinforcements lines between the allied computer players. Splitting up your main army will be necessary, as the computer will use the middle passage to sneak through your towns. The city of Paradise can only be entered once the three main cities have been defeated. The scenario is won when you capture Paradise. To do so, gather all the troops from the Creature Portals (Mantis will do the job nicely).