Enough is Enough → The Sacred Vale

He you are again, on the West side of the map, with a small army and a serious shortage of wood. Get ready for another very open map where speed is the key. The difference this time is that there is no Ore around, which makes the development of your starting city even more difficult than in the previous scenario. Notice the prison close to your starting position, which will soon provide you with a strong ally. Based on the difficulty level you selected, you can rush to it immediately or be more careful and wait a little for reinforcements. 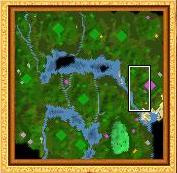 The map has the shape of a 9. There is a Preserve to the East of your starting position defended by a small squad of Elves, Wolves and Sprites. To the North, a Haven and two Strongholds can be found. To the South you will find two additional Havens surrounded by a river. The computer player might use the bridges or boats to attack you later on. To the Eastern side of the map lies a heavily defended Haven, which should be your final objective. I suggest you have Erutan focus on the Combat and Nature skills. Other skill development paths might be difficult to achieve and not very effective anyway.

Don't even try building a Fort in your starting city for now. Even with the pile of woods found to the south of your city, you should focus on improving your Mage Guild or another support structure. I was able to capture the Preserve to the right using range attacks and a stack of summoned white tigers. Fortunately, that city offers more development opportunities, but because of its uncomfortable position, you might want to save your resources for later. By the time I went back to my hometown for some exploration, two level 16 heroes appeared and got dangerously close and left me with no other choice than to attack them. I managed to beat them, but if you should fail, don't despair. The open map will allow you to quickly hit and run the enemy until the opposition is weak enough. Don't forget about the ferry located in the center of the map; the computer player will use it at times, and so should you!

No matter what the computer player does, you need to proceed to the North and capture the smaller towns, which unfortunately have limited development potential. I always carried a large army around and did not bother defending the towns at all. After you secure the three towns surrounding your starting city, the computer player will have a much harder time attacking you. Your next targets are the two Haven towns on the south part of the map. The towns are defended by high-level heroes, but getting those two cities is not only a requirement to complete the map, it will reduce the size of the garrison protecting the carryover artifact found in the Vale mentionned in the scenario's plot. For me, capturing the towns was much easier than originally expected, since a larger inside a boat was stuck on a bridge nearby. I doubt you will be as luck as I was.

Getting the Emerald Longbow in the Vale is critical to your success in the final map of the campaign, and will also make the conquest of the final city easier. If you manage to capture all enemy heroes, the final fight should not be very difficult.