Best Deals!
Today, 21:16 by Pol (312 replies)
in Hall of the Heretics
Missed 'Rayman Legends', really sorry - but for next just watch free games by Ubi at https://free.ubisoft.com/
Currently...

Kings Bounty II. - Devs Diary 2
Today, 19:57 by Pol (6 replies)
in News
They want to make a new genre of video game. There we have something like that, many years ago (Expo...

CH →
Walkthroughs →
Birth of a Barbarian → The Meeting
﻿

Birth of a Barbarian → The Meeting

Get Yog to Ulgak, the capital of Krewlod, to offer his services to Duke Winston Boragus and win the scenario. However, if Yog is defeated in combat, the scenario is lost. Yog is limited to level 15 but will carry his experience and skills on to the next scenario. 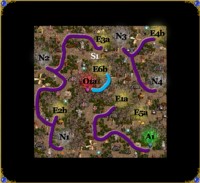 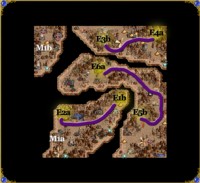 Take the Citadel as your starting bonus as it will help you get a Capitol earlier and it will hep you defend A1 in case any enemy hero decides to attack. This is another map with a fast start to pen the enemy in their starting town while Yog visits the Places of Learning and your towns hire troops for the final battles.

First build a Hall of Valhalla in A1 and have Yog visit it for +1 to Attack. Hire another Stronghold hero to give Yog more troops and have him follow the purple path. The Orcs by the first Orc building have a good chance at either running or joining you so hire more Orcs and continue to E1a. Diplomacy will be helpful as there are many opportunities for joins. Have the secondary hero visit the available mines and defend A1 if need be.

I recommend having Yog stand by the Garrison leading to O1a since there is a Magic Pond just a few steps away that the enemy will use. There seems to be one enemy hero with high stats and many troops that you want Yog to defeat. Once you've done that, all of the heroes that the enemy sends out will just be scouts. Once you have enough troops, give Yog the Ogre Magi and Behemoths/Ancient Behemoths and hire a secondary hero to give all of the other troops to. Have this secondary hero stand where Yog was and have Yog travel back on the purple path visit all of the Places of Learning, fight battles to gain ranks, and flag mines so you can continue building up N4 and hire more troops. Only Yog will move on to the next map so don't bother grooming any other heros. S1 will trade 50 Orcs (not Orc Chieftans) for 15 Cyclops which is a good deal so have Yog bring them along if you want to make the trade. Make sure to hire other heroes to visit Witches Huts so you don't give Yog a bad secondary skill on accident. Once you're finished with building up Yog, have him return to N4.

Give Yog any new troops, have him visit the Marletto Tower northeast of E5a for +1 Defense and then have him enter into E5a to get access to O1 without having to go through the Garrisons. You're now underground again by E5b, explore the area and follow the path north and west to find about 24 Behemoths protecting E6a. With your troops, you should have little trouble defeating them and in making your way up to E6b. You'll be right outside E6b and attack O1a, which should be as heavily defended as the other neutral towns were.