CH →
Walkthroughs →
Birth of a Barbarian → A Tough Start
﻿

Birth of a Barbarian → A Tough Start

Take the Sandals of the Saint and the Armor of Wonder to Alendora to win the scenario. However, if Yog is defeated in combat or you lose either component of the Angelic Alliance, the scenario is lost. Yog is limited to level 18 but will carry his experience and skills on to the next scenario. 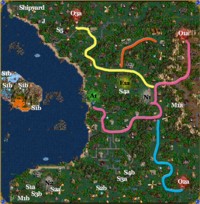 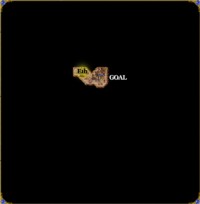 While your goal is to simply deliver two parts of the Angelic Alliance to Alendora, it's a good idea to first defeat the Tan enemy since they start out with three towns and a fourth within easy reach. I recommend taking the 3500 gold as your bonus so you can hire another hero and bolster your starting forces.

The Angelic Alliance not only dramatically increases all four of your primary abilities, but also casts Expert Prayer when you first get initative. The only threat you have to face are spells from enemy heroes, and since quite a few of them have some powerful spells, it's worth it if you are aggressive and take out the Tan enemy before it gets too dangerous.

Give all of the troops to Yog from the secondary hero and A1 and I suggest building a Hall of Vallaha and having Yog visit it as the +1 Attack never hurt and you're probably not going to come back to A1. Have the secondary hero flag the available mines while Yog travels along the pink path to N1. Be sure to stop by the War Machines Factory to buy a Ballista since it will be extremely powerful, especially if you have the Artillery skill. Once you've taken over N1, build creature generators and hire them all and continue on the pink path once you have hired the level 1-4 creatures. This is possible on day 7 so you can defeat O1a before they have a chance to hire the troops from that town. Then hire all troops from O1a that are left and return to N1.

You can either go north to take over O3a, return to N1 to get more troops, and then go south to take over O2a or reverse this and take over O2a and then take over O3a. Either way is acceptable although I recommend taking O2a before O3a. Just make sure to not leave any enemy heroes when you leave one town to take over another as there is an enemy hero with primary statistics in the low teens which you want to look out for. If you work fast, you can eliminate the Tan enemy in a little over two weeks.

S5 demands 15 Chaos Hydras before allowing you to pass and start on your quests so I recommend having Yog explore, flag mines, and visit Places of Learning. Be sure to follow the orange path to visit the Library of Enlightenment and the University. Also be sure to visit the two-way mirror M1a to appear at M1b. You can't get into N2 because the Guard Tower at S2a demands the Clover of Fortune which is to the east at S2b and very well-hidden. Once you get it, you can fight very light forces at N2 to take it over. The benefit is that N2 is fully built up which will help you in acquiring 15 Chaos Hydras. Once have all 15, head up to S5 which is southwest of O3a.

There is a jail located at J which you can free if you'd like, not that it matters since the hero doesn't travel with you but it's a nice gesture regardless. Take Yog and have him travel to the island in the middle of the water and get all four artifacts. The Guard Towers only let Yog through and the fources guarding them will be a piece of cake if you bring a good-sized force along. Once you're through, sail south again and dock north of N2 and visit S1a to receive the Orb of Inhibition. Take it to S3a by going through M1b to arrive at M1a and going east and south. You will then recive the Sword of Hellfire which S4a wants which is northwest which is blocking E1a. Head underground for the last Seer which is protected by about 35 Chaos Hydras and a Guard Tower which only lets Yog through. Break apart the Angelic Alliance by option-clicking it and give the Sandals of the Saint and the Armor of Wonder to Alendora to win the scenario.