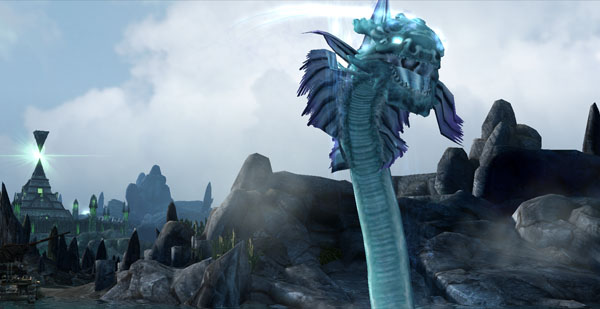 In this straight forward (surface only) mission, Irina needs to stop the Necromancers from taking over four towns. But there is really no rush in doing so. Three of the towns will fall immediately after the start of the mission; so there is nothing we can do. But then the Necromancers will ignore the final town. So we don't have to rush there, either. The Orcs are mostly our friends, although you can make some Orcs angry to your benefit.

There are not many towns and forts in this mission - well, there is only one fort. The Necromancers are the bosses, so artifacts that reduce morale will be useless against them. Just to keep the pressure on you, the AI will invade you through a one-way whirlpool; however, in my game, there was only one invasion near the beginning. You will also fight a large number of large neutral stacks. Tsunami is a great battle opener. Mass Regenerate during Time Stasis on the last enemy stack makes it much easier to achieve perfect victories in boss fights. 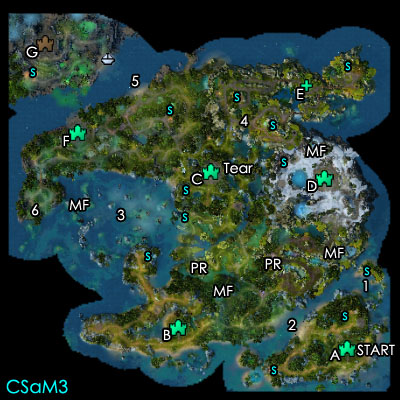 Sanctuary Campaign Mission 3
Level cap: 24
Difficulty Index: 3/6
Last updated: December 5, 2011
Dynasty Trait: My picks were just like before: free first generic hero, +3 core creature and +1 elite creature. In later missions, the first is still an excellent pick, since new heroes are way too expensive (and way too effective). On the other hand, I started leaning against +creature growth traits because I always run out of gold before I run out of creatures to hire. Unfortunately, there aren't more powerful +gold Dynasty Traits for higher Dynasty Ranks. 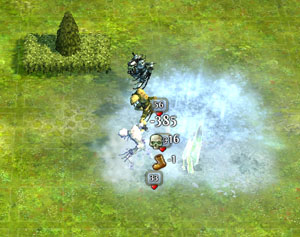 Irina starts beside Town A of the southeast corner. There is a Sawmill to the northwest and an Ore Pit to the northeast. You can make a round trip using any of the two paths leading to the west (as they will converge). The observation tower north of Town A reveals the exit of a one-way Whirlpool (1). Necro heroes will invade through here. If unchallenged, they will reach Town A two days after coming out of the whirlpool. That's pretty quick!

When you have finished business around home, head west to cross the straight at (2). The paved path to the north is blocked by Orcs, so head west first to face two Necro heroes. One will fight; one will run (you will see him later). Beat the Necromancer and take control of Town B without another fight. In my game, after about one week I was invaded by a weak Necro hero through the whirlpool at (1).

The "Free Orc Prisoner" quest should be activated now. The map will reveal the prisoners' locations, which are marked by PR on the map. The prison guards could be a little too tough for you. So don't feel rushed. You can tour Irina through Town B's territory to fight for resources and flag more buildings. The observation tower northwest of Town B will reveal a shipwreck-filled bay and a Blue hero at (3). 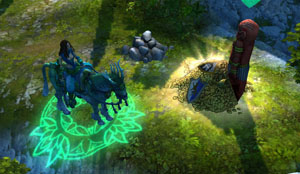 Soon you will obtain one of the four Moon Fragments in this mission marked by MF on the map. With all four fragments on the same hero, the game will reveal the location of the Tear of Asha (Tear), which can be installed inside your capital for nice effects. A reasonable time to get to the tear is after you finish freeing the Orc Prisoners. Neutral creatures guarding the later fragments could be quite a bit bigger than those prison guards.

Once you take care of the prison guards, you can earn Blood or Tear points by choosing whether to let the prisoners join (Blood path) or let the prisoners take over the city directly (Tear path). The Tear path saves work! After the Orc Towns (Town C and Town D) join, you can freely build them up, but can't convert them until you have freed both towns. It is a good idea to upgrade the money-making buildings right after receiving the towns (Level 3 Town Halls, Market) for profit.

As soon as you convert one of the Orc Towns (C or D), an angry Orc hero will turn aggressive at (4). He has a fairly powerful army, so it is better to postpone the town conversion until you are powerful enough to handle him. Practically, you can set Irina on a moon fragment-collection trip for the two northern fragments. By the time Irina reaches (4), convert the towns and send the now-angry Orc hero packing before his turn even turns up. 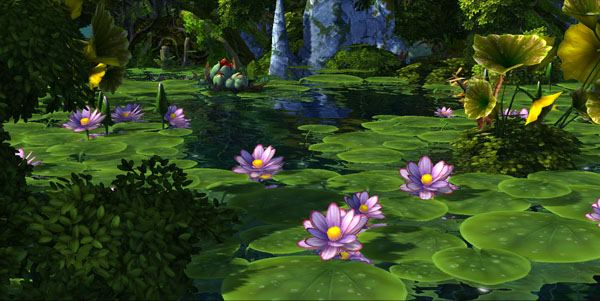 There is an optional Fort E still north from (4), controlling a rather large territory with a creature building to the very northeast and a gold mine to the west. When you are on your way to collect the moon fragment in the shipwreck bay, you can talk to a Blue hero at (5), but he only gives plot-related information. 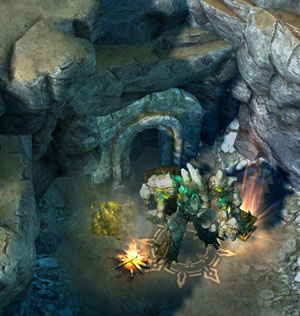 You can now take your time fighting neutral stacks and collecting stats boosts (s). The remaining enemy's number grows much slower than yours due to the power of the Tear of Asha. The fourth town to reclaim, Town F, isn't heavily defended, but the challenges that follow will be a little more difficult. You will notice a threatening fleet of Necromancers at the shore of (5), but they won't actively attack you. You can find another set artifact at (6).

After you own Town F and convert it, a Sea Dragon is summoned and the Necromancer's fleet at (5) is largely destroyed. There will be only two ships remaining for Irina to sink manually. Cross the straight to the northwest and enter another Necro faction's territory, where you might see additional Necro heroes roaming around. In my game, I even saw one Necro hero with no army (so that battle was instantly over).

The final boss is significantly more powerful than the rest of heroes you have seen so far, but he should not be even close to threatening your perfect victory. Before the final fight, remember to re-arrange your inventory so all your set-artifacts are in the first page (no scroll bar required), and you still need two 2 holes left. This is because you will be given two artifacts after the final fight (although only one is part of a set).