Might and Magic 6, 7, 8 merge based...
Yesterday, 23:06 by joanthedark (5107 replies)
in Might and Magic
We love and appreciate Templayer's hard work and dedication!
Make this a GitLab issue as well: "Templayer...

GrayFace MM8 Patch v2.4.1 [Sep 20,...
Yesterday, 20:12 by eilacomeva (215 replies)
in Might and Magic
It happens to everyone
btw, would you recommend trying the monstruosity?

MM7Rev4modR1 Redone
Yesterday, 14:49 by DaveHer (10 replies)
in Might and Magic
It looks like i am going to have to wait until after the weekend for the nexus to publish the game....

Star Trek Picard Series
Yesterday, 11:04 by Blake (10 replies)
in Campfire
Yeah.. episode 5.. wow.. If people here disliked it you don't have to worry about me arguing with you...

Fire Queen
21.02, 09:16 by {CH}ArticleBot (1 reply)
in Screenshots
https://www.celestialheavens.com/images/potd/FireQueen.png
They should leave Marvell...

“Well, a doctor cures people, the medic just makes them more comfortable. While they die.”
-Doc, Red VS Blue

Overview by This email address is being protected from spambots. You need JavaScript enabled to view it.

I know you probably groaned when you saw the word “priest”, but in Dark Messiah the Priestesses have a good variety of spells to both aid their allies and put the hurt on their enemies. Healing is simple and worth quick experience, and the heal spell’s dual function allows it to function as a damage spell if you target an enemy. A player can specialize in either the cure or curse function of the spell to improve one’s effectiveness at the cost of the other. At an early level you can actually resurrect nearby comrades at half health, but with a catch. When you die, so do the allies you have raised, giving them quite an incentive to keep you alive.

The Priestess sees souls like other characters see bodies, meaning she can spot cloaked Assassins. Priests are extremely valuable team members, though they are also generally targeted first by the enemy. They can heal themselves, but have little more durability than a mage beyond that, at least when their Stoneskin ability is inactive or if they haven’t caught the enemy in Thorns. Their damage spells are effective and easy to use, but don’t hit quite as hard as those of a mage or an archer’s arrows. Oftentimes you’ll find yourself needing more mana than you have, but there is no way to get any more of it.

Though Priestesses are more group-centric than other classes, they can still hold their own alone and are a fun and effective class. 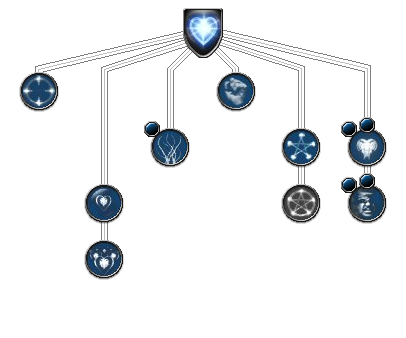 Tips by This email address is being protected from spambots. You need JavaScript enabled to view it.

Playing a Priest by This email address is being protected from spambots. You need JavaScript enabled to view it.

If you decide to play it support, stick with team members whenever you can, the more the better. Stay a bit behind the action, but make sure you’re not far enough back to make yourself vulnerable. Healing is easy, just hold down the left mouse and your target will either get hurt or healed, depending on whether they’re your friends or not. Just don’t hold it down without a target in your sights, as it will drain mana the whole time. The right mouse can be used to heal yourself. Spamming heal is a decent way to level up early on, and Curse is a surprisingly effective damage spell.

Thorns are ridiculously powerful. You can either throw them down at your feet to escape melee, or throw them near some approaching enemies to rack up kills with curse. Once you get resurrection, use it when it’s prudent, but not if you think you’re in a situation where you might die shortly after. Irresponsible ressing can make your team a little irritated with you, so if you’ve got people linked to you, stay a tad bit out of harm’s way. Stoneskin can help a little bit in cases like that, as it provides a surprising amount of protection, which in tandem with heal specialization can make you very hard to bring down as long as you have mana.

Essentially, the key to playing support properly is staying alive, but within line of sight of your teammates. If you keep your force resurrected and topped off in HP without dying yourself, it’s hard to lose a war of attrition. Mass resurrection can also be handy in situations like when ball lightning destroys three or four nearby friendlies, though you REALLY need to be careful not to die for awhile after dropping that spell.

If you’d rather play for damage, stick to open areas where you can more easily get a lock on other players. Keep thorns ready whenever possible, and get good at throwing them properly: it makes it much more difficult for them to get at you, and offers up a respectable damage bonus to your attacks.